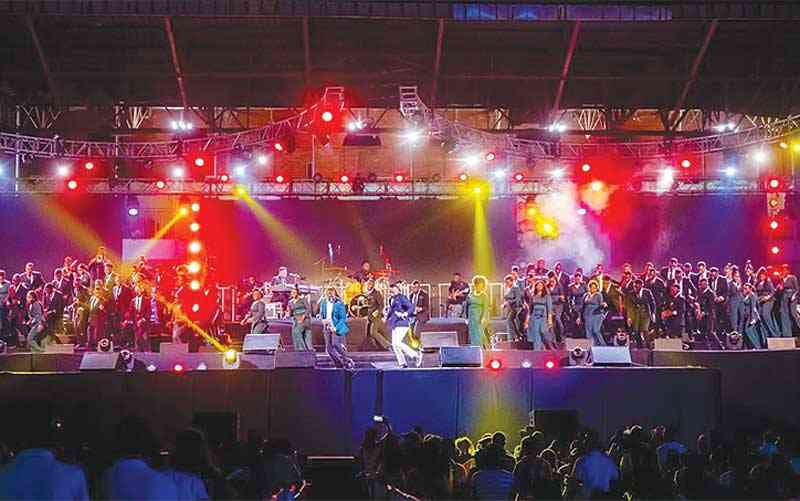 Zimpraise at the Glamis Arena

PACEsetting Zimpraise choral group says it enjoyed a memorable star-studded recording of its 15th live DVD album titled Jesus Christ The Great of All Times in front of an appreciative crowd at the Glamis Arena in Harare.

The stage was set at about two metres, giving the audience a good view of the acts. The dazzling stage lights transported the audience to a peaceful and harmonious make believe phenomenon where there is endless joy and praise singing.

The Msanzi-based Joyous Celebration Choir got the audience in spiritual mood, by performing Nini Ngiyabonga, Ujesu, Jesu Wakanaka among their popular but yet to be released songs.

Joyous Choir has been home to many Zimbabweans, including Eric Moyo who exported the Zion style of singing and dancing to South Africa and made it fashionable.

Zimpraise entered the stage with highly invitational hymns: How great though art, Great is thy faithfulness, Agere pachigaro mwari, Ishe tinotenda, Torumbidza zita renyu and the rhumba styled Mbiri which lifted the crowds onto the dance floor.

The audience was also thrilled by songs such as Munhu uri huruva and the solo saxophone rendition of the late great Oliver Mtukudzi’s Seiko.

Popular Pianist Nick Narev, who heads Pedagogy at a local music academy, was impressed with the quality of musical performances which included folk and classical set pieces.

By Winstone Antonio 20h ago
Couples must support each other: Mukaro