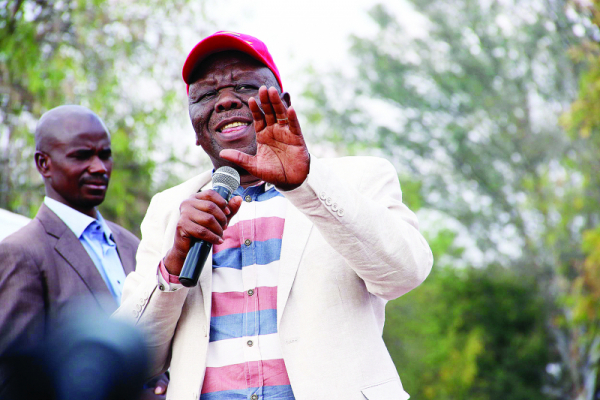 Thursday 16 November 2017 Today, I convened a meeting of the party’s Standing Committee in Harare to deliberate on the current situation in the country. Our country has been undergoing an extremely difficult period since the disputed and illegitimate election of 2013. Unemployment, poverty, corruption and cash shortages have become commonplace. At the centre of […]

Today, I convened a meeting of the party’s Standing Committee in Harare to deliberate on the current situation in the country.

Our country has been undergoing an extremely difficult period since the disputed and illegitimate election of 2013.

Unemployment, poverty, corruption and cash shortages have become commonplace. At the centre of this crisis, is a crisis of governance and leadership. It is a crisis of legitimacy surrounding the Presidential and general election in Zimbabwe. People demand and deserve change.

Over the years, Mr. Mugabe has presided over violent and rigged elections. Unfortunately, regional bodies have tolerated this for far too long. Mr Mugabe manipulates the voters roll, ballot papers and intimidates citizens mostly in the rural areas through unconstitutional means.

After four hours of deliberations, we took the following position; Noting that the endgame, the destination point to the resolution of the crisis in Zimbabwe is a total return to legitimacy and fully civilian rule through a credible, free and fair election under a truly independent and international supervision,

Acknowledging that national solutions to national problems are best sculptured by the people of Zimbabwe with the solidarity of the international community,

Further acknowledging and saluting the role played by the war veterans in the liberation struggle and recognizing that all we seek as the MDC is to complete the unfinished business of that sacred liberation war waged in our land,

Appreciating the assurances and the commitment to peace and the sanctity of human life by the Zimbabwe Defence Forces, including respect for citizens’ fundamental rights,

Fully conscious of the suffering of the people of Zimbabwe and in particular the concerns of the citizens including traditional leaders, the war veterans, liberation war collaborators, the church, civil servants, people living with disabilities, youth, women groups and the generality of ordinary Zimbabweans,

Aware of the concerns of the international community in particular SADC, the AU, the UN, the EU regarding the deteriorating Zimbabwean situation,

The party leadership restated the party’s values, especially its commitment to democracy and the need for a legitimate government that can immediately begin to transact the business of the nation.

The party leadership resolved and agreed on the urgent need for a roadmap to return to legitimacy that includes the following critical signposts:

1.That in the interest of the people, Mr. Robert Mugabe must resign and step down immediately in line with the national expectation and sentiment, taking full regard of his legacy and contribution to Zimbabwe pre and post-independence.

2.That there be a negotiated, all-inclusive transitional mechanism.

3.That the purpose, essence, nature and character of that mechanism be agreed upon by all national stakeholders,

4.That there be comprehensive reforms for a free, fair and credible election to be held upon the full implementation of all reforms,

5.That there be an agreed post-election framework to guarantee stability, peace and national prosperity,

6.That SADC, the African Union, the UN and the broader international community be the underwriters and guarantors to the roadmap to free and fair elections.

In full recognition of the ideals of our liberation war anchored upon respect for rights, dignity and one-man-one-vote, we respect the right of every citizen to vote freely and fairly in electing a leadership of their choice. For this reason, the party urges all Zimbabweans above the age of 18 to register and participate in the crucial on-going voter registration exercise. T

his is the only assurance to an irreversible path to national freedom, happiness and economic prosperity.

To our neighbours, you now all know the simple choice you face; either support our rights or our refugees. I thank You