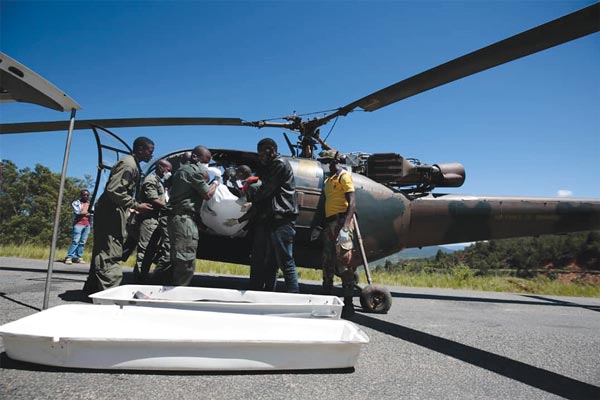 The death toll may not be known for months, but it is already likely to have run to hundreds and possibly thousands of people. The brunt of the disaster has been borne by the coastal city of Beira in central Mozambique, 90% of which has been reportedly destroyed.

It is inevitable that people will connect Idai and climate change. It is always tricky to establish a direct causal link, but thanks to the evidence provided by a number of reports from the Intergovernmental Panel on Climate Change (IPCC), including this most recent one from October 2018, we know that climate change is bound to increase the intensity and frequency of storms like Idai. At the very least, this crisis is a harbinger of what is coming.

Knowing this is a luxury that we must not squander. The IPCC estimates we have 12 years to prevent the earth’s climate from crossing the 1,5 degrees celsius warming threshold, beyond which the effects are likely to become significantly worse. We should be spending this time both trying to minimise the increase in global temperatures and making people more prepared for similar events in future.

The West has a duty to shoulder most of the burden here, for reasons I will explain in a moment. To do so, it needs to rethink its entire approach to international development.

The reality of disasters

Over the next few weeks, we may hear that Beira’s geography makes it particularly prone to natural disasters. We may hear that the region lacks an efficient early-warning system to alert its population. We may even hear some victim-blaming rhetoric that local people refused to leave despite being warned. Arguments like these all obscure a much more important explanation for what has happened.

It is not only the intensity of environmental disasters that makes them devastating — poverty also has a huge bearing on how things play out. Houses in poorer areas will often be less stable, storm barriers may be weaker, sanitation is often a problem, emergency services will be poorly resourced — and preventing disease outbreaks may be hindered by the poor state of public health services. The list of disadvantages goes on and on.

Good examples are hurricanes Katrina and Sandy in the United States. Katrina struck New Orleans and the surrounding region in 2005, while Sandy hit New York and New Jersey in 2012. Sandy hit a far more densely populated area, but the death toll was at least five times lower than Katrina and it only caused about half the damage.

While Sandy was a category three storm to Katrina’s five, this was certainly not the only reason for the disparity.

New Orleans, one of the poorest cities in the US, had poorly constructed levees, which were easily overcome by the flood. Many people did not have cars, so couldn’t evacuate easily when the authorities told them to.

The earthquakes that struck Haiti and Japan in 2010 and 2016, respectively, are another example. Both were of similar magnitude, but between 100 000 and 316 000 died in Haiti, while in Japan it was just 42. One reason the Haitian disaster was so much worse was the many thousands of unstable shanty houses in Port-au-Prince.

Inequalities within countries matter as well. The most vulnerable people are usually women, children, the poor, the elderly, ethnic minorities or indigenous people. Hurricane Katrina hit the elderly poor of New Orleans disproportionately hard, for instance, since they found it hardest to escape.

In all this inequality, the world’s wealthiest countries are heavily culpable. It stems from a complex economic system that disadvantages the Global South — not to mention the centuries-long experience of colonialism, the effects of which have hampered human development until this day.

In a world where 26 billionaires own as much wealth as the bottom half of humanity, the prospect of more frequent and intense climate disasters is only bound to exacerbate those inequalities. At the same time, Mozambique, Malawi and Zimbabwe contribute only a small fraction of the emissions that are causing such disasters. The West’s responsibility – along with other big emitters such as China – is, therefore, also a matter of climate justice.

Part of that responsibility lies in changing the current approach to disaster aid. In major donor countries such as the US and the UK, the guiding modus operandi of disaster relief has been reactive as opposed to proactive measures. The UK spent £1,2 billion in 2018/19 on emergency responses such as humanitarian interventions, while disaster prevention and preparedness has received a mere £76m.

In the case of Cyclone Idai, the Department for International Development has now earmarked £18m to assist humanitarian relief efforts in Mozambique and Malawi — tripling the original pledge from a couple of days earlier.

To be clear, humanitarian responses are absolutely key, but insufficient on their own. They bandage wounds rather than fix what caused them.

Instead, donor countries need to prioritise identifying the most vulnerable people both before and after a disaster, and ensure they receive the required support and are granted the agency to be actively involved in the process.

Besides the high-profile attempts to reduce global emissions, countries such as the UK should be offering support to poorer countries with everything from building flood defences to supporting social services to transferring technology.

They should be forgiving national debt, redistributing wealth or at least giving them preferential trade deals to help them adapt to climate change themselves.

This requires a rethinking, not just of humanitarian aid, but of development assistance in general.

Fortunately this is not just blue skies thinking on our parts. The House of Commons International Development Committee is currently reviewing the aid budget and considering an approach built around climate justice.

This emerging discipline is gaining traction and credibility around the world and will be the subject of a World Forum taking place in Glasgow in June. Ahead of that, Tahseen Jafry – one of the co-authors of this article – will be making a keynote presentation in New York in April.

In short, it feels like momentum is steadily building. The UK caused a disproportionately large part of climate change. Now it ought to show leadership by pioneering a new approach to development that has inequality at the top of the agenda.