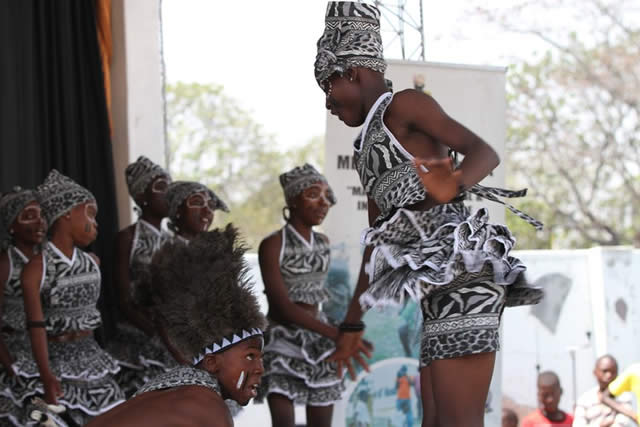 DOMBODZVUKU Primary School shrugged off stiff competition from nine other schools to defend their title for the fifth successive time, as they emerged champions again at this year’s edition of the annual Mbende-Jerusarema dance festival held on Saturday at Murewa Culture Centre.

DOMBODZVUKU Primary School shrugged off stiff competition from nine other schools to defend their title for the fifth successive time, as they emerged champions again at this year’s edition of the annual Mbende-Jerusarema dance festival held on Saturday at Murewa Culture Centre.

About 20 schools from Mashonaland East province and Murewa district participated when the festival roared to life on Friday before being trimmed to the final 10 for the second and final phase the following day.

Speaking at the festival, National Arts Council of Zimbabwe director Elvas Mari said Mbende-Jerusarema is a form of identity for Zimbabweans and people should continue to safeguard the dance by continuously practising it and ensuring that transmission process from generation to generation is a continuous process.

“Many cultural expressions of intangible heritage are under threat, endangered by globalisation and cultural homogenisation, more over by lack of appreciation among ourselves, support and understanding,” Mari said.

“I urge you to find ways of safeguarding those cultural aspects that are an embodiment of our values and norms. As communities, continue to practise and teach the next generations for posterity to save intangible heritage that is in danger of distortion and disappearance due to acculturation and commercialisation.”

In his address, Mari also saluted the schools that are teaching Mbende-Jerusarema dance.

“To all the schools that are practising Mbende-Jerusarema my profound gratitude for their commitment for they are not only complementing formal education, but also teaching practical surviving skills as well as knowledge about nature, religious beliefs and social values,” Mari said.

All the pupils who performed at the festival exhibited talent and great mastery of the Mbende-Jerusarema dance,a popular dance style practised by the people living in the Murewa and Uzumba-Maramba-Pfungwe districts in eastern Zimbabwe.

The dance is characterised by sensual and acrobatic movements by women in unison with men, driven by a single poly-rhythmic drummer accompanied by men playing woodblock clappers and by women hand-clapping, yelling and blowing whistles.

Mbende-Jerusarema dance was proclaimed a Masterpiece of the Oral and Intangible Heritage of Humanity by the United Nations Educational, Scientific and Cultural Organisation (Unesco) in 2005 with Murewa Culture Centre acting as the reference place for safeguarding purposes.

The brainchild of the late Chief Mangwende of Murewa, the two-day festival sponsored by Unesco and supported by National Arts Council of Zimbabwe has for years attracted huge crowds as well as a number of performing groups.

The festival was attended Ambassador of Nigeria to Zimbabwe Peter Isoa Iyamabo, several representatives of arts stakeholders and traditional dance groups among themwinners of this year’s edition of Chibuku Neshamwari traditional dance competition