‘Workers fed up with govt looters’ 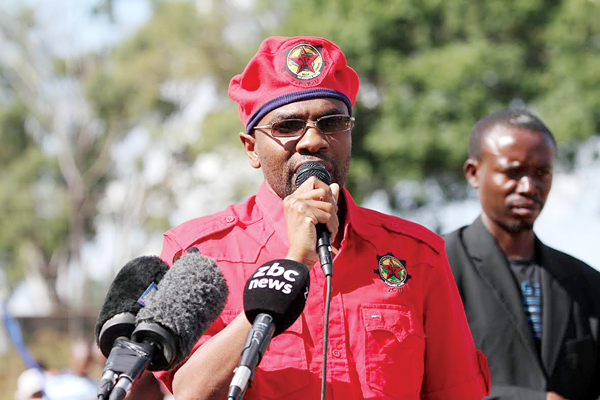 WORKERS in Bulawayo have said they are fed up with unfulfilled promises by government officials who are living large, while they live in misery and watch their children’s future being destroyed.

WORKERS in Bulawayo have said they are fed up with unfulfilled promises by government officials who are living large, while they live in misery and watch their children’s future being destroyed.

Speaking at the Zimbabwe Congress of Trade Unions (ZCTU) national consultations to map a way forward on the crumbling economy and poor remuneration last week, workers said their salaries had been eroded by inflation and could not sustain them and called for immediate action, including indexing wages to the green back.

ZCTU president Peter Mutasa (pictured), who led a delegation to Bulawayo, said workers had to wait for the announcement of a protest date to stop government from looting, while making them poorer.

One attendee said: “Going to work is just a matter of hoping that if the situation improves we have our jobs, otherwise staying at home is now better.”

Another worker added: “We are fed up and can no longer accept being sacrificed by those looting national resources.”

The disgruntled workers said setting a minimum wage would not work as long as there was no stable currency.

The workers also lamented that prices were going up every day and demanded that Statutory Instrument (SI) 142 must go, describing it as a monster that has piled misery to their families.

Last June, the Reserve Bank of Zimbabwe introduced SI 142 of 2019, which officially made illegal the use of all foreign currencies as legal tender.

“We need action sooner than later in order to strike the iron while it is still hot as the situation is no longer sustainable to us,” another worker said.

Mutasa concurred that workers were fed up and could no longer accept being sacrificed by those looting national coffers.

“Workers used to be bread winners, but when (Finance minister) Mthuli Ncube came in with his SI 142, workers can no longer afford to go with bread to their families. We have to stop the government from looting,” he said.

“I have come to tell you that we are not going to take an easy path, they are going to kill us, jail us and even if they kill us, you must continue with the struggle. Zimbabwe is not independent.”

Mutasa said there was serious State capture as those in charge seem to be selling everything to China and Russia while their own people were left with nothing.

“We have to force them to stop destroying the future of our children and workers should refuse to eat vegetables and potatoes. It is not a balanced diet, but we can eat them at our own choice,’’ he said.

Mutasa indicated that if the country dollarises, the Chinese would loot the dollar.

He said it was better to adopt the rand, at the same time lamenting that some companies linked to the ruling elite no longer wanted the local currency and obtained licences to sell in forex, while ordinary citizens are not at liberty to do the same.