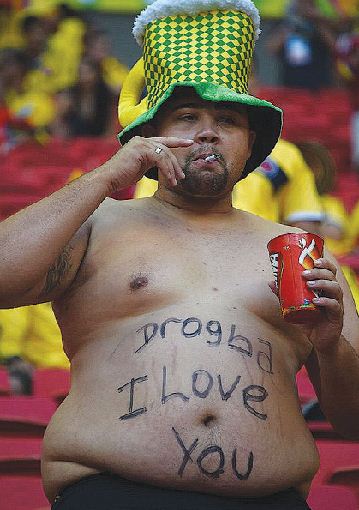 GARRINCHA — Colombia are dangerously lying in wait for England even if Roy Hodgson’s men do make it to the knockout stages of the ongoing World Cup football finals.

Colombia top Group C with six points and will win it with a draw against Japan in their final match on Tuesday.

That would set up a last-16 tie against the runners-up of Group D — which could be England, who were playing Uruguay last night. The Africans could also qualify for the knockout stages if they beat Greece in their final group game and they would have been lifted by a solo goal by former Arsenal striker Gervinho that set up a tense finish.

Both sides had started Group C with victories and the tens of thousands of Colombian fans who’d made the pilgrimage to Brasilia were in particularly optimistic mood.

Ivory Coast, the only African team to have won their opening fixture by beating Japan 2-1, named English Premier League stars Toure, Cheick Tiote and Bony in their starting line-up.

The Swansea striker, who scored 25 goals last season, was largely anonymous and made way after an hour for Drogba Colombia’s electrifying pace throughout their side make them one of the best counter-attacking teams in the tournament with Monaco’s Rodriguez — a reported Manchester United target — and Fiorentina’s Juan Cuadrado the best player on the pitch.

The contrasting styles of the two sides made for an intriguing rather than thrilling first half, but Ivory Coast failed to put 38-year-old Colombian defender Mario Yepes under enough pressure.

Even Toure was subdued with the Manchester City powerhouse coming off second best as he was shadowed by Colombia’s Carlos Sanchez. Colombian pressure finally told in the second half. Referee Howard Webb correctly booked Didier Zokora for a crude challenge, the former Spurs midfielder’s second yellow card of the tournament to rule him out of their final group game.

Cuadrado’s shot from an acute angle was uncomfortably flipped onto the post by Ivorian goalkeeper Boubacar Barry and The Elephants manager Sabri Lamouchi decided to send on Drogba to try and stem the tide.

It didn’t work and Colombia went ahead after 64 minutes. Fittingly, it was man-of-the-match Cuadrado who took the right-footed corner with swerve and power and Rodriguez climbed above Zokora to head in with a terrific leap, Barry only helping to push the ball into the roof of the net when he got a hand to it.

Cue, the now-famous Colombian team celebration, singing and dancing in a line.

Six minutes later, a killer second goal arrived. Ivory Coast made a hash of a set-piece and Colombia robbed Die of possession and roared forward with Quintero running behind a static defence to score.

Ivory Coast looked dead at that stage but Gervinho suddenly exploded into life, forcing his way past three defenders before flashing a shot past David Ospina from eight yards.

It led to an uncomfortable last 15 minutes for Colombia as Ivory Coast poured forward in desperation with ex-Chelsea forward Salomon Kalou also on.

And in injury-time there was drama when Yepes stumbled and Drogba was just beaten to the loose ball by Ospina who came racing out of his goal. — Daily Mail