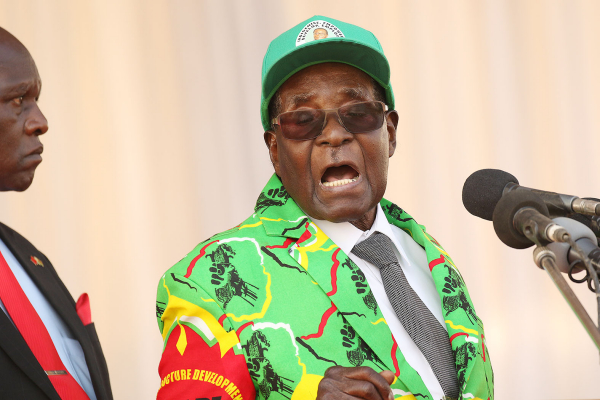 FORMER President Robert Mugabe is set to appear before Parliament to expand on the allegations he made in 2016 that $15 billion worth of diamond revenue went missing.

FORMER President Robert Mugabe is set to appear before Parliament to expand on the allegations he made in 2016 that $15 billion worth of diamond revenue went missing.

The issue came out yesterday in Parliament during a sitting of the Mines and Energy Portfolio Committee chaired by Norton MP Temba Mliswa.

Mliswa said Home Affairs minister Obert Mpofu, a former Mines minister, and his successor, Walter Chidakwa, would also be summoned for grilling over the disappearance of the diamond revenue during their tenure.

“There are no sacred cows in terms of the oversight role of Parliament, and there is nothing that even stops us from calling Mugabe, who first mentioned the issue of the $15 billion, from appearing before Parliament and asking him how he came to know about that,” Mliswa said, without specifically mentioning when Mugabe would be summoned.

“As a new minister, Chitando might not have an answer now on the issue of the $15 billion, but, as Parliament, we have a right to call anyone who is responsible for oral evidence, including Mugabe, Chidakwa and Mpofu, who were Mines ministers when the diamonds were said to have disappeared,” Mliswa said.

He said several players would be questioned, including institutions that benefited from mining concessions in Chiadzwa, among them the army and the police.

The Privileges, Immunities and Powers of Parliament Act and Parliament Standing Rules and Orders allow Parliament to summon anyone for oral evidence, except the sitting President, meaning Mugabe can be called to appear before Parliament.

In a birthday interview in 2016, Mugabe claimed $15 billion worth of diamond revenue was unaccounted for, a claim that continues to dominate political discussions on accountability.

Musikavanhu MP Prosper Mutseyami (MDC-T) raised the issue of the missing $15 billion with Chitando, demanding that the new minister gives the committee records of diamonds sold, the amount diverted through illicit financial flows and smuggling.

He claimed some diamonds were being kept at the Reserve Bank of Zimbabwe (RBZ) instead of the MMCZ, which was against the MMCZ Act.

But Mliswa said the issue was too big to handle for Chitando, who is new in the ministry, adding that it would require thorough investigations.

The only figures of diamond mining revenue, which Chitando revealed to Parliament, were that in 2016 ZCDC, a subsidiary of ZMDC, produced 961 000 carats, which doubled to 1,8 million in 2017, adding that this year, the company was expected to produce at least three million carats.

Chitando told the committee that capacity utilisation across the mining sector was low in most minerals except platinum, although he did not get into specific details.

It was also revealed that there were several legacy issues bedevilling the mining sector, including mines that were operating illegally.

ZCDC chief executive officer Morris Mpofu said selling of diamonds was done through the Kimberly Process, which has the figures of Zimbabwe’s 2006 to 2014 sales on their website.

Mpofu said to date, ZCDC had compiled a list of 10 people alleged to have been involved in illicit diamond trade in Mutare and the names would be handed over to the Home Affairs ministry for possible investigation.

Masvingo Urban MP Daniel Shumba (Zanu PF) then quizzed MMCZ to explain allegations that the country’s diamonds were at RBZ vaults and not at the corporation’s vaults as required by the law.

“There was an attempt for them to end up at RBZ, but that did not happen. As we speak, they are being evaluated at MMCZ,” he said.

“The involvement of the RBZ was that diamonds must be at MMCZ, but the RBZ has security interests in the diamonds so that when they are sold whatever is owed is paid.”

MPs were also told by Zimbabwe Mining Development Corporation (ZMDC) board chairman David Murangari that the ZMDC board was not consulted when ZCDC was formed and made one of its subsidiaries.

Murangari also shocked MPs when he said 75% shareholding of asbestos mining company Shabanie Mashaba Mines (SMM) was under ZMDC, but he said he did not know who owns the remaining 25% shares of the comatose mine.

The issue opened a Pandora’s box over different legacy and corporate governance issues that Chitando will have to deal with, and several questions over several mines under the ZMDC which were operating illegally.

“We only got to know of our being ZCDC’s shareholder by copy of a letter, which unfortunately was sent to our corporate secretary and was not addressed to the board chairperson, and I then spoke to former Mines secretary Francis Gudyanga to operationalise it so that the board could move forward with that role.

“There was no board consultation and ZMDC was only informed last year and the papers to form ZCDC were done without our knowledge to the extent that I surprisingly found my name on the papers without my knowledge,” Murangari said.