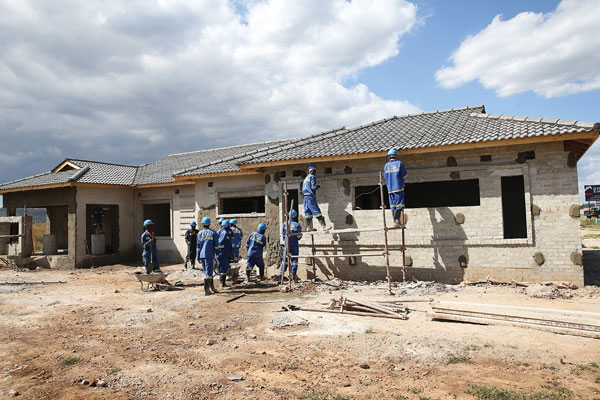 National cement demand has surged since the second half of last year, driven by a reported bubble in mortgage and construction activity, amidst mounting supply-side challenges related to foreign currency shortages for the procurement of spare parts.

National cement demand has surged since the second half of last year, driven by a reported bubble in mortgage and construction activity, amidst mounting supply-side challenges related to foreign currency shortages for the procurement of spare parts.

A statement released by the Cement and Concrete Institute of Zimbabwe (CCIZ) yesterday indicated that the industry may not be able to cope with the rising demand, estimated at 30% year-to-date since the same period last year, unless foreign currency shortages were addressed to reduce plant downtimes.

“The construction sector in Zimbabwe has been experiencing significant growth since July 2017. This has resulted in a significant increase in cement demand, estimated to be at 30% year-to-date versus same period last year,” CCIZ said in the statement.

“The sharp rise in demand requires that all cement manufacturers operate their plants at 100% capacity utilisation to satisfy the market. This is, however, not possible due to incessant plant breakdowns caused by spares shortages.

“Under the current economic conditions, the industry has been facing significant challenges in procuring spare parts from foreign suppliers as access to foreign currency remains difficult.

“This has, therefore, caused delays in the turnaround time for attending to breakdowns, limiting our capacity utilisation significantly. We are appealing to relevant arms of government to assist in facilitating priority allocation of foreign currency so as to expedite procurement of the required spares and equipment.”

Currently, the country is experiencing an acute shortage of cement, which has sent the prices skyrocketing.

Some of the cement has already found its way to the parallel market where it is sold at varied prices, depending on the mode of payment, whether RTGs, bond notes or foreign currency.

CCIZ explained that the spike in demand had mostly been influenced by a boom in mortgage finance as an increased number of banking institutions expanded their loan books and took new positions in property development.

Boosted by the command agriculture programme, earnings from the maize and tobacco marketing season have further boosted the appetite to spend on building and construction. The supply-demand outlook points towards massive shortages, given pipeline construction projects by the government.

CCIZ said it would make every effort to ensure that the market is served optimally as production challenges are resolved.

“We implore traders to desist from inflating the retail price of cement and to abstain from trading cement on the black market in order to maintain market stability. We are committed to ensuring that production and supply of cement returns to normal as soon as possible.”