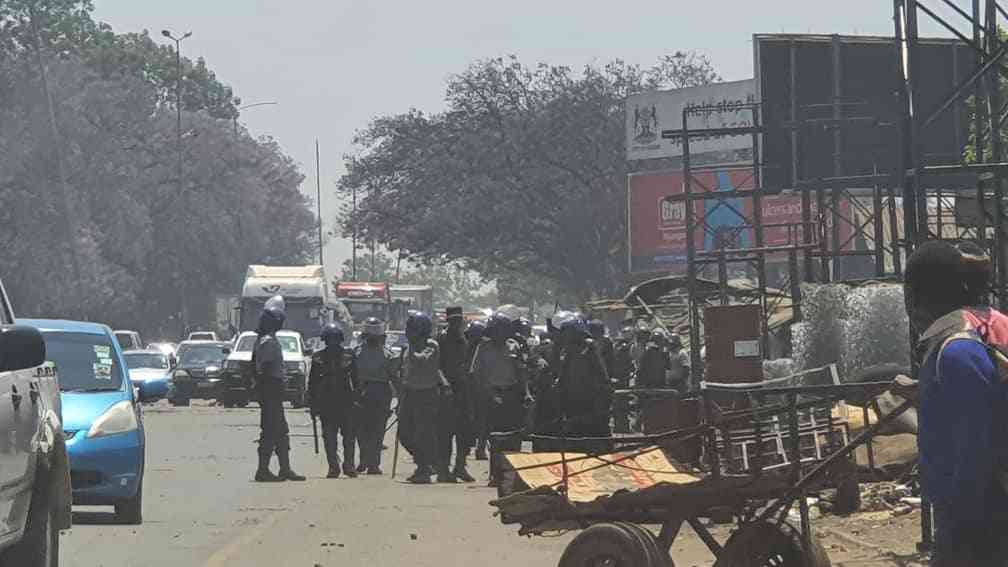 POLICE yesterday went door-to-door arresting Citizens Coalition for Change (CCC) and Zanu PF suspects who have since Friday been causing mayhem at Mupedzanhamo flea market  in Mbare, Harare — burning rivals’ vending stalls and attacking each other with stones as fights for vending space turn nasty.

When NewsDay visited the scene yesterday, riot police were picking youths that had fled the scene and sought refuge at Matapi flats.  They were still detained at Matapi Police Station at the time of going to print.

Yesterday’s violence follows intense fights between Zanu PF and CCC youths on Friday night and Saturday, which resulted in Mupedzanhamo flea market being set on fire as the rivals accused each other of grabbing vending sites in the high-density suburb.

One Zanu PF supporter was injured in the melee and was rushed to Sally Mugabe Central Hospital where his condition could not be ascertained yesterday.

National police spokesperson Assistant Commissioner Paul Nyathi said he was not aware of the incident.

“I haven’t received any information yet on the Mbare fights. Can you call me tomorrow,  I’ll be having full details,” Nyathi said.

Harare provincial police spokesperson Inspector Julius Chakanza also said he was yet to get a report on the issue.

The conflict between Zanu PF and opposition supporters at the popular Mupedzanhamo flea market dates back to the COVID-19 lockdown period  when vendors were ordered out of the designated market site as a measure to contain the spread of the virulent disease.

“We cannot continue with the wild west mentality that is in Mbare. People are being victimised, spaces being taken and it is difficult to provide services to Mbare.  We need a solution to the issues of Mbare, which includes all stakeholders to come up with an infrastructural, social and economic plan that serves the interest of the residents,” he said.

Vendors have in the past raised concern over the Mupedzanhamo flea market, saying it was mired in political contestations, which has resulted in the flea market being shut for many years, forcing vendors, mainly those that sell second-hand clothes to clog sidewalks around the capital.

In 2015, Zanu PF activists blocked the official ground-breaking ceremony for the construction of an Asian-funded US$40 million state-of-the-art mall opposite the flea market, saying they were not informed about the project.