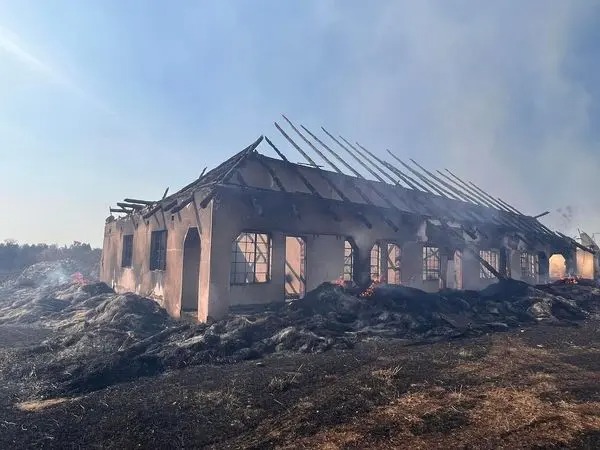 Midlands provincial police spokesperson Inspector Emmanuel Mahoko was not answering his mobile phone when efforts were made to have him shed more light on the incident.

BY STEPHEN CHADENGA GWERU’S Eland Lodge (formerly Elephant Lodge) owned by the late Gweru businessman and Citizens Coalition for Change politician Rodrick Rutsvara was on Wednesday afternoon burnt down by a veldfire, which destroyed property worth thousands of dollars, Southern Eye has established.

Midlands provincial police spokesperson Inspector Emmanuel Mahoko was not answering his mobile phone when efforts were made to have him shed more light on the incident.

But a witness told this publication that a veldfire severely damaged nine thatched buildings and booking rooms at the lodge located along the Gweru-Mvuma Road.

“The veldfire spread to the lodge and destroyed nine buildings,” Nomore Sithole, who stays near the lodge, said.

Reports indicate that fire brigade teams from Gweru City Council and the Airforce of Zimbabwe stationed at the Josiah Tungamirai Airforce base a to save four buildings.

When the Southern Eye crew visited the scene yesterday, workers at the lodge were still in a state of shock.

“The establishment was operating well since it opened doors to the public 15 years ago and we never anticipated this,” said one worker.

Meanwhile, Gweru residents have criticised their council for charging some of its services in foreign currency, saying the move would disadvantage ratepayers who are struggling to pay bills owing to worsening economic challenges.

In a statement dated August 5, Gweru Residents and Ratepayers Association (GRRA) said: “This has sparked discontent among residents following council’s move to charge some of its services in United States dollars despite the clear provisions of the law of Zimbabwe penalising refusal to accept Zimbabwean dollars.

“Councillors and management’s move to hike tariffs without consultation is insincere and insensitive to the plight of the residents of Gweru. Zimbabwe’s socio-economic situation has been worsening as evidenced by rising inflation and stagnant wages which are paid in local currency.”

GRRA said over 90% of the population in the Midlands capital was in the informal sector where they earn well below the poverty datum line. At a recent stakeholders meeting, deputy mayor Cleopas Shiri said the country’s inflationary economic environment had grounded council operations, which had forced the local authority to charge its services in foreign currency.

By Tafadzwa Kachiko 14h ago
6 succumb to diarrhoea