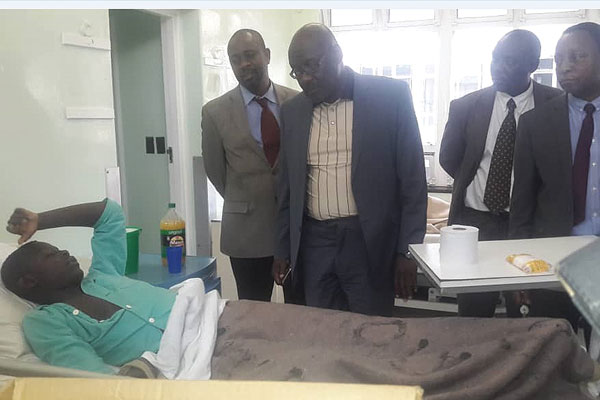 The outbreak comes as most local authorities are struggling to provide clean water and collect garbage citing financial challenges, raising fears of a repeat of the 2008 outbreak where the waterborne disease claimed over 4 500 lives countrywide in what was Africa’s deadliest outbreak for nearly two decades.

Parirenyatwa, who visited some of the patients admitted at Beatrice Road Infectious Diseases Hospital, said the city’s health department was working round the clock to contain the outbreak.

“One person died on admission here, while there are four suspected community deaths which are being investigated by the Harare City team, but 11 cases of those admitted have been confirmed to be cholera after tests,” Parirenyatwa said.

The Health minister said they were following up on all people who were in contact with the victims to stop the disease from spreading.

Parirenyatwa, who also urged people to practise good hygiene, last year said 95% of boreholes in low-density suburbs were contaminated with faecal matter, with users at the risk of infection.

“I want to warn people on personal hygiene. Make sure the water you are drinking is safe because if you don’t have water that is clean, water that is potable then we have this problem that we are facing. So it’s usually a problem of water, contaminated water,” he said.

“These people were drinking water from, we suspect, one or two boreholes that our team has already gone to take samples from to make sure that if those particular boreholes are contaminated they will be decommissioned for now until they are safe.”

A doctor who spoke to NewsDay on condition of anonymity said the outbreak was from an area serviced by a borehole surrounded by uncollected garbage.

Glen View residents also blamed council for the cholera outbreak saying the uncollected garbage piling up at Tichagarika shopping centre could be the source of the waterborne ailment.

The country is also grappling with a typhoid outbreak in Gweru, Zvishavane, Kadoma and Masvingo. Chegutu was the last town to suffer a cholera outbreak at the beginning of the year, resulting in five deaths.