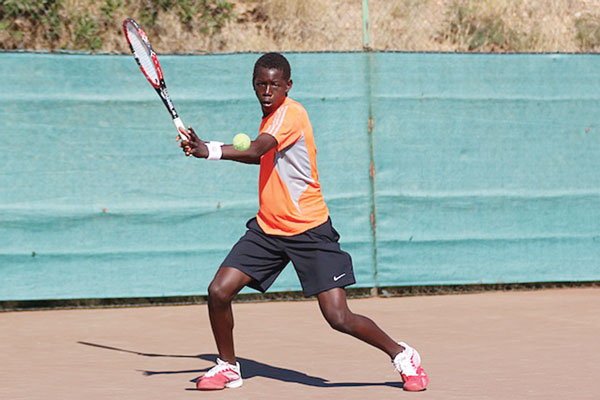 Syria’s top player Hazem Naw’s 6 – 3 6 – 3 victory gave the visitors a shock lead which was, however, short-lived after Benjamin Lock pulled Zimbabwe level with an identical 6–3 6-3 win over Amer Naow as the two teams finished the first day level.

Zimbabwe was hoping to end the first day two nil up against little known opponents to remain in the World Group II.

However, Garanganga, who was scheduled to play the first match following Thursday afternoon’s draw, aggravated a knee injury he suffered on Tuesday on the eve of the Davis Cup.

Sibanda was expected to hold his own against an opponent ranked lower than him, but could only last one hour three minutes.

In the second rubber, Syria pulled out their number two Yacoube Makzoume and sent in Naow, who was no match to Lock losing in 1 hour six minutes.

Benjamin Lock acknowledged the pressure he had after Zimbabwe fell behind after the first rubber.

“We had a tough start and they went up 1–0 so the pressure shifted from them to us. I knew there was a lot riding on the match; we didn’t want to go 2–0 down,” Benjamin said.

Benjamin is set to team up with young brother Courtney for the doubles rubber which kicks off today’s action before the reverse singles later in the day.

The Zimbabwean is relishing the doubles rubber which will be a major factor in deciding the direction of the match.

“I think Courtney and I are more than ready for the doubles. To be honest doubles is our strongest point, so we are really looking forward to it. I think we are in a very good position and very excited to play the doubles,” Benjamin said.

The reverse singles rubbers should see Benjamin Lock play Sibanda’s conqueror Naw, while Sibanda may have another go against Naow in the final action of the day.