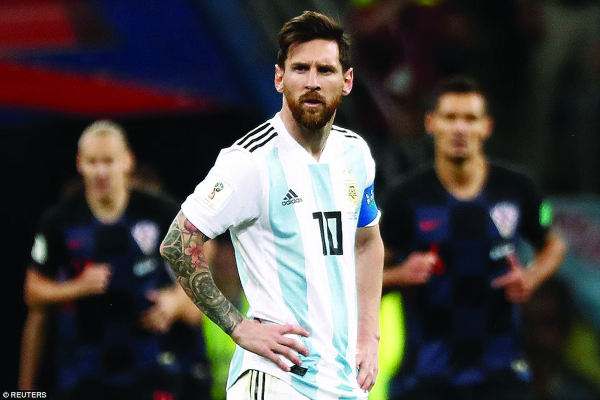 Jorge Sampaoli held his head in his hands. Lionel Messi stared at the floor.

Moscow — Jorge Sampaoli held his head in his hands. Lionel Messi stared at the floor.

The rest of the Argentina players were speechless, gazing aimlessly into space with their hands on their hips as Croatia celebrations broke out all around. Luka Modric had just filed a contender for goal of the tournament and twisted the knife in the process, leaving Argentina, twice world champions, on the brink of elimination. By the time Ivan Rakitic added a third, in the closing minutes, Argentina were broken.

Their fate now rests in the hands of others after a humiliating defeat that brutally exposed the limitations of this Argentina team. It is hard – almost impossible – to imagine how Sampaoli and his players can possibly recover. Messi was a passenger throughout, lost in a game that had turned into a chastening experience for everyone in an Argentina shirt, but in particular goalkeeper Willy Caballero, who made a calamitous mistake to gift Ante Rebic the opening goal.

Argentina, in truth, never looked like responding, as their supporters – here in such huge numbers – wiped tears from their eyes.

The last time Argentina failed to win either of their first two World Cup games was 44 years ago.

Croatia, in contrast, were in dreamland. They can now look forward to a place in the last 16 after winning back-to-back World Cup matches – something they have not achieved since 1998.

Argentina knew what was on the line here – and it showed.

They looked tense and nervous from the outset, unable to get control of the game early on – unable to get Messi involved – and were wide open on the flanks, where space opened up for Croatia to attack almost at will after Sampaoli, under pressure and heavily criticised back home, had decided to roll the dice.

The four-man defence favoured by the Argentina players and deployed in that uninspiring draw against Iceland was gone.

So were Lucas Biglia, Marcos Rojo and Ángel Di María as Argentina reverted to a three-man defence.

It was a tactical gamble and hard to see from an early stage what Sampaoli was trying to achieve, particularly with Messi playing in a more advanced role that left him isolated and on the periphery for long periods. Sampaoli, who was dressed like a man who fancied a trip to the casino, paced up and down on the touchline throughout, turning on his heel in frustration again and again.

High up in the stands, Diego Maradona threw his arms around in exasperation.

It was that sort of Argentina performance. They were flat, devoid of ideas and seemed to be pinning their hopes on Messi, who was struggling to even get on the ball, let alone bend the game in their favour, produce something out of nothing.