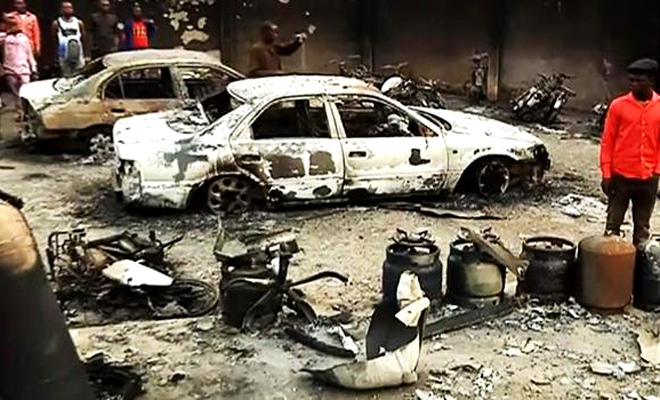 Tens of people were killed in an explosion at a gas plant in southern Nigeria, the presidency said on Friday, with one journalist putting the death toll at 100.

Tens of people were killed in an explosion at a gas plant in southern Nigeria, the presidency said on Friday, with one journalist putting the death toll at 100.

The blast occurred on Thursday when a truck was discharging butane gas at the facility in Nnewi town in Anambra state as a crowd of customers refilled gas bottles on Christmas Eve, residents said.

President Muhammadu Buhari’s office said “tens of people” who had been looking forward to their Christmas celebrations had been killed, without giving a precise toll.

One local journalist at the scene, David Onwuchekwa, said: “I saw around 100 charred corpses.”

Most of the dead were customers at the plant or people who lived nearby, he added.

Carl Ofuonye, another local journalist, said the blast had been sparked when the truck exploded while discharging gas.

“So many people were in the building, workers at the plant, people who came to buy gas,” he said. “A woman and a child in a nearby building died.”

Many others were being treated for burns at nearby hospitals.

“I saw flames but I didn’t know (what was going on) and started running and then I heard an explosion,” the wife of the manager of a nearby construction site told local TV station Television Continental. “Even while running the fire…burnt me all over.”