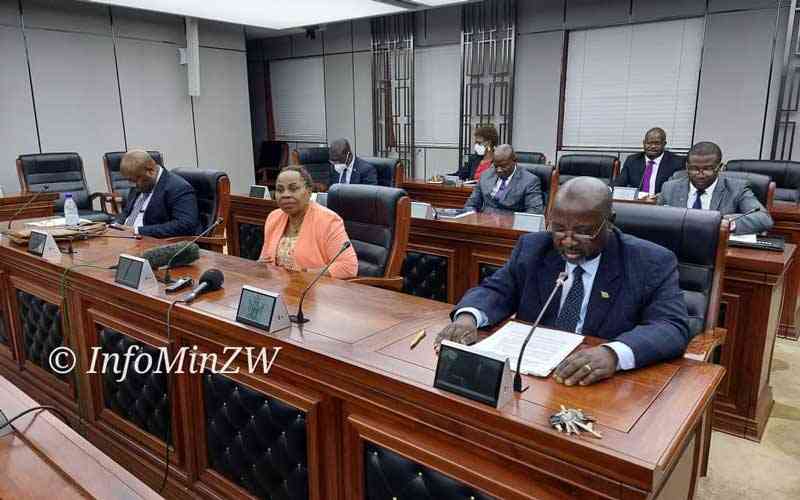 ZIMBABWE’S RESPONSE TO THE COVID-19 PANDEMIC, AND REPORT ON THE PROCUREMENT AND ROLL-OUT OF VACCINES

Cabinet received an update on the Country‘s Response to the COVID-19 Pandemic and a Report on the Procurement and Roll-Out of Vaccines,  as presented by the Chairman of the Ministers’ Committee on the National COVID-19 Response, Vice President and Minister of Health and Child Care, Honourable Dr. C.G.D.N. Chiwenga.

The nation is advised that, as at 4 December 2022, the country’s cumulative cases since the outbreak of COVID-19 in 2020 stood at  259 356, with 253 241 recoveries and 5 622 cumulative deaths. The recovery rate was 98%, with 493 active cases having been reported. The scientific indicators show that the pandemic remains under control. The country, nonetheless, should remain vigilant against COVID-19.

Accordingly, provinces will strengthen the implementation of COVID-19 vaccination during the ongoing poliomyelitis vaccination campaign and ensure that all stakeholders including political leaders, local authorities, partners and donors are mobilized for this exercise. Enforcement of COVID-19 regulations will also be strengthened, especially during the festive season

Regarding the national vaccination programme, Cabinet wishes to inform the nation that, as at 4 December 2022, a total of 6 574 434 first doses of the COVID-19 vaccine had been administered, while 4 924 009 people had received their second dose, and 1 253 395 their third dose. This translates to a national coverage of 58.5%.

The country should therefore remain focused and continue pushing for higher vaccination coverages in order to provide maximum protection to all citizens. A strengthened vaccination plan and electronic register that enables vaccination teams to easily identify and follow up those who have not yet received their second or third dose is due for introduction, and the Ministry of Health and Child Care will update the nation progress made.

This approach will not only help to increase the COVID-19 vaccine uptake, but will also strengthen the under-five year old Expanded Programme on Immunisation.

The country’s total wheat stocks stands at 211 049 metric tonnes, being 176 549 metric tonnes held by the Grain Marketing Board (GMB) and 34 500 metric tonnes by millers. This will provide 8.4 months’ cover at a consumption rate of 21 000 metric tonnes per month. The cumulative harvested area of the 2022 winter wheat crop stands at 76 000 hectares, which is 94% of the planted area, with the total production standing at 358 978 metric tonnes of wheat.

Meanwhile, cumulative grain sales of maize, wheat, soyabeans and traditional grains by the GMB since April 2022 amount to about ZW$25 billion, comprising 236 725 metric tonnes. The private sector has purchased 145 489 metric tonnes of grain. Cabinet reassures the nation that the available grain stocks indicate that the country is food secure.

Cabinet received and adopted Sundry Updates of the Mining Sector as presented by the Minister of Mines and Mining Development, Honourable Wiston Chitando.

The public is advised that Cabinet agreed to a policy change whereby all chrome ores will be traded through the Minerals Marketing Corporation of Zimbabwe (MMCZ). The MMCZ, through a Chrome Ores Coordination Committee, will set quarterly prices of chrome ore which miners and traders will trade at. The Committee will comprise representatives of Smelters and the Chrome Small-Scale Miners Association.

Cabinet also approved a number of special grant applications in the following categories:

Cabinet adopted the Third Quarter Performance Report of the National Development Strategy for 2022, as presented by the Minister of Finance and Economic Development, Honourable Professor Mthuli Ncube.

The nation will recall that Cabinet approved the NDS 1 Monitoring and Evaluation Framework in 2022, which requires quarterly reports of progress under the 14 Thematic Working Groups (Pillars) of the Strategy. Highlights of the progress are outlined below.

Under the Economic Growth and Stability Pillar, the economy remained stable, as reflected by the decline in month-on-month inflation from 30.7% in July 2022 to 3.5% in September 2022, reversing the runaway inflation trend which was experienced since the beginning of the year.

Annual inflation also declined between August and September 2022, reflecting the effectiveness of the monetary and fiscal measures instituted to stabilize the economy. In the Food and Nutrition Security Pillar, the proportion of food secure people in the third quarter was 70%, according to the Zimbabwe Vulnerability Assessment Committee (Zim VAC) Report.

The rest is supported by Government and development partners.  The review period indicates a positive progression towards meeting food and nutrition security targets, with maize output at 1.6 million metric tonnes.

Under the Moving the Economy Up the Value Chain and Structural Transformation Pillar, the third quarter manufacturing capacity utilisation stood at 66% surpassing the target of 62% by 4 percentage points. Under the Infrastructure and Utilities Pillar, the Hwange Power Station Units 7and 8 are 97.2% complete, while the Second Phase of the Emergency Road Rehabilitation Programme (ERRP 2) continues to register significant progress. The rest of the Pillars for which progress is outlined in the quarterly report are as follows:

Cabinet considered and adopted the Principles of the Research Amendment Bill, as presented by the Vice President and Minister of Health and Child Care, Honourable Dr. C.G.D.N. Chiwenga.

The Bill amends the Research Act [Chapter 10:22] and aligns it to the Constitution, to the Public Entities and Corporate Governance Act as well as to the imperatives of modernizing and industrializing the country. It further provides for the establishment of a Research Fund and strengthens the Secretariat of the Research Council of Zimbabwe to meet the demands of a knowledge-based economy.

Cabinet wishes to highlight that the Bill will require members of the Council to be subjected to performance contracts and evaluations and declaration of assets and conflicts of interest. The purpose of the Fund alluded to above is to, among others, support and promote the creation of new knowledge, research and innovation. To motivate private players, Treasury may be requested to consider incentives such as tax rebates for funds allocated for research purposes.

The amendments will enhance and promote research in the country for innovation and industrialisation, which are the drivers for the realization of Vision 2030 and beyond.

Cabinet received the Report on the High-Level Commonwealth Assessment Mission to Zimbabwe, held from 12 to 18 November 2022, as presented by the Minister of Foreign Affairs and International Trade, Honourable Dr F.M. Shava.

The High Level Mission was led by the Commonwealth Assistant Secretary General, Professor Luis Francesci, and its objective was to conduct an on-site evaluation of the progress made by Government in implementing legislative, political, electoral and economic reforms, and the country’s readiness to re-join the Commonwealth. The Mission held a joint meeting with the Ministers of Foreign Affairs and International Trade; Justice, Legal and Parliamentary Affairs; Finance and Economic Development; Home Affairs and Cultural Heritage; Public Service, Labour and Social Welfare; and Information, Publicity and Broadcasting Services. The Mission also met other stakeholders including the Zimbabwe Electoral Commission, Faith-Based Organisations, Civil Society Organisations; the Academia, members of the Diplomatic Corps, Media Practitioners, and persons of interest to the Mission. The Mission also paid a courtesy call on His Excellency the President, Cde Dr E. D. Mnangangwa.

Cabinet advises that the Secretary-General of the Commonwealth is likely to circulate the Assessment Mission Report to Member States for consideration in January 2023. Subsequently, Commonwealth Member States will respond and determine the way forward.

Cabinet adopted the comprehensive Report on the 27th Session of the Conference of Parties (COP 27) to the United Nations Framework on Climate Change, which was held in Sharm El-Sheikh Egypt, from the 6th to the 18th of November 2022, as presented by the Minister of Environment, Climate, Tourism and Hospitality Industry, Honourable N.M. Ndlovu.

The Conference was preceded by a Summit of Heads of State and Government which was attended by His Excellency the President as reported at the 33rd Post-Cabinet Press Briefing. Key outcomes of the  Conference of Parties include the following:

While the COP 27 was dubbed the “Implementation COP”, it was apparent that developed countries want to abdicate their responsibility of financing efforts to address climate change. However, the establishment of the Loss and Damage Fund will go a long way in providing relief funding to Governments which are spending a lot of money responding to disaster caused by climate change.

Cabinet received the Report on the 19th CITES Conference held in Panama City from 14 to 25 November 2022, as presented by the Minister of Environment, Climate, Tourism and Hospitality Industry, Honourable N.M. Ndlovu.

Cabinet wishes to highlight that Zimbabwe made four proposals at the CITES Conference. These were as follows:

Other member states made a total of six submissions to CITES in the following areas:

Given the divisions that continue to widen among African regions at CITES, Cabinet agreed that the matter be taken up through engagements with fellow African nations and, where possible discussed at the AU Council of Ministers Meeting so that Africa comes up with a common position devoid of the influence of the former colonial masters and civil society organisations.

Cabinet considered and approved Reports by Ministers under the 3rd 100-Day Cycle of 2022.

I have invited the Secretary for Energy and Power Development to give an update on the country’s power supply situation at the end of my presentation.

(b)  The Minister of Foreign Affairs and International Trade reported that works are at various stages of completion at the following projects:

(c)   The Minister of National Housing and Social Amenities reported progress on Projects under his purview as follows:

I now call upon the Secretary for Energy and Power Development, Eng. Gloria Magombo, to give an update on the country’s power supply situation.

By AMH Voices 16h ago
Zim now a failed State