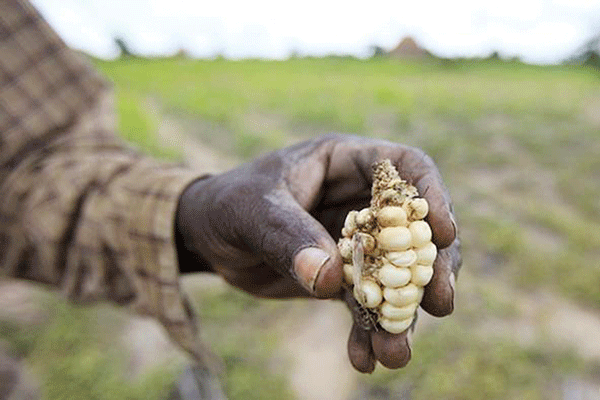 BY MIRIAM MANGWAYA ZIMBABWE has been listed among 20 countries deemed to have hunger hotpots following drought-induced poor harvests in the 2021-2022 farming season.

“Sri Lanka, West African coastal countries, Ukraine and Zimbabwe have been added to the list of countries with hunger hotspots, where food insecurity is expected to worsen over the next six months,” WFP said in a statement.

“Zimbabwe is a new country with hunger hotspots. Rainfall deficits throughout the season have cut the 2022 cereal production below average and have caused permanent crop wilting in four provinces. Persistently high inflation rates, low availability of maize, a staple food, and the continuation of the war in Ukraine could further exacerbate the food shortages and increase food prices as 2,9 million people were already food insecure  in the first months of 2002.”

Government has, however, said it had enough grain to supplement food deficits because it was expecting a grain surplus of over 100 000 tonnes. However, reports indicate that the Grain Millers’ Association of Zimbabwe has entered into an agreement with Malawi’s government run-Agricultural Development and Marketing Corporation to purchase 100 000 metric tonnes of maize.

In its latest report on the country’s food security outlook for June 2022 to January 2023, the Zimbabwe Vulnerability Assessment Committee (ZimVac) said for most households, they would likely remain food constrained.

“In the post-harvest period, food security outcomes are expected to improve to minimal or stressed.  However, humanitarian food needs will continue to increase steadily through January 2023 and will be higher than needs at the peak of the 2021/22 lean season. Food crop sales will be non-existent in deficit-producing areas, while sales will be marginal in surplus-producing areas. Casual labour opportunities and livestock sales will be below normal due to limited demand. Cross-border trade is increasing with the recent opening of land borders, although it will likely remain below pre-pandemic levels,” the ZimVac report reads.

ZimVac said high international prices and the continued depreciation of the local currency were contributing to low household purchasing power thereby increasing the number of households experiencing challenges in meeting their basic food and non-food needs.