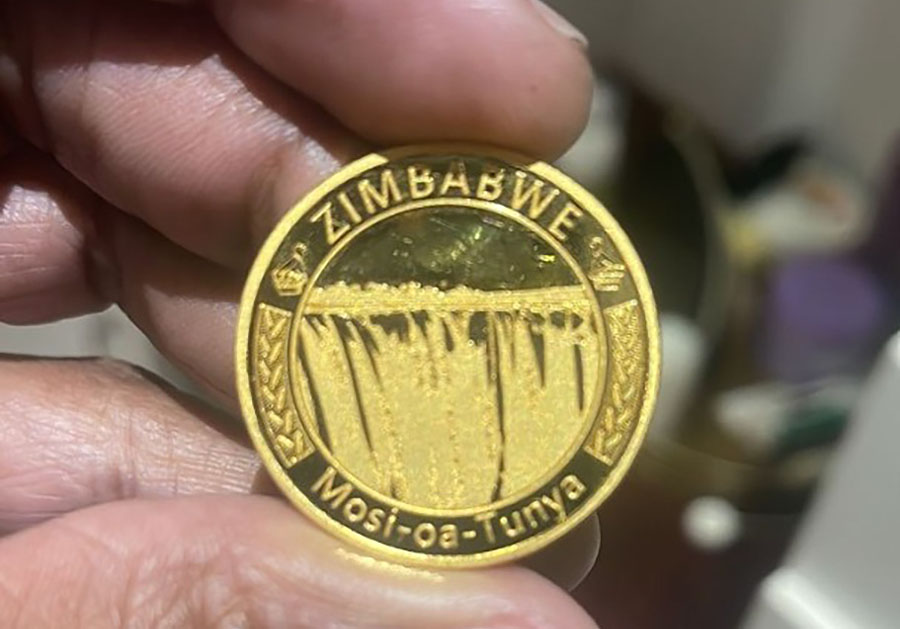 The Reserve Bank of Zimbabwe (RBZ) last month introduced gold coins, known as Mosi-oa-Tunya, onto the market as a store of value.

BY MTHANDAZO NYONI LOCAL research firm Morgan & Co has revealed that the gold coin, introduced in the market last month, has triggered a massive sell-off on the Zimbabwe Stock Exchange (ZSE) as institutional investors switch to an alternative asset-class with a prescribed asset status.

The Reserve Bank of Zimbabwe (RBZ) last month introduced gold coins, known as Mosi-oa-Tunya, onto the market as a store of value.

Other characteristics of the coin include liquid and prescribed asset status.

The gold coin, weighing one troy ounce or 31,1 grammes, with purity of 22 carats, is available for sale in both local and foreign currencies at a price based on the prevailing international price of gold and the cost of production.

According to the central bank, 1 500 gold coins were sold to the market by its agents during the first week of their release, signalling a strong demand for the yellow metal.

A total of 85% of the sales were in local currency, while the balance of 15% was bought in foreign currency.

“Inflationary pressures and the instability of the local currency unit clearly cements the investment case in the Mosi-oa-Tunya gold coins. In addition, there has been a lot of interest in the coins, particularly from a Zimbabwe dollar position, given that it has prescribed asset status,” Morgan & Co said in its latest report titled Economics and Equity Strategy Note: The Zimbabwe Syndrome.

“According to the Ministry of Finance and Economic Development, the persistent low level of compliance with the prescribed asset threshold by the insurance and pension industry remains a cause of concern.

“Going forward, the industry will need to invest in bankable projects that can be accorded prescribed asset status or subscribe to government paper to comply with the law,” the local research firm said.

“The gold coin has, therefore, triggered a massive sell-off on the Zimbabwe Stock Exchange as institutional investors are switching to an alternative asset-class. As a result, the stock market has largely de-rated on weak demand because of tight liquidity in the market.”

Morgan & Co noted that the first half of 2022 was the worst in terms of global equities’ performance the world over, with major indices across global exchanges in free-fall.

It said the tough operating environment, largely as a result of the ongoing Russia-Ukraine war, was characterised by rising interest rates, surging inflation rates and commodity shortages.

The research firm said the local bourse had borne the brunt of these global events coupled with the deepening economic crisis locally.

A deteriorating local currency and tight liquidity, it revealed, have resulted in the bourse’s market cap falling in real terms from US$6,7 billion in January 2022 to US$2,6 billion (in June), using parallel market rates.

“Looking at the indices, the All-Share Index is up 48,75% year-to-date (below inflation). Trading has been underpinned by high volume trades in bluechip counters such as Delta, Econet, Meikles and Simbisa,” it said.

While the new measures have triggered a liquidity crunch on the ZSE, the research firm said one fundamental observation was that stock prices had declined significantly in real terms and the market was looking “cheap”.

“This analysis confirms our view that ZSE stocks are undervalued and there is scope of re-rating,” it revealed.

Morgan & Co said the recent sell-off on the ZSE had resulted in apparent under-valuation of traditional blue chips like Delta, Econet, Innscor, Hippo and Meikles, while there have been no fundamental changes to business models.

By Staff Reporter 23m ago
Comoil on recovery path: MD