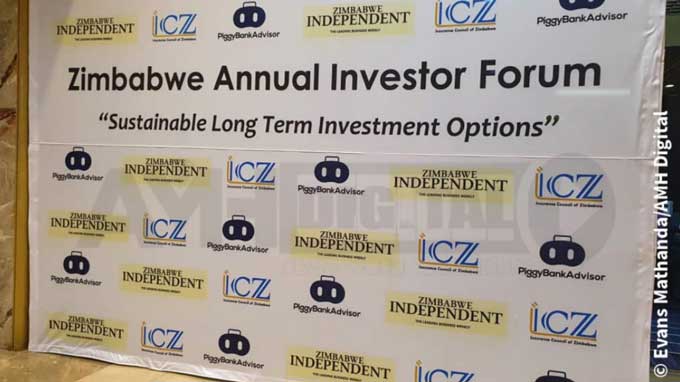 “We are determined to make the ‘Zimbabwe is open for business’ campaign a reality through important gatherings like these, and through constructive criticism, thus pointing out weaknesses in our policy direction through our frank and unbiased coverage of the performance of the national economy,” Mdzungairi said.

BY TAFADZWA KACHIKO Alpha Media Holdings (AMH) has pledged to provide a platform where government, business and other stakeholders can meet and drive conversations necessary for the country’s economic growth.

The statement was made by AMH editor-in-chief Wisdom Mdzungairi at the inaugural Zimbabwe Annual Investor Forum hosted by AMH’s Zimbabwe Independent newspaper in partnership with PiggyBankAdvisor in Harare on Wednesday.

The event, held under the theme Sustainable Long-Term Investment Opportunities, was graced by President Emmerson Mnangangwa who gave a keynote address.

#WATCH 🟤We bring you #LIVE updates from the inaugural #Zimbabwe Annual Investor Forum where HE @edmnangagwa is expected to address ▶️Sustainable Long-term Investment Opportunities #ZimInvestment2022#MediaNDS1@MypiggybankC pic.twitter.com/TlvQWcyMnH

“We are determined to make the ‘Zimbabwe is open for business’ campaign a reality through important gatherings like these, and through constructive criticism, thus pointing out weaknesses in our policy direction through our frank and unbiased coverage of the performance of the national economy,” Mdzungairi said.

“Hence, this forum is one such event to bring media, government and industry together to critically discuss the economic question. This investor forum is set to be a key part of our events calendar as we endeavour to play our part in the development of Zimbabwe’s economy.

“We are extremely honoured and indebted to see that the President has acknowledged the importance of the trajectory that we are taking.

“This is no small thing for us, Your Excellency and we are happy to share with you that working together as one force, Zimbabwe can be turned into the heartbeat of this region’s economic development.

“With several other important products such as the Banks and Banking Survey, which has been an important feature of the Zimbabwe Independent calendar for 22 years, we are convinced that the country’s biggest business title will help the Second Republic chart a positive trajectory.”

Mdzungairi, however, called on authorities to take measures to stabilise the local currency and stop runaway inflation.

“But still more needs to be done especially the need to cool off currency jitters remains imperative, so is the need to stabilise our currency and provide foreign currency to businesses driving this economy,” he said.

“Prices have risen beyond many of our citizens’ reach, and we feel that this must be a matter of priority.”

“Despite the headwinds stemming from the COVID–19 pandemic and disruptions to operations that have been brought by such factors and instabilities in eastern Europe, the future appears to be bright. But we need to work together to achieve our goals as a nation,” she said.

“In that regard, the media plays a complementary role in spurring the national development agenda as espoused by the government while discharging its oversight role as the 4th Estate.

“We remain committed to promoting initiatives meant to improve the people’s livelihoods.  I have no doubt in the ability to overcome, having seen the resilience of the past decade, but it is not good for us to continue navigating in defence mode. Zimbabwe must return to the growth path.”

AMH group chief executive Kenias Mafukidze said there was need for State-owned enterprises (SoEs)reform to ensure they do not become a drain to the fiscus.

"We need to invest into our infrastructure to build our country' – AMH CEO @keniasmafukidze ▶️Sustainable Long-term Investment Opportunities #ZimInvestment2022#MediaNDS1 pic.twitter.com/Zjct7k2ylp

“Currently, Zimbabwe has the worst performing exchange in Africa. We must change that together. We must create sustainable long-term investment opportunities. This goal requires that we take a serious and critical look at our SoEs,” he said.

“Your Excellency, please can we reform our SoEs more aggressively to flip them from being a drain to being a contributor. The need for robust infrastructure cannot be over-emphasized.

“Over the last few decades, as a country we have underinvested in this area. Our roads are in disrepair, our health facilities are in disarray.”