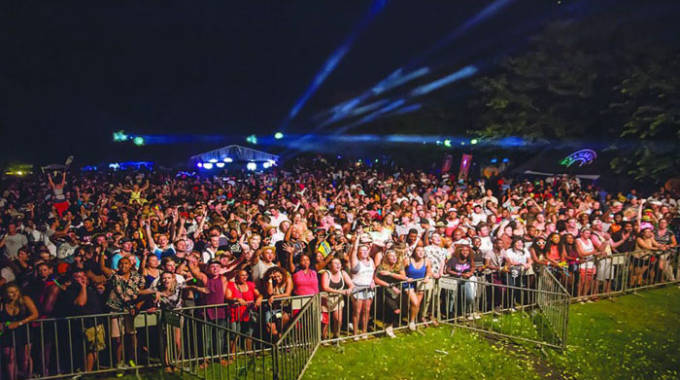 DJ Maphorisa, Kabza De Small and Sha Sha were supposed to kick off their carnival performances with a one-hour long act at the Pure Africa Sunset Cruise private show before later taking their acts to the main stage the same night.

BY WINSTONE ANTONIO IN VICTORIA FALLS

ORGANISERS of the ongoing Victoria Falls Carnival were left with an egg at the face after South African headlining acts were in no show when the three-day jamboree roared to life on Friday night at Elephant Hills Hotel.

The trio of DJ Maphorisa, Kabza De Small and Sha Sha could not be seen any closer to the stage despite having been fully paid, at least according to the event organisers.

DJ Maphorisa, Kabza De Small and Sha Sha were supposed to kick off their carnival performances with a one-hour long act at the Pure Africa Sunset Cruise private show before later taking their acts to the main stage the same night.

Sadly, the guests who had paid to witness the trio in action were left disappointed and robbed.

A source in the organisers team who preferred to remain anonymous told NewsDay Life & Style that there has been a communication blockade between the artistes and carnival organisers.

“All the three artsites were fully paid their charges and contractually bound to perform at the carnival, but surprisingly they failed to turn up. There was no communication to the carnival organisers by the artistes,” said the source.

“Maybe there will be forced to reschedule their performances depending with the decision to be made by the carnival director Darryn Lee and his team.”

Despite DJ Maphorisa, Kabza De Small and Sha Sha’s no show, artsites who performed on the night managed to electrify the carnival atmosphere.

Bulawayo music group Ngoma Ingoma was honoured to perform as the opening acts at this year’s edition of the fete.

Knowing what it means to be given such an opportunity, the band treasured the gesture and did not disappoint as they ushered revellers into a partying mood.

They went on to put up an electrifying performance in front of an appreciating crowd that kept on growing in the midst of their performance.

In did, they proved they were not a spend force.

The wheel spinner proved to be a favourite with many ladies through his seductive dances that received wild screams. He nailed it.

DJ La Timmy then left the stage for compatriots, the Khoisan band who made sure the partying mood continued to another level without disruption.

They were just a marvel to watch as they managed to keep the vibe before they left the mic for popular South African musician and record producer Master KG.

Famed for his Jerusalema hit, Master K G was the master on the stage. He connected well with the multiracial audience who sing and dance along.

The main highlight of his performance was when he was joined by Zanda Zakuza much to the delight of the crowd. They rocked belting out hits after hits.

Finally, the sound had to fade as Colastraw from Botswana closed the show.

Fireworks cannot be ruled out tonight with a sensational line-up of artistes who all have a record of putting up topnotch performances.

After a sunset cruise on the Zambezi Explorer boat, the VIP and VVIP guests will have a night to remember when local dancehall singer Nuty O and Afro-pop and soul singer Gemma Griffiths share the stage at a private show scheduled for 1830hrs at Pure African stage.

While Nuty O and Griffiths perform at the Pure Africa stage, compatriots hip-hop singer Takura, King Her, Tashinga and Djembe Monks will be sharing the stage with South Africa’s Nitfreak, Boity and DJ Kabelo and Nizhe Desoul at the carnival’s main arena.

The night will also boast a high-energy line up of some of Africa’s biggest artistes who are sure to keep fans on their feet through the night.

The curtain is expected to come down with a bang late on Sunday evening as the country’s finest artistes: Rapper Asaph, Flying Bantu, Griffiths, Nuty O and Shimza take fans into Workers’ Day.