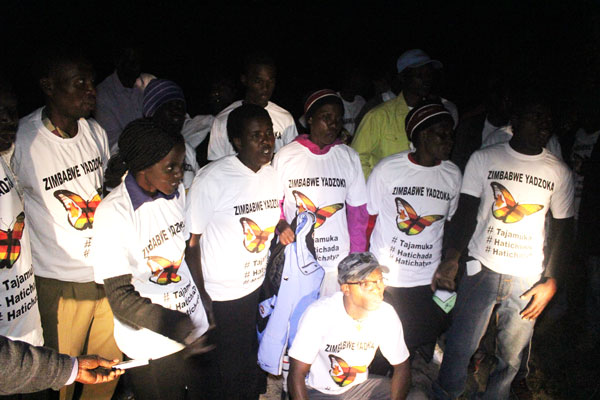 FIFTY machete-wielding gold panners on Tuesday invaded a Gokwe North police base intending to free their arrested colleagues, leading to a bloody confrontation with the law enforcement agents.

FIFTY machete-wielding gold panners on Tuesday invaded a Gokwe North police base intending to free their arrested colleagues, leading to a bloody confrontation with the law enforcement agents.

The brazen invasion came after police had arrested their nine colleagues on charges of robbing 80kg of gold ore from a local miner the previous day.

The gang had hired two kombis in Kadoma to take them to Zenda, almost 300km away, where their colleagues had been detained, waiting to be transferred to Gokwe North’s Nembudziya Police Station.

This comes as police have launched a national crackdown on machete gangs, accused of wreaking havoc in many parts of the country and committing heinous crimes such as rape, robbery and murder.

According to a leaked internal police memo addressed to officer-in-charge Gokwe district and dated January 8, the heavily armed illegal panners, who arrived at the base aboard two hired kombis, were later subdued and arrested after their leaders were shot and injured when they charged towards the police, threatening to overrun the station.

The injured were admitted at Nembudziya and Gweru General hospitals under police guard, while their hired kombis were impounded together with a Toyota Wish used by their colleagues.

All the accused are expected to appear at the Gokwe Magistrates Court today.

“I can confirm that we have arrested a gang of 14 illegal miners this afternoon (yesterday), who have been terrorising the province and they are set to go to Bindura for further investigations,” he said.

In a related matter, five machete-wielding gangsters wearing masks raided worshippers at a ZAOGA church in Mkoba suburb, in Gweru, in the early hours of Tuesday and got away with cash and cellphones in a movie style robbery.

The latest countrywide police raids came as the Parliamentary Portfolio Committee on Mines and Mining Development yesterday called for stiffer penalties to be imposed on machete gangs.

Speaking after an urgent meeting, committee chairperson Edmond Mukaratigwa said various stakeholders would be invited to get to the bottom of the problem.

“In particular, the committee considered the gold mining gangs commonly known as terrorists operating under the moniker MaShurugwi. They are a danger to the mining industry, taking into consideration the impact they have on the social, cultural and economic spheres of Zimbabwe,” he said.

“The committee further resolved that government kick-starts legislative procedures to allow for stiffer penalties with regard to such perpetrators as was done in the Criminal Procedure and Evidence Act regarding the vandalism of railway and electrical material, among others. The committee called for an urgent meeting against the background of the need to achieve sustainable mining business in the mining sector,” Mukaratigwa said

“The committee is highly concerned that these violent acts destroy alternative livelihoods of small-scale miners and their families, causing threat to the lives of children, women and people suffering from chronic illness. Zimbabwe is and has been a civilised republic, regulated by the laws enacted by our Parliament and, as such, unruly acts of violence spreading around our major resources can’t continue as they are retrogressive.”

Government has declared war on the machete gangs, who according to police reports, have killed over 100 people in gold wars.

Recently, a police officer, Constable Wonder Hokoyo, was bludgeoned to death, by the machete-wielding artisanal miners who had invaded Good Hope Mine in Kadoma’s Battlefields area.