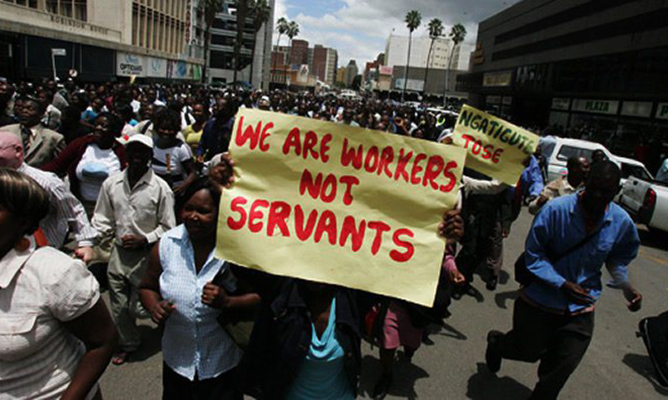 GOVERNMENT now faces a crippling civil service strike after its’ revised offer of $78 for the lowest paid worker or 20% on a sliding scale was rejected by negotiators, who want nothing less than $1 700.

GOVERNMENT now faces a crippling civil service strike after its’ revised offer of $78 for the lowest paid worker or 20% on a sliding scale was rejected by negotiators, who want nothing less than $1 700.

“They came first with a message that we have been given a non-negotiable cushion allowance by the President (Emmerson Mnangagwa). We would like to appreciate that gesture although it is little compared to the crisis we are in,” Alexander told journalists soon after yesterday’s National Joint Negotiating Council meeting in Harare yesterday.

“For the negotiated salary, they brought a revised offer of $300 million, which is still far less the challenges we are facing. It can’t restore the purchasing power of our salaries to levels of October 2018. So we strongly believe that as civil servants, we want something better than this.”

She added: “Our notice for a national strike still stands unless something meaningful comes up. So it is up to government to expedite the process.”

At first government had offered its workers a “paltry” 10% pay rise, but it was rejected, prompting the Apex Council to give a 14-day notice to strike.

Alexander said unions representing government workers would meet on Monday to map the way forward, with a likelihood that a strike was inevitable.

The stalemate will likely pile more pressure on Mnangagwa’s regime, which is already seeking to reduce its wage bill and battling a worsening economic meltdown.

David Dzatsunga, a member of the Apex Council team, said the offer was “too little” considering the state of affairs.

“This regime must be serious. We are now going back to consult the Apex Council and a way forward would be reached from there. But from the look of things, the civil servants are likely to go on strike,” Dzatsunga said. Progressive Teachers’ Union of Zimbabwe leader Takavafira Zhou said government was “not being serious with its workers and we want seriousness”.

“I can tell you that on Monday, the unions are going to reject this nonsense. At least, government should be realistic by looking at the percentages it has used to increase the price of fuel. From there, we can negotiate,” Zhou said Zimbabwe Teachers’ Association chief executive Sifiso Ndlovu said the offer would not cover the necessities required by the members.

“At the moment, one needs approximately $10 per day for transport, which translates to $200 per month. This is before we factor in lunch and other necessities. For your own information, the said offer would come into effect in April, so we are dealing with nothing; we want something meaningful,” Ndlovu said.