‘One VP for MDC govt’ 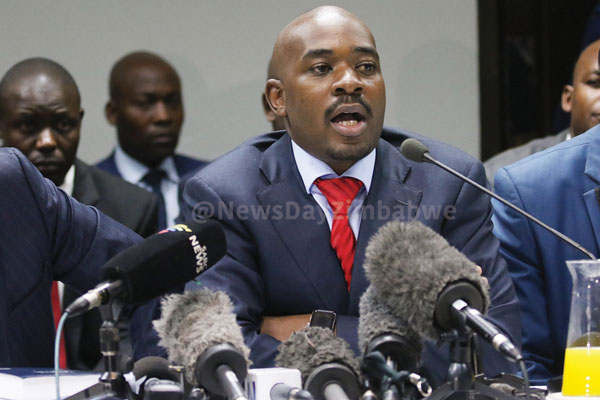 THE MDC will maintain three vice-presidents at party level, but will have one in government when it forms the government, its leader Nelson Chamisa has said.

THE MDC will maintain three vice-presidents at party level, but will have one in government when it forms the government, its leader Nelson Chamisa has said.

Chamisa said the party was only continuing with three vice-presidents who will all be elected at congress in Gweru this week, only because it was a legacy left by the late party president Morgan Tsvangirai.

“The issue of three vice-presidents is a legacy for our late president Mr Tsvangirai, with a trade union background. The party is different from government. The party can have as many leaders as possible, but in government, we will have a lean cabinet, with one vice-president on the basis of State resources,” he said.

The MDC has come under fire for having three vice-presidents, with some saying they could carry on with this culture into government if elected, but Chamisa said his deputies were not getting money from the party.

“I want you to know that none of the vice-presidents are paid any salaries by the party. It’s voluntary work. Even the president is not paid. Not that I want a salary because my salary is a victory, if we have a victory, then my salary would have come,” the MDC leader said.

Following hugely popular internal party debates by those contesting for positions ahead of the MDC fifth congress, Chamisa chided Zanu PF, saying power games in the ruling party were bloody and left others dead.

“In our party, we don’t cause accidents for our competition. We say let’s have an osmosis of ideas. We put in front those with better ideas and allow others to follow … light does not fight light unless there is darkness,” he said.

“All councils are struggling because of the state of central government. The river cannot flow when there are no rains. You can’t expect councils to provide adequate clean water when central government is failing to provide foreign currency for water treatment chemicals, when people have no jobs and can’t pay for service delivery,” Chamisa said.

“It is, therefore, important for the MDC to lead central government and restore dignity to the worker and the image of the country.”

Local authorities are owed millions of dollars in unpaid rates for services and water, leaving them struggling to fund basic service delivery.

Chamisa accused government of stealing from the poor under the guise of austerity and warned that increasing taxes would not revive the economy.

“You came and said austerity and I said, ‘look, you have just finished robbing the people of elections, now you are stealing from them using the 2% tax, they stole the US$ value and you just wake up and change currency, stripping off value’,” he said.