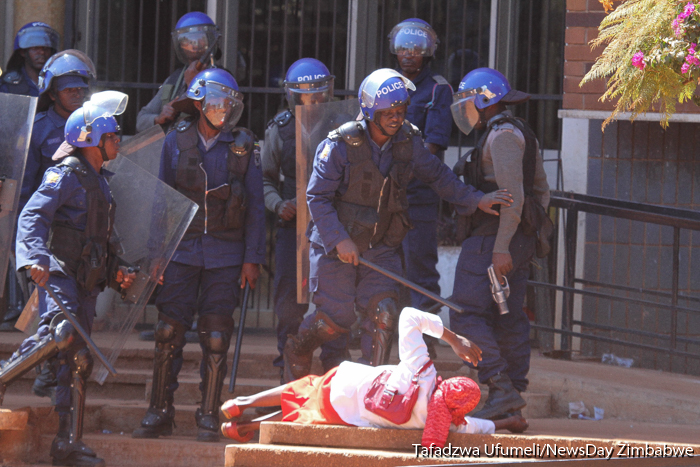 In 2018, following the fatal shooting of six protesters by soldiers on August 1, President Emmerson Mnangagwa appointed a commission chaired by former South African President Kgalema Motlanthe to carry out an inquiry into the matter.

ZPP said the anti-riot police’s response to this year’s January shutdown and recent August 16 protests reveal that the State still has a very long way to go before embracing progressive methods of policing.

Last month, armed police ruthlessly clamped down on protesters who had gathered in Harare for an MDC-organised protest march. The opposition party called off the march after failing to overturn a police ban of the demonstration at the High Court, but some of its supporters had already gathered in the city centre.

Concerns were raised after the police attacked people who had peacefully gathered and the resultant commotion only erupted as a result of the law enforcement agents’ heavy-handedness.

In its latest report, ZPP noted the blatant disregard of due process by law enforcement agents.

“ZPP recalls the recommendations by the Motlanthe Commission that ‘the police should be given the skills and capacity to deal with rioters. They should also be trained to be professional and non-partisan.’ Permanent secretary in the Ministry of Information, Publicity and Broadcasting Services (Ndavaningi) Nick Mangwana, highlighted that the police have been retrained in crowd control skills in order to avoid the loss of life and violent encounters such as that of August 1, 2018,” ZPP said.

“August 16 protesters were actually sitting on the ground and did not display any violent inclinations towards the police. Yet they were brutalised and severely beaten, something which flies in the face of government’s assertion that the police sector is being reformed,” the ZPP report read.

“Progressive and non-violent policing strategies could have been implemented to disperse people from the streets, such as water cannons, teargas and even arresting offenders. The violent encounters which were beamed all over the world have portrayed the second administration as no better than former President Robert Mugabe’s rule.”

The human rights watchdog said this is also apparent in the abductions, torture and assault of activists and those perceived to be critical of government.

“The Constitution has one of the most progressive Bill of Rights which provides for freedom of assembly and association (Section 58), demonstrate and petition (Section 59), freedom of expression and freedom of the media (Section 61) as well as political rights (Section 67),” ZPP noted.

“Therefore, citizens have the right to express their displeasure with current tough living conditions without the State deeming it a regime change agenda. Violence must never be the answer to quell dissent, but only progressive engagement through dialogue can yield desirable results.”

The watchdog said the State is reverting to the system of ruling through fear, adding that the show of might through marching soldiers in major cities certainly had the effect of intimidating people so that they do not protest.

“Despite recommendations by the Motlanthe Commission that ‘all those responsible for alleged crimes on the 1st August 2018 should be prosecuted’ ZPP notes that to date no one has been arrested and sanctioned for the killings,” ZPP said.

“Violence perpetuated by the State, accompanied by impunity is fast leading Zimbabwe into a toxic, militarised and intimidating environment that has all the signs and indicators of the eruption of violent conflict. If people are victimised for expressing their views, Zimbabwe is well on a slippery slope of being democratic on paper, but authoritarian in reality.”