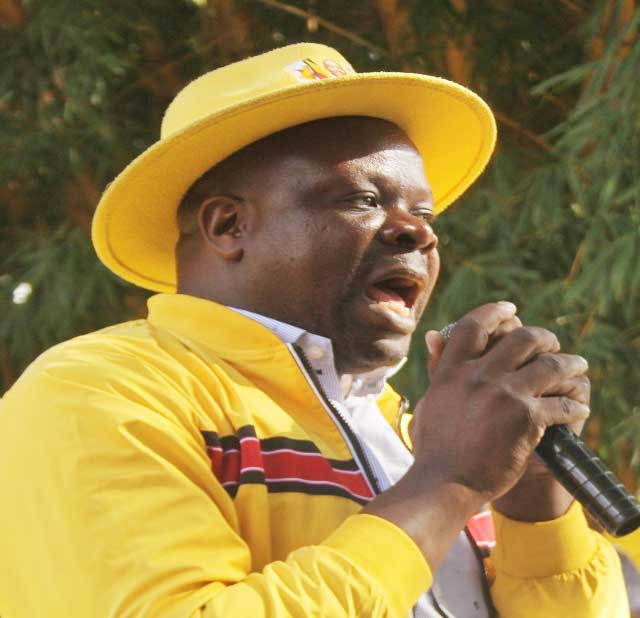 DEFENCE lawyers for Citizens Coalition for Change (CCC) Mkoba legislator Amos Chibaya and 24 other opposition activists who were arrested in Budiriro last weekend for allegedly disturbing public peace and chanting opposition party slogans have applied for bail stating that the party slogan did not incite violence and wearing yellow clothes was not a crime.

The 25 CCC activists are accused of chanting party slogan: “Ngaapinde Hake Mukomana (the young man must get into power).”

While applying for bail, their lawyer Chris Mhike said the CCC slogan was just the same as Zanu PF supporters chanting the slogan “ED Pfee”.  He said no one had been arrested for chanting the Zanu PF slogan.

“The Form 242 (charge sheet) said the accused were chanting the slogan, Ngaapinde hake mukomana, 2023, Chamisa Chete Chete (the chosen one), and to this, the first witness said it showed they were intending to cause public violence,” Mhike, who is instructed by the Zimbabwe Human Rights NGO Forum, said.

“There is no violence in the slogan and this is not in breach of any peace. It is not a bigoted statement. This is a political party statement. It is the same as ED Pfee, Pfee Pfee Pfee. No one has been arrested for chanting that slogan. The Form 242 itself, does not explain how the accused were colluding to breach the peace. The mention of slogans that the investigating officer could make sense of, surely could not be the basis of establishing that there was an agreement and common purpose of the accused for breaching the law.”

He said the charge sheet implied that wearing yellow clothes was a crime.

“Wearing yellow or associating it with CCC does not constitute a crime in Zimbabwe. It is a disgrace that we now live in a nation where police officers harass people for their political association,” he said.

Mhike said his clients were proper candidates for bail because the State had not established that they had the intention of causing violence.

“The intention applicable is that of breaching peace and that was also not established,” Mhike said.

He said the second witness, the deputy officer-in-charge for Budiriro police said the accused were not violent.

“The common purpose fallacy is not applicable for practical reasons. The first State witness told the court that some were arrested outside the residence and others outside. The second witness went on to say some were still sitting in their motor vehicles. This is not possible for people in different locations to form a common purpose. It is not logical. It is quite clear that some of the accused were arrested because they were walking outside the accused’s home.

“Others were arrested for wearing yellow T-shirts. It is not clear whether wearing a yellow T-shirt inscribed CCC or simply yellow means you are member of the CCC,” Mhike said.

He said his clients would not abscond because the offence was not serious.

“A serious crime is a scheduled offence such as murder, rape, terrorism, among others. Gathering for the purpose of violating peace is a not a schedule offence, even if the State deemed it a serious offence, this does not affect the granting of bail.  The accused do not intend to abscond to any other country, Zimbabwe is their home, and they are rooted here. They are convinced of their innocence. They are disappointed that they have spent a week in custody when they are innocent,” Mhike said.

He said none among them had violated bail conditions before, and personal circumstances of each shows that they are good candidates for bail.

The State, however, insisted that the accused were not proper candidates for bail, raising fears that they would abscond or interfere with police witnesses.

The 25 were arrested at CCC legislator Costa Machingauta’s residence in Budiriro while attending a meeting.