If you had to pick the top 10 players in the Premier League in terms of minutes played per goal scored, Brentford’s Yoane Wissa would probably be nowhere near your list.

While Wissa may have played fewer minutes and scored less than the rest, his presence among some prestigious company only reinforces Brentford’s canny transfer market prowess.

And how the forward is relishing the moment as the west London club, who would sit bottom of a top-flight spending power table, hover in 14th place, nine points above the relegation zone.

“It’s very fun to play in the Premier League because everyone’s going crazy on the pitch. We are happy to be here and hopefully we will stay.”

The substitute’s late strike – which enabled Brentford to chalk up a bigger win than Real Madrid’s at the Bridge this week – was his fifth league goal in a total of 858 Premier League minutes, so averaging a goal every 172 minutes.

Wissa’s minutes on the pitch are restricted by the presence of Ivan Toney, the club’s top scorer with 11 league goals, as Brentford battle in England’s top division for the first time in eight decades.

But with his five goals coming from eight shots on target, Wissa’s stats make for interesting reading. It is of course no secret that Brentford, whose approach is regularly compared to baseball’s ‘Moneyball’ story, are driven by data when it comes to recruitment.

Owner Matthew Benham graduated to owning the club after running a company supplying gambling companies with detailed statistics – a database Brentford has adapted to revitalise their fortunes.

The club bounced around England’s bottom two professional tiers for almost 60 years before Benham became majority shareholder a decade ago and began a transformation which included moving into a new 17,500-capacity stadium in 2020. 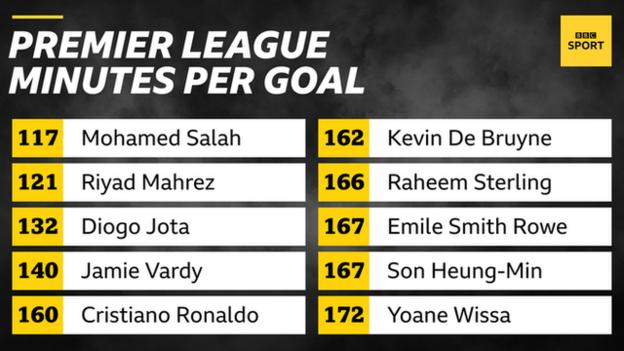 “If we’re looking at a striker, we’ll use our position-specific criteria to filter the process down,” Dykes explained.

“That comes down to about 1,300 players and then it’s my job to bring that down to the top few players. Then we start getting the coaches involved.”

So how did Brentford come to focus on Wissa – who had played just two top-flight games in France prior to appearing on the club’s radar?

Those were with Angers before Wissa joined second-tier Lorient in 2018, netting 15 goals in 28 games the next season to win promotion as champions. He followed that with 10 goals in Ligue 1 in 2020-21.

“Yoane scores goals, very simply,” said Dykes. “He gets into goalscoring situations, he’s quick, he’s sharp, he’s good on the ball so for the criteria of that position, it was tick, tick, tick, tick.”

Wissa has scored some key goals, an equaliser in September’s thrilling 3-3 draw with Liverpool, a stoppage-time winner away to West Ham a month later and the opener in January’s vital 2-1 victory over Aston Villa.

His memorable ‘Zen’ celebrations aside, the Congolese delighted in the aftermath of Brentford’s last home game – when the crucial 2-1 win over relegation rivals Burnley was followed by celebratory Wissa dance moves.

“I need to feel the heart of the fans,” he said. “I know they love me but I need to show them how I love them as well.

“It was a very good win against Burnley and they didn’t stop shouting and singing, so I think it’s the start to a good story with them and I will make sure to give back what they give me.”

While Fosu and Jeanvier have barely figured owing largely to injuries, Nigeria international Onyeka is impressing with his boundless energy.

The club’s first signing after promotion, he joined after featuring in the Champions League, where he played against Liverpool, Ajax and Atalanta, with FC Midtjylland, a Danish club also owned by Benham.

“It’s been a really massive step but so far so good,” 24-year-old Onyeka said.

“I’ve learned the need to keep up with the pace and technically. Every time I’m on the pitch, I want to give everything for the team. I hate losing.”

“Frank is your typical box-to-box player,” says Dykes. “In the Premier League, you have to have pace, power, athleticism and energy.”

“We were convinced Frank could come straight into the Premier League – we knew he’d be a crowd favourite as well because he encompasses a lot of what Brentford fans want to watch.”

As Dykes freely admits, Brentford’s modest wealth means the club has to do things differently to keep up with the big boys, which they primarily achieve by offering players a perfect platform for future success.

“We’re never looking for the complete player, we’re looking for a player we can develop and potentially sell in the future for profit,” says Dykes.

Both Onyeka and Wissa fitted the mould, but Dykes is keen to stress that while both may be African they were not selected because of where they come from but because they were deemed ‘high-performing’ players.

Yet there was one final hurdle for both to jump before joining Brentford, whose values and priorities may differ from some of their rivals.

“If you ask our coach, director of football and owner, they’ll all say the same thing – we don’t want any bad characters that are not going to buy into what Brentford are, which is a very community-based family-based football club.

“We make sure they are good people. Frank and Yoane are top blokes, with good family mechanisms in place and good morals.”

Oh, and they can play a bit of football too. -BBC