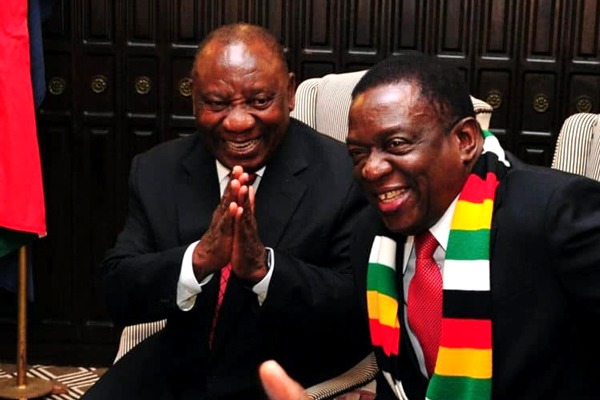 Since the beginning of the lockdown, some four weeks ago, President Emmerson Mnangagwa has been accused, jokingly, of copying his South African counterpart, Cyril Ramaphosa.

Since the beginning of the lockdown, some four weeks ago, President Emmerson Mnangagwa has been accused, jokingly, of copying his South African counterpart, Cyril Ramaphosa.

Three days after South Africa began its lockdown, Zimbabwe began its own; the neighbouring country extended its restrictions three weeks later for 14 days and Zimbabwe, true to form, followed suit.

Social media soon came up with a name, “Ramakopa”, a play on the name Ramaphosa and copying to describe Mnangagwa.

While many see the funny side of this, Zimbabwean authorities are far from being amused, as a Chipinge man has found out.

The man has been charged with undermining the authority or insulting the President after he said Mnangagwa was not doing nearly as well as Ramaphosa in mitigating the effects of the lockdown.

“In Chipinge, authorities charge a man with undermining authority of or insulting President Mnangagwa after he allegedly circulated a message on WhatsApp in which the Zanu PF leader was accused of ineptitude for not implementing a rescue package as announced by SA leader Ramaphosa,” the Zimbabwe lawyers for Human Rights tweeted on Saturday.

Masvingo Mirror reported that the man, Chrispen Rambu, was an MDC councillor.

The outlet said Ruma allegedly said Mnangagwa had not covered himself in glory compared to Ramaphosa,

“Seeing him addressing and comparing him with ED, you won’t doubt that we are having a fool for a head of state.”

While Mnangagwa and his administration generally claim they promote freedom of the press, a growing number of people have been arrested on allegations of insulting or undermining the authority of the president.

When insult laws were first challenged in court, Mnangagwa as the Justice minister defended those regulations, claiming they were justified in a democracy and now his administration is using those laws to prosecute perceived critics.