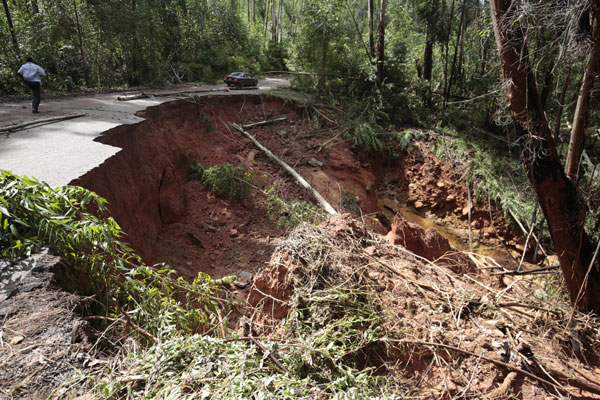 Nearly a month on, the flood waters have receded. But in some ways, these countries’ problems are just beginning. That’s because floods always increase the risk of major health problems in affected populations during the weeks and months that follow the actual event.

Infection is just one concern. Others include waterborne diseases like cholera. Cases also like non-communicable diseases such as mental health issues triggered by trauma have been commonplace. Mosquito populations have also exploded, and with them the risk of malaria: Receding flood waters provide more breeding spaces for the insects.

The countries’ governments and international aid agencies are coordinating relief efforts. It’s important that these don’t just focus on the short-term effects of Idai and the floods — it’s crucial to look ahead and try to guard against major health crises.

Immediate consequences of any flooding event include drowning, physical injuries, hypothermia and electrocution. By the second week of April, more than 600 people were reported dead in Mozambique alone. By the first week of April, 344 deaths were reported in Zimbabwe and nearly 60 in Malawi. Many others were also still unaccounted for. In the first 10 days after an event like Idai, there are several health issues to look out for. These include skin infections and respiratory infections like pneumonia.

There isn’t enough safe-drinking water; sewerage systems overflow and contaminate drinking supply and people’s hygiene and sanitation suffer in the aftermath of any natural disaster. This increases the risk of diseases that target the intestines, like gastroenteritis and cholera. Cholera had already been reported in central Mozambique before Idai. It will only get worse: By April 8, more than 3 500 cases and three deaths had been reported.

Many people have sought shelter in overcrowded spaces. They have no choice, as their homes were destroyed by Idai. But overcrowding brings its own issues, such as an increased risk of infections like hepatitis A and typhoid being spread.

Waterborne diseases like malaria and dengue are always present in Beira and its surroundings. But more cases are likely to occur after flooding because of the increased numbers of mosquitoes – and they’re tough to control in these circumstances. Spraying homes isn’t possible — homes have been badly damaged or almost entirely destroyed.

It will be important to hand out bed nets that have been treated with insecticide; people can carry these with them as they go, and at least protect themselves from mosquitoes while they sleep. This is already happening in Mozambique as part of relief efforts.

Not all the health risks that follow a natural disaster are physical. Mental health disorders — especially post traumatic stress disorders — are common in the aftermath of flooding and massive displacement. Many people have lost loved ones or suffered injuries in traumatic circumstances

Another problem that these countries will have to tackle is the interruption of health services for communicable and non-communicable diseases – tuberculosis, HIV, diabetes, hypertension, and obstetric conditions.

Mozambique has a high HIV prevalence: About 2,1 million people are living with HIV infection, and about 54% of them are estimated to be receiving anti-retroviral therapy. Given the damage to clinics and the fact that roads have been washed away, it will be difficult or even impossible for these people to receive their ARVs. This can have health consequences long after the flood damage is cleaned up.

There are huge relief efforts underway.

The Mozambican Ministry of Health is coordinating flood relief efforts with the support of the World Health Organisation and many other partners, agencies and non-governmental organisations.

Emergency co-ordination centres have been established in Maputo and Beira. These are focused on people’s immediate needs: Rescue operations, the provision of safe drinking water, emergency shelters, food, restoration of communication channels and transport networks.

The United Nations’ water, sanitation and hygiene programme is providing safe water, installing latrines, co-ordinating waste management and educating people about the necessity of hygiene, despite the tough circumstances.

A key focus has been the establishment of a cholera response plan. Cholera treatment centres equipped with rehydration fluids have been set up. Healthcare workers are being trained to manage cholera. A vaccination campaign has been initiated using oral cholera vaccine. The vaccine has been successfully used to prevent and control cholera outbreaks in other post-disaster settings.

Approximately 900 000 doses of the oral cholera vaccine were flown into Beira from the World Health Organisation’s global strategic supply. Teams have started vaccinating vulnerable people in Beira, and are planning outreach to other areas. More than 800 000 people in four districts affected by the cyclone have received the cholera vaccine. A measles and polio vaccination campaign is also being planned.

Specialised diagnostic testing is being provided by the Public Health Institute of Mozambique to identify and confirm cases of epidemic-prone diseases such as cholera and measles.

All these efforts are necessary and welcome. But it will also be crucial to look beyond the initial disaster response to ensure the countries that have been shattered by Cyclone Idai rebuild their infrastructure and develop response plans to deal with future cyclone damages.