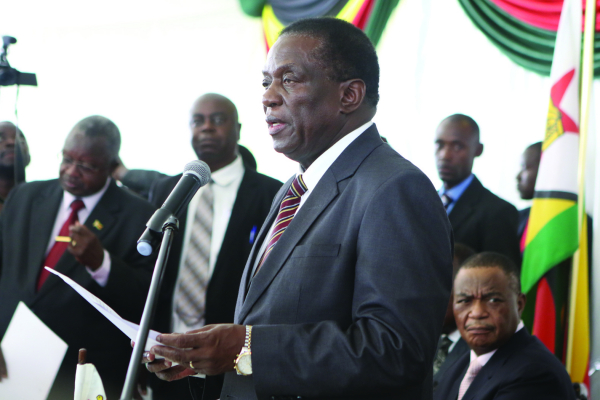 PRESIDENT Emmerson Mnangagwa on Saturday hinted on plans to reintroduce the Zimbabwe dollar to curb the current cash shortages.

PRESIDENT Emmerson Mnangagwa on Saturday hinted on plans to reintroduce the Zimbabwe dollar to curb the current cash shortages.

Addressing a Zanu PF campaign rally in Bulawayo, Mnangagwa said the grinding cash crisis could only be resolved by introducing a domestic currency.

“Next issue is the question of cash availability in our banks. Our Zimbabwe dollar collapsed in 2008 and 2009. We then adopted a basket of currencies − the South African rand, the United States dollar, the British pound, the Euro and so on,” Mnangagwa said.

“Initially, the US dollar and the rand accounted for 40% each and the other 20% was the balance of other currencies. As time went on, the US dollar became dominant.

The US dollar today takes about 90% of our transactional activity in the economy. We have no control over the US dollar, it is time that we must adopt our way of restoring the dignity of our country by creating our own currency,” he added.

The Zimbabwe dollar was dumped in 2009 after years of hyper-inflation, paving way for the multi-currency system supported by the country’s own surrogate currency – bond note − which has also become scarce on the market.

The reintroduction of the Zimbabwe dollar has remained an emotive issue among citizens who experienced the hyperinflationary environment that peaked in 2008 when the largest – and only usable – banknote was Z$10 trillion.

Bond notes were introduced in November 2016 to ease an acute cash shortage and are backed by a $200 million African Export Import Bank facility.

The surrogate currency has, however, failed to address the bank note shortage.