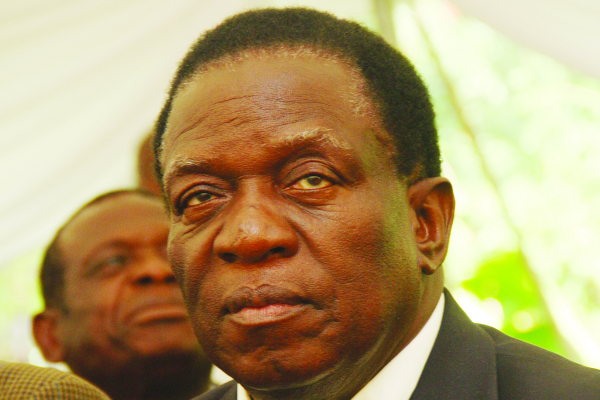 We are available for advisory and also policy matters. The President must select carefully his team before making critical decisions. From the time President Emmerson Mnangagwa appointed his Cabinet, there was a lot of talk on the ground and barely 24 hours after the appointments were done people were expecting some significant improvement on the part of the economy not knowing that growing an economy is a gradual process.

There is need for Mnangagwa to bring everyone on board, civic society, students, civil servants, war veterans, political parties and economic and policy advisers, business community and then begin to work as a team so that our country begins a reconciliation and healing process.

That is where the issue of economic revival begins; it is not how or what or why you do it, but it is about applying issues of principalities. Zimbabwe has the potential to grow its economy by 8,75% per annum if balances and checks are done properly.

Zimbabwe is known to be one of the countries with so many documents at hand, but on the part of implementation we have nothing to show. It is high time we should move away from mob psychology where people clap hands for us on stage, but nothing to show at hand.

In fact, there was a lot of discord in the government. There is need to be specific and come up with quality information which is very simple to investors. What investors want is clear and straightforward information regarding policy matters. You don’t need to have too many documents at hand, ZimAsset, what what blah blah blah. There is need for simple documents which have clear resolutions.

Foreign policy must be clear, attractive and be investor friendly and it must be able to lure a lot of foreign direct investment into the country. In the previous government we saw Saviour Kasukuwere and Justice Mayor Wadyajena clashing in Parliament on policy matters and this showed that indeed the government was out of touch with reality. It is very important that the President addresses this one as a matter of urgency.

Most investors are afraid to invest in Zimbabwe because of protection of their properties. For example, farms were grabbed without compensation and most farmers were ditched by dubious characters who pretended to be investors. We have Aliko Dangotte, who invested in more than 22 countries except Zimbabwe in the Southern African Development Community region and he did that deliberately because of that.

People like Kasukuwere grabbed farms, safari lodges and other businesses entities without even compensation and it is important that our laws should be very clear on the issue of property rights so that we attract a lot of foreign direct investment.

This idea of having mafia-type of people in the government who go around grabbing people’s assets will put a dent on our country and this will bring a lot of misery on the people of Zimbabwe. These G40 thugs grabbed assets from various people and most companies they grabbed were run down, as not even a single company is delivering.

It is important that ED has started on a good note and it is important that he addresses the issue of human rights. For example, we are hearing that soldiers are abusing people in public and solicitation for bribes and other shady deals. This issue has been raised by human rights and other civic society bodies as a matter of concern. Hopefully the matter will be resolved soon. For example, we have some MDC-T activists languishing in prison, we have some people from the private media being harassed and also the issue of vendors and the city council is worrisome and can dent the name of our country. It is high time Mnangagwa and company should begin to walk the talk.

Previously, people used to disappear without any trace, the likes of Itai Dzamara and others, but it should be a thing of the past and Mnangagwa should begin to walk the talk. What investors want is to make sure the human rights issue is well addressed. We must not have a polarised environment which should be free from toxic politics.

If you look at the budget it was good but it didn’t tell us exactly what they were going to do to address leakages that have already been created by the previous government. For example, they are people who got loans from banks who never repaid them, the Reserve Bank of Zimbabwe debt is not yet cleared and it was put to the government expenditure, and also the issue of the Security ministry that is in charge of the Central Intelligence Organisation (CIO). What do we need those many CIO operatives for when we can’t even afford to pay civil servants bonus on time? This issue was supposed to be addressed once and for all.

We also have too many civil servants. For example, we have ghost workers amounting to 230 000 people in the bloated government, but Finance minister Patrick Chinamasa only reportedly told us that ghost workers were only 3 700, which is not good. He should have told us the truth that we have so many ghost workers and we are going to clear them.

For us to attract foreign direct investment, we must walk the talk and the outside world is watching to see if there are any changes before they can commit themselves.

The government needs to come out clear and clean about how much it owes who, where and why. There is also need for clarity on the issue of debt accumulation by trying to address the issue of borrowing to fill in the gap of salaries. If this is not clear it is going to create a lot of problems for our country in future. How much money are we owed? Who do owe? When did we accrue those debts? How much is our external debts? What about internal debts?

These issues should be addressed in Parliament. We have a sleeping Parliament. Some don’t even know why they are there. What they only want is to draw allowances, fuel, coupons and other benefits, when the country is sliding into serious oblivion. How did we arrive at such figures as an economy? Are there measures being put in place to avoid such debt accruals in future? There is need for clarity from the government of the day over debt issues.

My conclusion is it will not be easy for the entire government to change the economy within eight months; it is not an easy road. There is need for some adjustments, but because of the level of frustration among Zimbabweans, most people are expecting imminent change, which is not going to happen like that. Change is gradual and it is a process. Therefore, we call upon all people to unite for the betterment of our country.

Tinashe Eric Muzamhindo writes in his personal capacity as the Head of Southern Institute of Policy Analysis and Research – SIPAR TRUST, which is responsible for policy analysis and research. He is also an academic and researcher. He holds a BA, MA from Solusi University, and he also holds a Masters of Development Studies from University of Lusaka, Zambia. He is currently enrolled at University of KwaZulu Natal University in South Africa (PHD in Development Studies). He is also an adviser to many financial and political institutions within and outside Zimbabwe. He can be contacted at southerninstitutepar@gmail.com.