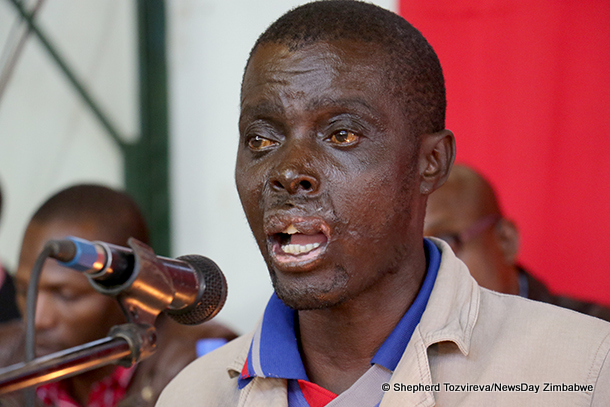 VICTIMS of political violence from across the political divide have come together to form the Zimbabwe Victims of Political Violence (ZVPV) to address their grievances, with United States-based opposition Zimbabwe First party leader Maxwell Zeb Shumba as their patron.

VICTIMS of political violence from across the political divide have come together to form the Zimbabwe Victims of Political Violence (ZVPV) to address their grievances, with United States-based opposition Zimbabwe First party leader Maxwell Zeb Shumba as their patron.

Speaking to NewsDay last week, Mandeya said ZVPV was formed in February this year by disgruntled opposition party members who felt hard-done by their respective parties after falling victim to Zanu PF violence.

“ZVPV was borne out of frustration with opposition political parties, especially MDC-T, which has been the major opposition party from the year 2000 (but) has done nothing to help the victims. The infighting, infiltration within party ranks, dictatorship and factionalism in the party are costing us in particular and Zimbabweans in general,” Mandeya said.

“Our major task is to make sure that victims get assistance without partiality or favouritism. Everybody who sustained crippling injury, sickness or lost their means of livelihood due to destruction of their property is entitled to compensation.”

He added that the ZVPV already had a membership of 6 000 people across the country.

Mandeya said the association would hold its inaugural all-stakeholders meeting in Mutare this month-end where members will elect a substantive committee.

Shumba confirmed being patron of the association.

“It is true, they approached me and I have agreed to work with them. They need to be assisted and I will soon engage relevant stakeholders to put forward some modalities so that political violence victims do get some compensation. I have set up a patron’s office staffed with technical people who will provide technical guidance and advisory services,” Shumba, who is ex-MDC-T leader Morgan Tsvangirai’s chief of staff, said.

However, MDC-T spokesperson Obert Gutu said his party was not aware of the association.

“I have never heard of this association before. I am actually hearing about it for the very first time from you.

MDC-T is a political party that is built upon the social democratic ideological foundation. We respect the right of all Zimbabweans to form whatever lawful associations that they deem necessary. That’s the very essence of a democratic nation state that we are fighting to create in Zimbabwe,” he said.

But, PDP spokesperson Jacob Mafume hailed the move and the appointment of Shumba as political victims association patron.

“Well, if they agreed on him (Shumba) then it is ok, we should move away from stigmatising political actors. That is why (President Robert) Mugabe then becomes a patron of everything, while others are not allowed because they are politicians. These were victims of political violence, therefore, there is no problem with a politician being their patron if they chose him,” Mafume said.