Threats against MPs a new low 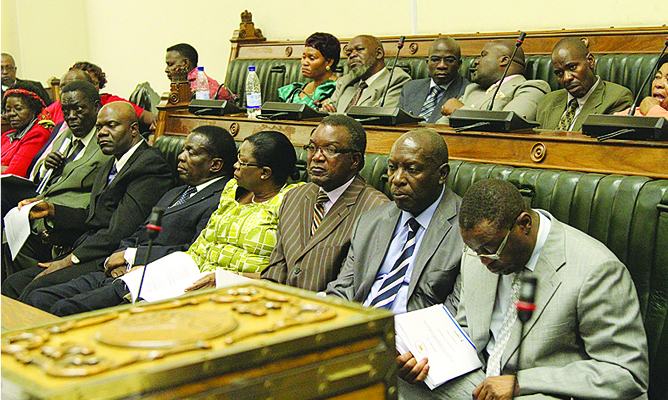 Zimbabwe plunged to new lows of governance after it was revealed that some opposition legislators had received death threats ahead of the farcical opening of Parliament on Tuesday.

Zimbabwe plunged to new lows of governance after it was revealed that some opposition legislators had received death threats ahead of the farcical opening of Parliament on Tuesday.

It was hoped that with the new Constitution, Zimbabwe had made some advances in democracy, but Tuesday’s revelations show that the country has regressed and terribly so.

The messages to the legislators strike at the very heart of our pseudo-democracy and are an indicator that we are not sincere about digging ourselves out of the hole we dug ourselves into.

The assumption is that the messages were meant to pre-empt the opposition from heckling and embarrassing President Robert Mugabe. If this was the intention, then there was no need to resort to such crass, crude and debased tactics.

State media on Tuesday also seemed to warn opposition leaders against heckling Mugabe and this, we believe, lies at the core of the problems Zimbabwe faces.

Mugabe has all but been elevated to a demi-god status, a deity of some sort, that criticising or heckling him is seen as heresy. Parliaments, the world over, are a raucous affair and leaders are generally heckled without any reprisals.

One needs to look no further than neighbouring South Africa, where the leader is heckled, shouted at and described in all manner of terms.

Where South Africa’s opposition has crossed the line, they have been thrown out of Parliament and they in turn have approached the courts and yet we have never heard of death threats being sent to any of them.

It is even more distressing that one of the messages was sent to a legislator’s minor child and we can only ask what kind of barbarity this is.

Parliamentarians should be free to express themselves without fear of reprisals, otherwise there’s no point of holding elections if they are going to be censored and threatened in such a vulgar manner.

The police and Parliament must now take it upon themselves to thoroughly investigate this matter and ensure our legislators, whether ruling party or opposition, are safe.

It is important that Zanu PF also sends a message to its supporters that such behaviour is unacceptable and has no place in a modern country.

If this behaviour is left unchecked, we risk a free-for-all situation, where anyone can do or say anything injurious simply because they are doing so in the name of the ruling party.

While we appreciate that Mugabe spoke against violence at a luncheon following his faux pas during the opening of Parliament, he did not mention the death threats that legislators received and we feel this was an opportunity missed to drive home a very important and pertinent message.

For Zimbabwe to function, we need the Legislature, the Executive and the Judiciary to exercise their duties without fear or interference.

The death threats received by the legislators are a chilling reminder that we are miles away from the democracy and the Zimbabwe we deserve.