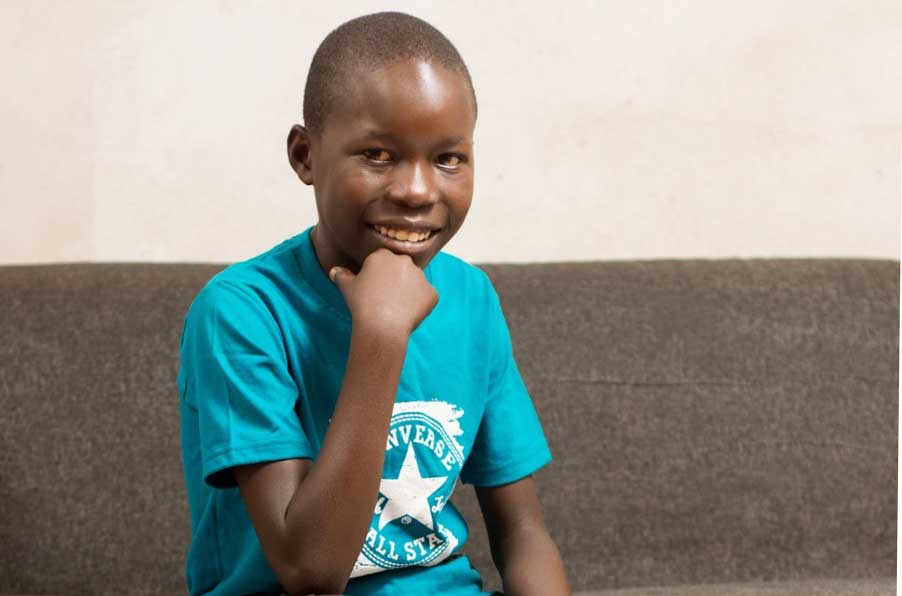 “Everything is well here in Victoria Falls; so far so good,” Andrea The Vocalist told NewsDay Life & Style with a smile moments after he was done with the photo shoots with fans and fellow artistes outside Chinotimba Hall.

BY WINSTONE ANTONIO IN VICTORIA FALLS UNTIL he opens his mouth, Andrea Sibanda is just an ordinary young boy from the dusty streets of Victoria Falls’ Chinotimba high-density suburb.

While other children of his age play with plastic balls, Sibanda, who is popularly known as Andrea The Vocalist, will be busy singing.

He is still raw, a rough diamond that still needs polishing. However, he is a rare music gem that is destined for greater heights if managed properly.

As they say dynamites come in small packages, at the age of 13, he has become a music sensation, possibly the youngest Zimbabwean artiste to have penetrated the regional market before even making it big at home.

Through his melodic voice, the teen star has made parts of southern Africa dance.

Having started singing at a tender age of five, at church and at home, it was just a matter of time before blossoming into a flower and seven years later his voice has echoed and reverberated across southern Africa.

Andrea The Vocalist never knew that an ordinary church singing session would catapult him to stardom.

His video performance on the song Uhambo recently went viral on a video-sharing social networking service TikTok in Zimbabwe and South Africa.

As the video found its way to TikTok where the original post gained more than 1,5 million views within a few hours, a South African rapper and producer Aubrey Qwane was charmed with the song and later recorded its rendition.

The teen singer was later linked to Qwane and they combined their voices for the Uhambo duet produced by South African Funi Emmanuel “Juizee” in Mzansi under JBross Entertainment.

Since then, the young musician has turned heads each time he appears in public.

The treatment he continues to get everytime he storms a public gathering is more prized than his age and miniscule frame.

On a sunny Wednesday, the pint-sized teen singer dressed in a white T-shirt, black pair of jeans and red sneakers received great honour as he entered Chinotimba Municipality Hall in the resort town of Victoria Falls as a delegate to a musicians’ indaba.

The teen singer had decided to be part of the Zimbabwe Music Rights Association’s (Zimura) stakeholders’ copyrights awareness workshop in his own backyard.

In sync with the celebrities’ lifestyle, not only locally, but across the globe, his arrival was punctuated with some Kodak moments with fellow artistes.

Attended by artistes across genres, the police, the Judiciary and business community, among others, the copyrights awareness workshop was meant to correct various misconceptions and close information gaps among stakeholders on the association’s operations.

With many artistes struggling to make it locally, with just a single, the echoes of the teen singer’s music have transcended the southern Africa borders.

Interestingly, his script appears to match and mirror that of fellow Victoria Falls globetrotting Afro-fusion group, Mokoomba who have been celebrated much on the international stage unlike back home.

With all the fame and screams of his name by the public, the talented Andrea The Vocalist is just a shy and humble boy next door.

The teen singer and member of 12 Apostles Church oozes with confidence as he speaks. The confidence is even shown when he poses for a group photo shoot, positioning himself well despite that his small frame is squeezed among the huge bodies.

“Everything is well here in Victoria Falls; so far so good,” Andrea The Vocalist told NewsDay Life & Style with a smile moments after he was done with the photo shoots with fans and fellow artistes outside Chinotimba Hall.

Andrea The Vocalist felt comfortable in the company of Victoria Falls-based Nkanyiso “Tokyo” Moyo, who is part of his management team that also has South Africa-based Zimbabwean artiste manager and record label owner, Tendai Joe.

Although many already predict that his talent will take him to greater heights, Andrea The Vocalist appears to be still too young to know whether music will bring food on his table in future.

“I don’t know yet,” he responded, when asked whether he would consider pursuing music as a career.

Sensibly, Andrea The Vocalist is still young and just needs a lot of guidance in decision-making.

He must be reminded by those close to him that just like other professions, art, in this case music can also be a career that can bring food on the table if taken seriously and with a business approach.

Just looking at the likes of dancehall singer Winky D, Jah Prayzah and sungura maestro Alick Macheso among others, Andrea The Vocalist has good torch bearers on how music can bring “good livelihood”.

Of course, notwithstanding that for other artistes, the same music brought misery, the artistes who have made it should surely inspire one if talented to take up music as a career.

However, this cannot happen overnight. It comes with a lot of ingredients as talent alone might not take someone far.

No doubt, Andrea The Vocalist has the talent, but it needs to be nurtured so that if he decides to take music seriously, his script must not sound like that of many other artistes, whose lives and careers did not have happy endings, owing to various reasons, among them failure to utilise opportunities.

It is encouraging that Andrea The Vocalist’s management seems to understand this.

“The reception he gets every time he is in public is so amazing. They love his song and him as a young artiste who has really put Victoria Falls, Zimbabwe and generally southern Africa at large on the music map,” Moyo said.

“For a young artiste like him to make such waves is a really good thing. For now, we are trying to guide him (Andrea The Vocalist) through his musical journey and also protect him.”

Living in that world of fame, reality has dawned on the teen singer that during the golden age of Zimbabwean entertainment, around the 90s, musicians made hits and rose to fame, but as the fame died down, so did their wealth.

“We have made it a policy that the finances Andrea The Vocalist gets from his music and related activities are going straight into his account. No one gets to control and interfere with this and it has been well accepted by the parents,” Moyo said.

In society and at school, Andrea The Vocalist is said to be a normal boy just like everyone else focusing on their studies.

The teen singer so far has no challenges in balancing between school and music as everything for now is under control, at least according to his management.

“He is doing pretty well at school. He has not been affected yet and this is what we want him to maintain, be able to balance between school and music,” Moyo said, adding that they frequently visited him at school checking on his progress.

“We are happy, he is doing well, so far so good. Thanks to a well-wisher who is assisting him on his academic journey having been charmed by his talent. We will make sure he will not disappoint.”

Andrea The Vocalist has just started making music and has a lot of projects in the pipeline.

“Slow but sure, will be working on something soon. As time permits and when everything is back in order we can work on a project,” he said.

“Maybe you might have heard the buzzes about DJ Maphorisa (South African music producer and singer) wanting to work with Andrea the Vocalist, those are also part of the projects to be coming in the near future,” Moyo said, adding that they had not closed collaboration doors.

“People must keep on supporting Andrea the Vocalist by visiting his social media platforms and buying his music,” Moyo said.

He added: “I think this is one of the youngest artistes we have had who broke into the regional market before he has even made it on the local market. Let’s just remain positive and support him.”

In partying, unlike his management Andrea The Vocalist had not much to say to his fans.

“Right now, I don’t know what to say to the fans,” he said, shying away.

Born to Sanelisiwe Ncube (mother) and Ntando Sibanda (father), Andrea the Vocalist is the second child in a family two boys and two girls.