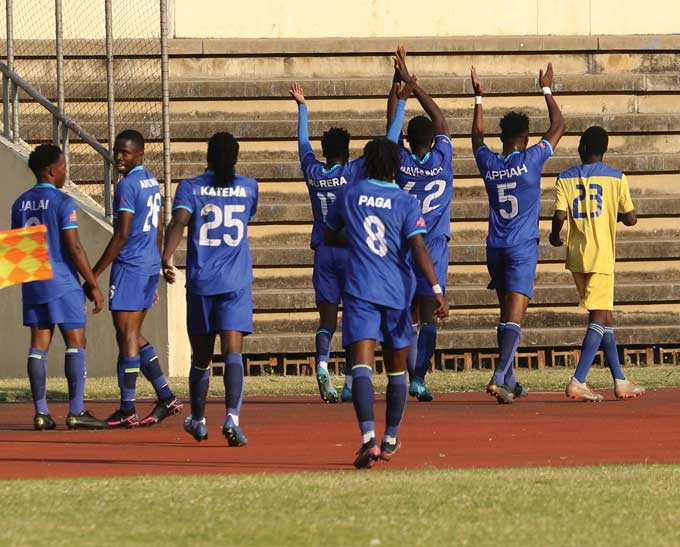 The Harare giants were just over 15 minutes away from being taken to a penalty shootout by the struggling side but the midfielder struck a sensational first-time curler from outside the box to secure his team a place into the quarterfinals of the knockout competition.

A CONTENDER for the goal of the tournament from Trevor Mavhunga gave Dynamos a win over WhaWha in the Chibuku Super Cup first round match at the National Sports Stadium yesterday.

The Harare giants were just over 15 minutes away from being taken to a penalty shootout by the struggling side but the midfielder struck a sensational first-time curler from outside the box to secure his team a place into the quarterfinals of the knockout competition.

The stunning goal, which arrived on 73rd minute saved DeMbare’s blushes after a frustrating afternoon that saw them creating a handful of chances, but failing to hit the target.

Twice, the home side hit the woodwork, first through the returning Frank Makarati whose first half header from a corner kick clipped the top of the cross bar before Emmanuel Paga also hit the upright early in the second half after he had been put through on goal. It was one of the several chances that the often-reliable Ghanaian forward squandered.

Dynamos coach Tonderai Ndiraya was left frustrated by the number of opportunities that his men wasted with Ralph Kawondera and Evans Katema the chief culprits in a match the home side largely dominated.

“I’m happy that we have qualified to the next round of the competition but not entirely happy with the way we performed today especially in the first half,” Ndiraya mourned.

“When you fail to put the game to bed you start to become impatient and desperate, but I’m glad that we kept our cool in the second half and continued to create chances. I would have wanted us to score from the numerous chances that we created but, in the end, it took the anticipation and brilliance of Trevor to score that goal.”

WhaWha, as expected, set themselves to defend in the first half and only found their rhythm late in the second half especially after the introduction of Calum English Brown.

The winger caused all sorts of problems for the DeMbare defenders, in particular Godknows Murwira, and was involved in almost all the chances that his side created late on. The best of those opportunities fell to their main man Jayden Barake who first fired just wide from a good cutback before forcing a good save from keeper Taimon Mvula.

English-Brown was so good in those few minutes that he featured his name was sung loud by the Dynamos fans who invited him to their bay for a salute after the match.

In his post-match interview, Whawha coach Luke Petros regretted on sending English-Brown into the match late.

“It’s back to the drawing board for us,” said the Warriors legend whose team is sitting on the basement of the log standings in the league.

“We missed a lot of chances which is our main worry. We are creating a lot of opportunities, but the youngsters are failing to utilise them. But we still give them the plaudits because they are still kids. In the first half we setup ourselves in a way to soak up pressure.

“Tactically we were OK, I don’t have any had feeling on what happened and also the opportunities that we got and failed to utilise. It’s tough luck to the boys.”