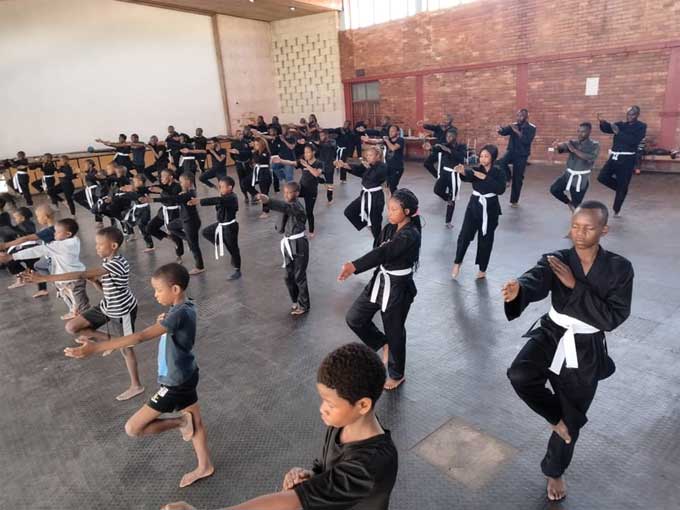 Speaking to The Sports Hub, ZimNinja Academy secretary general Chris Garatsa said the event was a success as more than 40 people participated.

BY MELINDA KUSEMACHIBI ZIMNINJA Academy, an affiliate of the Zimbabwe Karate Union (ZKU) has successfully staged the first ever Ninjutsu grading event to be held in the country.

The event was held on August 6, 2022 at Morris depot which is the home and venue for the academy’s training and it was led by the country’s pioneer of the discipline chief instructor Shdoshi-ho Wilfred Mashaya.

Speaking to The Sports Hub, ZimNinja Academy secretary general Chris Garatsa said the event was a success as more than 40 people participated.

“At least 50 participants including men, women and children participated at the event. They were being graded from White belt 10th kyu (mukyu) to 9th kyu green belt. This is the first stage of grading. The Ninjutsu martial arts originated in Japan and here in Zimbabwe, Mashaya holds a black belt in the discipline making him Zimbabwe’s first certified ninja and authorized to hold such a grading,” said Garatsa.

Garatsa also said Mashaya’s mission was to spread the goodness of martial arts in the country.

“Mashaya, the 2018 Zimbabwe Sportsperson of the year, Regional Sportsman of the year and a holder of four black belts from different martial arts disciplines, is on a mission to spread the goodness of martial arts in the country. He founded the academy and has since introduced to the country new styles: Ninjutsu and Kobudo (Weapons), he has become the appointed Country representative and ambassador of martial arts disciplines such as Bujinkan Ninjutsu, Kobudo and Self-defence,” added Garatsa.

Zimbabwe Bujinkan Ninjutsu is under the authority and guidance of grandmaster Dai Shihan Lazarevic Predag from the European country of Montenegro and is said to be the mentor of Mashaya.

ZimNinja is raising the flag of Zimbabwe high in participating and winning a number of martial arts competitions with at least 200 medals won since 2020.

Meanwhile, a ZKU-Zimbabwe Kobudo national team is already training as it prepares to represent the country in the WKA world championships to be held in Poland between September 15 and 18.