In the groove: Chiwoniso Maraire remembered 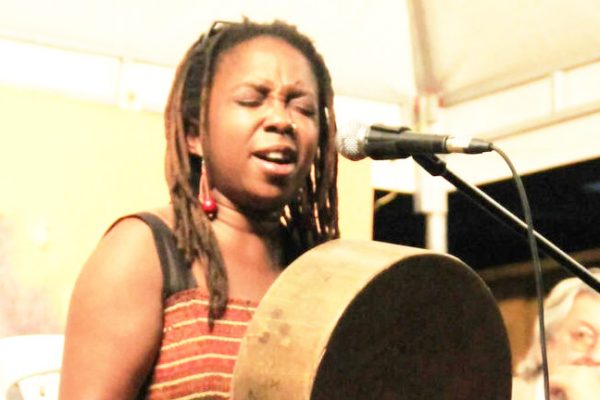 Chiwoniso Maraire was born on March 5, 1976 in Olympia, Washington, US and died on July 24, 2013. She was the daughter of Zimbabwean mbira master and teacher Dumisani Abraham Maraire who was an officer in the Zimbabwe Ministry of Sports and Culture in the early 1980s.

By Fred Zindi It is exactly nine years since the iconic Chiwoniso Maraire died.

Those of you who had the privilege to see her in action have memories to cherish forever.

I had the opportunity to interact with her when I was teaching Ethnomusicology at the Zimbabwe College of Music.

One Monday morning, I invited The Zairean singer, Kanda Bongo Man to the college to come and hear two beautiful voices from Miriam Mandipira, another iconic singer, and Chiwoniso.

He was so impressed that he wanted to take these two girls to Zaire with him. We stumbled on the contracts which Bongo Man could not fulfil.

Chiwoniso Maraire was born on March 5, 1976 in Olympia, Washington, US and died on July 24, 2013. She was the daughter of Zimbabwean mbira master and teacher Dumisani Abraham Maraire who was an officer in the Zimbabwe Ministry of Sports and Culture in the early 1980s.

Dumisani was born in Chakohwa near Mutare on December 27, 1944. He moved to the United States in 1967 where he started teaching music from 1968 through 1972 at the University of Washington (UW) in Seattle. He taught the mbira and marimba instruments.

His children, Tendai Maraire, Dumi Maraire Junior and Chiwoniso were born in the United States.

In 1968, the Ethnomusicology Division of the University of Washington hired the talented young Maraire as a visiting artist.

Dumi taught at the University of Washington (UW) for 5 years, and continued to reside in Seattle until 1982, teaching hundreds of people to play Zimbabwean music. Dumi’s marimba ensembles became renowned throughout much of the Northwest, performing at fairs and festivals, in schools and clubs, and releasing several albums.

In 1990, Maraire earned his Doctorate from the UW School of Music and returned home to teach at the University of Zimbabwe in Harare.

Maraire is credited for his contribution to music in Seattle and North America in general. Maraire died on November 25, 1999 in Zimbabwe after suffering a stroke.

Before his death, he had invested his cultural knowledge of mbira playing in his daughter Chiwoniso who soon rose to be a mbira music icon and musician.

Chiwoniso then zoomed through a selection of her hit songs Wandirasa and Iwayi Nesu Mwari Baba with the vigour of a woman half her age. With her mbira and smooth vocals, she not only became a local star but also an international one.

When the family moved back to Zimbabwe, Chiwoniso also came back with her father who taught her to play mbira. Together they did gigs in clubs and churches while she attended the Zimbabwe College of Music where she did a National Certificate in Music (NCM) programme.

She later joined The Storm, an Afro-beat band led by Andy Brown with whom she later had two children, Chengeto and Chiedza.

The Storm became one of Zimbabwe’s biggest bands, touring the world and winning accolades…. Maraire’s firm voice and Brown’s plucky guitar made a beautiful combination.

In 1995, she recorded an album, Ancient Voices where she mixed traditional and modern beats, sang in English and Shona, and used both contemporary instruments and traditional African instruments such as the mbira, hosho and ngoma. Her favourite mbira was the nyunga nyunga.

Born in 1976 in Olympia, Washington, where her father had moved his family, the song bird spent the first seven years of her life in the US.

She spent a portion of her high school years attending The Northwest School in Seattle, Washington. When she moved back to Zimbabwe she attended Mutare Girls’ High School and took evening classes at the University of Zimbabwe, where her father was teaching.

In September 2008, Chiwoniso released her fourth album and first international album in over ten years, titled Rebel Woman. The album perfectly mirrored Chiwoniso’s life in the sense that she sang about all her personal experiences and those of others. From her own spirituality to a passer-by on the street, every song in Rebel Woman was influenced by a specific event in her life. In the album, Chiwoniso blended ancient, African soul with modern spirit accompanied with the melodies of the mbira and deep grooves.

In late 2008, Chiwoniso moved back to the United States where promoters arranged a tour of Europe and Canada for her. She returned to Zimbabwe in 2010.

While on tour in Denmark Chiwoniso spoke out against police brutality and violence in Zimbabwe.

Chiwoniso died on July 24, 2013 aged 37. Her death robbed the music fraternity of a sincere, creative, innovative, serious and dedicated singer and performer, but most of all, her death seemed to have buried the mbira genre with her. She was instrumental in bringing Zimbabwean mbira music to the international world and to a higher level.

Mbira was forbidden in colonial times where it was considered the sound of the devil.

Mbira music has been instrumental in sustaining the ancient musical traditions of Zimbabwe but unfortunately it is slowly disappearing as most young people turn their backs on this tradition.

Could the connection with spirit mediums and being possessed by ancestral spirits be the reason why many young Zimbabweans resent mbira music?

Or is it just because they prefer modern Western music with western instruments? I am still yet to find out, but one thing for sure is the fact that mbira is no longer being accepted the way it was during the 1980s.

In the early 1990s, when she was 15, she formed part of the Afro-fusion hip-hop trio A Peace of Ebony, which “was perhaps the first group to fuse mbira with contemporary beats”.

From 2001 to 2004, she was also a core member of the multinational all-women band Women’s Voice, whose original members hailed from Norway, Zimbabwe, Tanzania,  United States, Israel, and Algeria.

Chiwoniso also starred in film, having worked on the soundtracks for movies and documentaries by an array of Zimbabwean writers and film producers. She made her last recording in March 2013, and Zvichapera, a cover of Thomas Mapfumo’s song, was released posthumously in 2015.

Chiwoniso died at South Medical Hospital in Chitungwiza, Zimbabwe, aged 37. According to her manager Cosmas Zamangwe, she had been admitted to hospital 10 days earlier suffering from chest pains. The cause of death was the result of suspected pneumonia, just a year after the death of her ex-husband, Andy Brown, also a prominent musician.

The couple left behind two daughters, Chengeto and Chiedza.

She was buried at her rural home in Chakohwa village in Mutambara.

On September 12, 2015, the younger of her daughters, 15-year old Chiedza Brown, committed suicide. Chiedza was also a musician in the Mbira tradition like her mother and an accomplished singer.

The last surviving member of Maraire’s family with Andy Brown is her daughter, Chengeto.

Chiwoniso was honoured by Radio France (“Decouverte Afrique”) for her debut album, Ancient Voices (1998), and was nominated in the Kora All-Africa Music Awards for best female vocals of Africa in 1999.The album entered the World Music Charts Europe three times.

Other female mbira players such as Diana Samkange and Hope Masike in Zimbabwe have come to the fore but they are yet to meet the standards set by Chiwoniso in advancing that instrument both nationally and internationally.