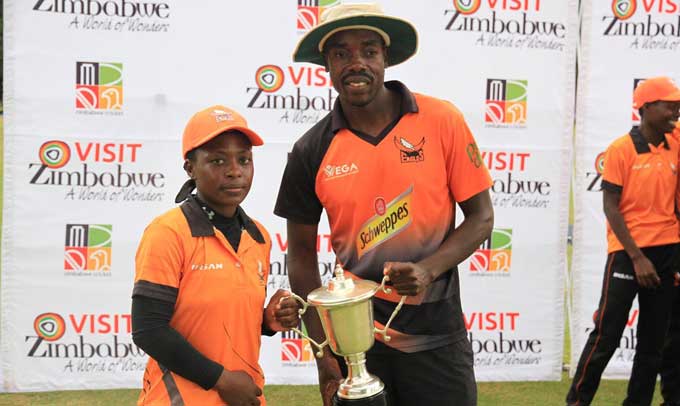 The 35-year-old former fast bowler, who played one ODI for Zimbabwe became the first coach to make a clean sweep of domestic titles after helping the Harare based to a successful defence of their T20 Cup after beating Mountaineers by seven wickets at Harare Sports Club on Thursday.

WHAT a debut season it has been for Alliance Health Eagles women team coach Trevor Garwe.

The 35-year-old former fast bowler, who played one ODI for Zimbabwe became the first coach to make a clean sweep of domestic titles after helping the Harare based to a successful defence of their T20 Cup after beating Mountaineers by seven wickets at Harare Sports Club on Thursday.

Earlier in the month Eagles scooped the 2021/22 Fifty50 Challenge Cup in dominant fashion after beating Rhinos by 157 runs at Old Hararians.

Garwe’s coaching career began barely four years ago when he doubled as player/ bowling coach in the Eagles men set up during the 2018/19 until he called time on his playing career before the end of the 2020 season.

The former cricketer from Glen View township in Harare had a stint with the women national team as the bowling coach.

It’s only been two years as full-time coach and Garwe is already breaking records.

“I am really excited to achieve such a great milestone in my first season as the Alliance Health Eagles women Head coach and also just to  be the first coach to win both Fifty50 Challenge and T20 tournaments. It’s something that we could not achieve without God’s grace,” Garwe told The Sports Hub in an exclusive interview.

What is more impressive about the Garwe’s Eagles team is that it uncovered a lot of young talent with teenagers such as Kellies Ndlovu who was player of the tournament in the T20 Cup, Believe Biza, Mitchell Mavunga and Olinda Chare coming to the fore.

Garwe reflects on how he managed to build a mean machine out of the Eagles women’s team.

“The first thing was to build a group of players that have the attitude to go on the field and be competitive and the aim was to try to get the best out of them, which we managed to achieve,” he said.

“I think my team had the right attitude on and off the field, everyone was very committed to whatever we agreed to commit to as a group and that was the difference between us and other teams.

“We just said we are going to play fearless cricket throughout and that helped us because they were not scared to make mistakes.”

Despite achieving so much in a short space of time, Garwe is a man on a mission and the mission is to help the Zimbabwe women’s team qualify for the World Cup while he shares his sentiment on women’s cricket in the country.

“The ultimate goal for me is to help our ladies national team qualify for the World Cup.

“It’s impressive to see the number of young players coming up especially after the just ended tournament. It shows we are moving in the right direction. I think we now have a large player base to choose from which is healthy for our national team,” he said.

Garwe’ s cricket journey started when he was a Form One kid at Glen View 1 High School.

“My brother was the teacher in charge of cricket back then, so he used to tell me about the trips out of Harare and that pushed me to join cricket,” he said.

“When I was in Form Two I went and joined Takashinga cricket club and that was the turning point of my career, I went on to play first class in 2003/2004 season for Mashonaland, ZimbabwUnder-19, the CFX Cricket Academy, Zimbabwe A and Zimbabwe national team in 2009.”

In spite of his immense potential as a fast bowler, Garwe made only ODI start for Zimbabwe in a match against Kenya in 2009.

“To be fair I felt I could have played a lot more games for my country but who am I to go against the will of God. I am sure God knows what lies in the future for me,” he added.