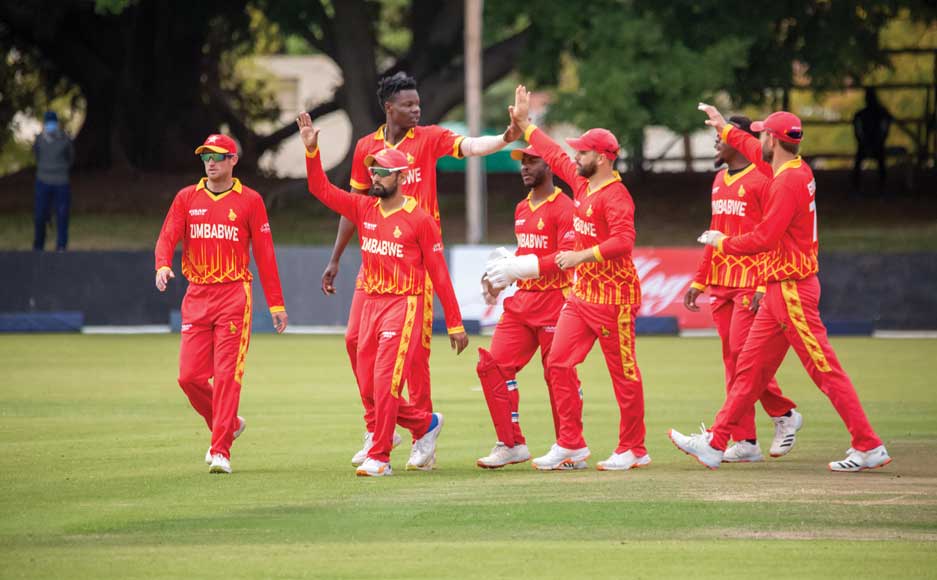 Zimbabwe and Netherlands qualified to the Australia finals after winning against Papua New Guinea and United States of America respectively to set up today’s final.

BY KEVIN MAPASURE IN BULAWAYO THE Zimbabwe and Netherlands national cricket teams will have their sights on favourable placing in the round one groups of the 2022 ICC Men’s T20 World Cup to be played in Australia when they collide in the final of the qualifying tournament at Queens Sports Club this afternoon.

Winners of the tournament will not only get a winner’s trophy and global ranking points, but also the big prize of getting placed in Group A of the preliminary rounds of the tournament that contains Sri Lanka, United Arab Emirates and Nambia at the finals.

The losers will face West Indies, Ireland and Scotland at the global showcase which is bit of a tougher challenge compared to the other pool.

Zimbabwe and Netherlands qualified to the Australia finals after winning against Papua New Guinea and United States of America respectively to set up today’s final.

Chevrons captain Craig Ervine said that they came into the tournament with the target of winning all five matches that they were involved in and had so far won four.

They will be looking to finish off with a flourish when they take on the Dutch side that have shown how much of a good side they are especially when they outplayed the United States of America with a seven wicket win on Friday in the semifinal at Bulawayo Athletic Club.

“Winning makes the changing room cohesive and a happy place. Our fans come to support us and one of our goals coming into this tournament was to win five out five and even looking forward if we win this one our Group at the World Cup is slightly easier . We are trying to build Zimbabwe cricket up so every game is important,” Ervine told the media.

He said that Zimbabwean cricket has been on the rise and it’s important for the team to keep winning.

“If you look at the way we have been playing we are on the rise. The important thing is to try and keep getting better. This tournament has created a lot of confidence, some momentum and also belief among Zimbabweans.”

Head coach Dave Houghton, who replaced Lalchand Rajput only a few weeks before the tournament after 3-0 T20 and one-day international series losses at home to Afghanistan, expressed relief at qualifying for the World Cup and stressed that Zimbabwe needed not go via such routes.

“It feels good to qualify and it feels like a relief because these associate sides are not bad sides. We had added pressure; we were expected to win so I am thrilled with the way the boys have responded. Job is not done we want to win on Sunday,” he said.

The Zimbabwe legend, who had prior to the start of the tournament challenged his players to play with freedom, said he was pleased that the team, especially the batsmen had heeded the call thus far during the qualifiers.

“The biggest thing I have done since I came was to unlock the fear, I have (always) known that our players are very talented and skillful so I have just tried to take the fear away and let them play. We have seen the result, our batting is exciting now we take sides on, our bowling and fielding has always been of a good standard but we are playing aggressive and exciting cricket which the crowd likes,” Houghton said.

Inside sport: Taking the right path
SRC has promised that Zifa will communicate with Fifa as soon as the recommendations are complied with; something that brings hope that one day, our football will be back to the good old days.
Sport
By Michael Kariati
6h ago

Garan’anga relishing European football dance with Sheriff Tiraspol
The Moldovan club’s total domestic dominance means they are almost guaranteed to have a shot at qualifying for European football every season for the last 20 years.
Sport
By Daniel Nhakaniso
6h ago

School of sport: IT IS ALL A BIG CON!
The only verdict is vengeance; a vendetta, held as a votive, not in vain, for the value and veracity of such shall one day vindicate the vigilant and the virtuous.
Sport
By Tim Middleton
6h ago

By Michael Kariati 6h ago
Inside sport: Taking the right path

By Tim Middleton 6h ago
School of sport: IT IS ALL A BIG CON!