Revealed: Why ED is panicking over Z$ 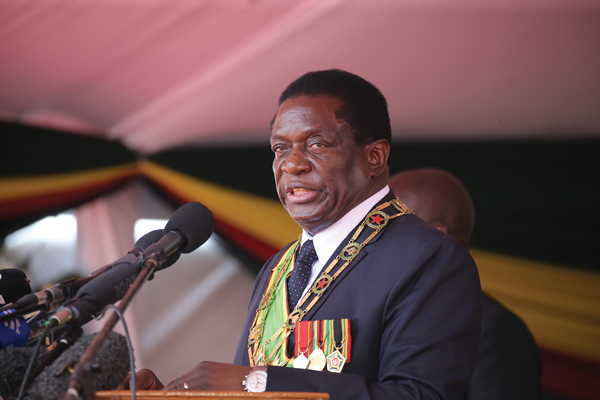 Insiders told The Standard that Mnangagwa last week met owners of companies that authorities blame for the exchange rate volatility.

President Emmerson Mnangagwa has been summoning business owners his government believes are manipulating the Zimbabwe dollar to fuel anger over his rule amid growing fears an economic implosion could result in blood bath for the ruling Zanu PF in next year’s elections.

Insiders told The Standard that Mnangagwa last week met owners of companies that authorities blame for the exchange rate volatility.

The meetings followed the president’s May 7 decree stopping banks from lending activities or offering credit lines to businesses and individuals.

Mnangagwa’s order left many companies reeling as they were forced to stop credit facilities and advance payments.

Besides individual business leaders, Mnangagwa met the Confederation of Zimbabwe Industries (CZI) where he gave captains of industry a tongue lashing over allegations that they were sabotaging the local currency.

CZI president Kurai Matsheza confirmed the meeting to The Standard yesterday, saying they were happy that Mnangagwa gave them the platform to talk about the currency measures.

“We engaged the president and we are expecting the best outcome from those deliberations,” Matsheza said.

“The engagement process is still ongoing and when we have finished the talk, the result will be publicised.

“We are glad that he allowed us to meet him to talk about such issues affecting the industries.”

“We are Members of Parliament, elected to do and carryout the functions defined in the constitution.

“How can we wake up as Members of Parliament and be told that banks have been banned? It is unconstitutional and we hold the powers.

“How can we wake up and be told that intermediated money transfer tax is now 4%?

“How can we wake up and be told that to withdraw your own money, US$$1000 you have to pay a 2% levy? We cannot rule by decree Madam Speaker.”

Zanu PF will hold its congress later this year and there is speculation that Mnangagwa could be challenged by his deputy Constantino Chiwenga.

“Mnangagwa’s measures were calculated to deal with the pressure he is facing internally over the state of the economy,” said a senior Zanu PF member.

“There are a lot of dynamics at play with the upcoming congress and growing fears that CCC is gaining ground against Zanu PF.

“There is also the constant fear that the president is being sabotaged by enemies from within and outside the party.”

In a rare critique, Zanu PF chief whip Pupurai Togarepi told Parliament that the currency measures could harm the economy if they were maintained for a long time.

“Surely, I want to say as a short term measure, the suspension of lending could be helpful but as a long term or even in the medium term, it may have challenges,” Togarepi said.

Mnangagwa’s spokesperson George Charamba was not picking calls yesterday while Industry minister Sekai Nzenza was said to be in a meeting.

Analysts said the measures were reactionary.  Victor Bhoroma, a Harare based economist,  said corruption was the root cause of the country’s economic woes.

“The real causes of the economic failures we are witnessing today have their roots at the central bank,” Boroma said.

“The bank has no independence from political interference and has zero willingness to allow market forces to determine the price of foreign currency .”

“This is a backdoor economic policy that will not support productivity,” Mutambasere said.

“We are basically crippling the productive value chain and we are now introducing a liquidity  crisis into our productive sectors.”

The Zimbabwe dollar, which was reintroduced in 2019 after a decade of dollarisation, has been losing value rapidly and the government two years ago started pushing for a dual currency system in the economy.

The use of the United States dollar has become more dominant while the majority of workers are still being paid in local currency.