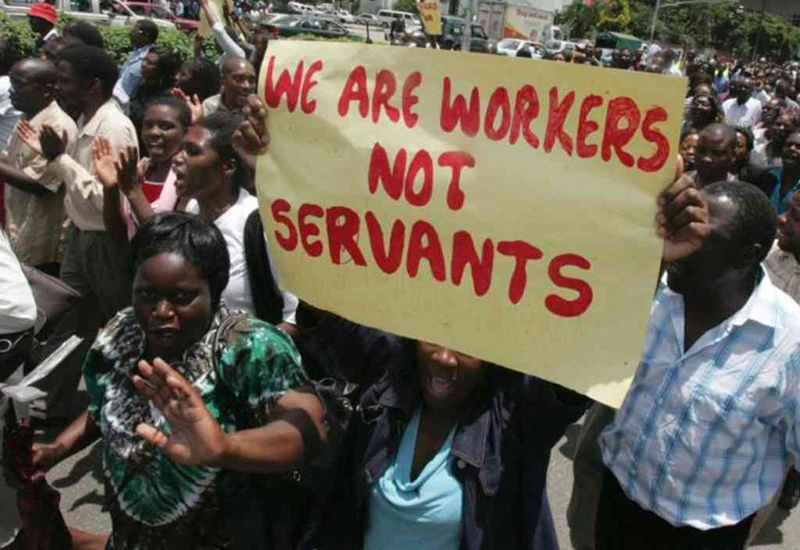 They are striking over poor salaries and conditions of service. The decision to down tools came after talks with government over the issue had fallen through and were abandoned.

Civil servants have resolved to withdraw their labour beginning this week, throwing all government business into jeopardy and bringing all social services, including health and education to a standstill.

They are striking over poor salaries and conditions of service. The decision to down tools came after talks with government over the issue had fallen through and were abandoned.

Teachers, health workers and the rest of the civil service are not happy with government’s unilateral decisions that have seen offers of un-negotiated salaries and conditions of service. They demand US dollar salaries and improved working conditions.

Health workers had gone on strike last month but suspended the job action to allow for negotiations which have now suffered stillbirth.

The labour unrest in Zimbabwe’s civil service and in particular the education and health sectors has become so commonplace one would be excused to believe it is an annual ritual.

Not a year passes without teachers and health staff withdrawing their services over poor salaries. Every time this happens the government provides temporary solutions, sometimes coercion, including dismissal threats and physical assault, to get schools and hospitals running again.

When teachers refused to go to work last year, Finance minister Mthuli Ncube told the nation that the economy would, within a year, be so good that teachers would revert to their 2013 salaries of US$540 by 2022.

Not only has this promise prove to be false, but the teachers’ earnings have since deteriorated in real terms owing to unrelenting inflation, pushing teachers to come out to complain again in January this year. The government reacted with heavy-handed response, chasing, beating up and arresting the teachers and their representatives.

Such momentary firefighting methods and intimidator tactics by the government will not bring lasting solutions to the disquiet in these critical sectors and President Emmerson Mnangagwa’s government is not doing itself a favour by perpetuating this problem.

Teachers and nurses have for years been forced to accept poverty as a way of life, gradually robbed of the dignity and respect that their professions command. The government needs to change its stance and restore the dignity of our nurses and teachers.

Mnangagwa should know that governing a restive civil service and abandoning provision of social services has been one of the biggest mistakes that the Zanu PF government has made since the Mugabe era.

Besides wreaking havoc on the lives of the people, a disabled social service provision encourages the emergence of, and nourishment of existing alternatives on Zimbabwe’s political landscape. So, the decision by government to allot civil service emoluments the bottom tier has not, after all, been in its favour.

The government will do itself a big favour therefore to understand that disinvestment in health and education provision is in itself a political own goal. Political survival, which Mnangagwa wants so desperately, really hinges on satisfying the masses’ needs for such social services as health and education.

Violent and bloody elections ahead

What happened in Gokwe on Thursday heralds the beginning of political violence that will blight the 2023 elections whose results will predictably be disputed.

Appearing before the Committee on the Elimination of Racial Discrimination on August 18 in Geneva that discussed a periodic review of Zimbabwe, Ziyambi  claimed the post-independence atrocities, that have become to be known as Gukurahundi, were not confined to Matabeleland and Midlands provinces.

Time to plan for returning residents

South Africa last year announced that the Zimbabwe Exemption Permits (ZEP) dispensation will come to an end in December this year.

A majority of Zimbabwean workers, including civil servants, are mostly paid in local currency and they have limited access to foreign currency, which makes the government’s position on school fees unreasonable.

By The Standard Aug. 28, 2022
Violent and bloody elections ahead

By The Standard Aug. 14, 2022
Time to plan for returning residents

By The Standard Aug. 7, 2022
Charging school fees in forex unreasonable