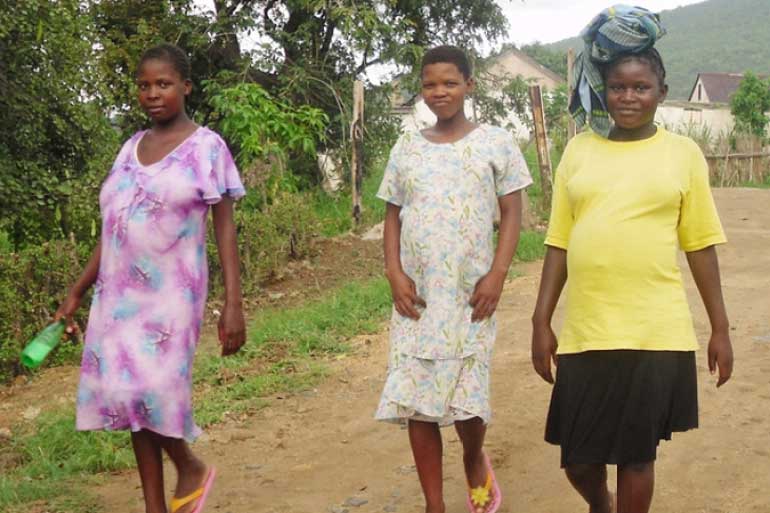 “My husband insists I should give birth to eight children or more, which he claims is part of his family culture,” said Chauke.

By Moses Mugugunyeki THIRTY-THREE-YEAR OLD Memory Chauke has given birth to four children in the past 14 years and is expecting the fifth in a few weeks’ time.

Because of previous painful experiences, Chauke of Magezi village in Chiredzi ward 14 is scared of the day she goes into labour.

She says in between she had several miscarriages.

“My husband insists I should give birth to eight children or more, which he claims is part of his family culture,” said Chauke.

“However, I feel weak and without energy to carry more pregnancies after this one.”

Chauke looks frail and vulnerable, but her husband has threatened to marry another woman if she does not give him the eight children that he wants.

“I have allowed my husband to marry someone who can bear him more children, but sometimes he insists he wants me to give him those children because he paid dowry for me to do just that,” she said.

However, the couple is having difficulties looking after the four children that they have and Chauke wonders how the situation would be like with eight offsprings.

Chauke is among a handful of expecting mothers who had come for routine antenatal healthcare service.

Fortunately for Chauke, the clinic is a walking distance from her home unlike other expecting mothers who have to travel for long distances to give a life.

However, despite the close distance to the health facility, Chauke shares the same predicament with hordes of women in Chiredzi and many other rural communities in Zimbabwe of husbands who demand to have many children.

Public health expect and medical doctor Bernard Madzima said early childbearing and back-to-back births impact negatively on women through impairment of their health and that of their offspring.

“Mothers who have multiple pregnancies are likely to have premature babies, so we need to gather against that and make sure they give birth in a safe environment,” Madzima said.

“The mothers are also likely to develop hypertension, they can develop postpartum bellies and they are prone to low blood volumes.”

Madzima said the risk factors increase when women give birth when they’re too young, too old, have too many or have back-to-back pregnancies.

Chauke said her husband did not proceed to secondary school after completing his primary education as he was lured by the power of the rand and crossed into South Africa.

“I think because of his level of education, my husband does not want us to use contraceptives at all,” she said.

“When you get pregnant, he doesn’t even care and is not concerned about your health.”

According to UNFPA, the country’s contraceptive prevalence rate, which is the proportion of women aged 15-49 using family planning is 67%, an improvement from 59% in 2010.  This is one of the highest on the continent.

Unmet need for family planning among married couples is 10% in urban areas and 11% in rural areas while unmet need for young people is 12.6%.

“Family planning ensures that the outcome of a pregnancy is positive for both mother and child,” Rusike said.

“The family planning methods used in Zimbabwe, including oral contraceptive pills, injectable contraceptives and male condoms are safe and are used in many countries across the globe, including in the US and Europe.

“Community health workers and community based distributors were instrumental in implementing the successful Zimbabwe Family Planning Programme in the early 1980s as they helped raise awareness on family planning methods such as condoms and combined oral contraceptives as well as the advantages of child spacing.

“As one indication of these differentials, there is double the risk of adolescent pregnancy in the lowest income groups than the highest income groups and in rural females compared to urban females,” he said.

The WHO estimates that about 200 million couples in developing countries would like to delay or stop childbearing but do not use any method of contraception because of the lack of access, limited choices, fear and cultural or religious reasons.

Despite these challenges, the global population is projected to reach eight billion on November 15, according to the World Population Prospects 2022, released last Monday by the United Nations Department of Economic and Social Affairs.

“Yes, it’s a milestone, but we still have a lot of women who are dying while giving birth globally, particularly in developing countries, Zimbabwe included,” Chirwa-Tumbo said.

“With every pregnancy and birth, a woman’s risk of dying increases and this is widespread in developing countries where use of family planning methods is limited.

“Pregnancy and childbirth complications remain widespread and are among the leading causes of death among women living in developing countries, Zimbabwe included.”

Chirwa-Tumbo said each pregnancy increases the mother’s health risks, especially in rural areas where there is a shortage of health facilities.