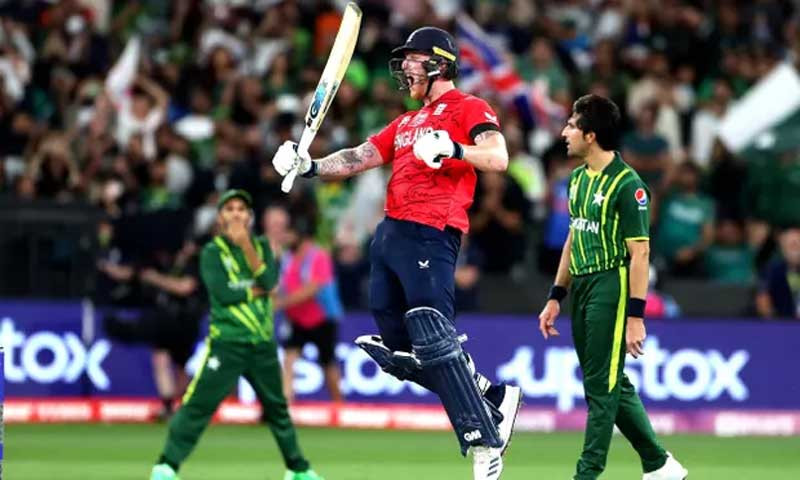 Ben Stokes was the hero for England

England have won the T20 World Cup for the second time, narrowly beating Pakistan, with Ben Stokes’s batting key to victory at the Melbourne Cricket Ground. England’s Test captain, serving under T20 leader Jos Buttler, was yet again the man for the big occasion, hitting a half-century, his first in T20, that owed more to guile than power. And he hit the winning runs to confirm the title, having been England’s fall guy when they lost the 2016 final.

Pakistan had scored what looked an under-par 137 as Adil Rashid and Sam Curran starred among England’s bowlers, Rashis taking two wickets for 22, including a wicket maiden and Curran taking three for just 12 runs. Babar Azam, the captain, on 32, and Shan Masood on 38 top scorers. Iftikhar Ahmed was out for a duck to Ben Stokes. Chris Jordan weighed in with a couple of wickets. Liam Livingstone took three catches, though his sole over went for 16, with England not at their best in the field

England suffered an early blow when Alex Hales, their star opener all tournament, was out for one, bowled by Shaheen Shah Afridi, taking his customary wicket in his opening over, to lift a crowd dominated by Pakistan fans. Phil Salt was out for 10 when holing out to Iftikihar, who took a fine catch, and then Pakistan took the key wicket of Jos Buttler, the England captain, with Mohammad Rizwan, the wicketkeeper taking the edge off the bowling of Haris Rauf.

That put on the onus on Stokes, firstly in a partnership with Harry Brook, to face down some fierce Pakistan bowling, not least from Naseem Shah, who beat Stokes’s bat three times in an over but a DRS claim that the Englishman had nicked the ball was turned down. Brook fell for 20 when chipping to Shaheen Afridi from Shadab Khan. Afridi’s catch came at the cost of an injury that caused him to leave the field. His return to bowling saw him hobbling and, unable to complete an over, he could take no further part.

Moeen Ali was now in an experienced partnership with Stokes that left England needing 41 off 30 balls. Stokes, following a near-miss, then hit a couple of boundaries that took England within reach, the second a six. Moeen played his part, too, in accelerating towards the finishing line, but was bowled by a yorker from Mohammad Wasim in the penultimate over.

Pakistan’s total was 31 fewer than India managed against England in the semi-final. Buttler’s team went in to the final at the MCG with an unchanged side, meaning Dawid Malan and Mark Wood were again absent.

The pair missed the 10-wicket semi-final thrashing of India last time out because of injury. Chris Jordan and Phil Salt were retained as Buttler elected to bowl first. Pakistan named the same XI from the team that beat New Zealand in the other semi-final.

England wore black armbands in tribute to David English, who established the Bunbury Festival which fostered the careers of countless first-class cricketers. He died on Saturday night, aged 76.