Iran: All options are bad 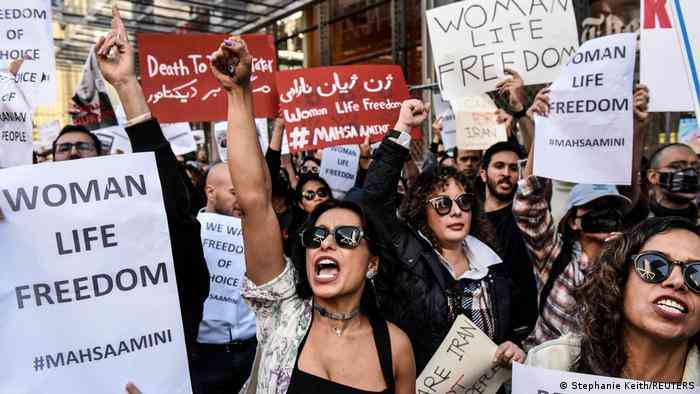 “Death to (fill in the blank)!” has been the slogan of choice chanted by Iranian protesters since the glory days of the Islamic Revolution in 1979. (“Death to the Shah!”, “Death to America!”, etc.) It’s now 43 years later, however, and the content has become a bit more nuanced.

The most popular chant of the young men and women (mostly under 25) who are now going to the streets all over Iran is “Zan! Zendegi! Azadi!” (“Women! Life! Freedom!”). “Women” comes first because it was the beating and death in custody of a 22-year-old woman arrested for letting too much hair show under her hijab that set the protests off.

The revolt is led by young women, to the extent that it has no leaders at all, and they are still protesting after a month despite around 250 people killed by the regime’s forces and 12 500 arrested. Moreover, these protests are targeting the theocratic dictatorship as a whole, not just its various misdeeds and failings.

“Death to the dictator” or “Death to Khamenei!”, they chant, meaning Supreme Leader Ayatollah Ali Khamenei, in power since 1989. But they oppose any dictatorship, not just the current one, so they also condemn the former king whom the Islamic Revolution overthrew: “Death to the Shah!”

That won’t weaken the determination of the Revolution’s beneficiaries, including several hundred thousand well-armed religious fanatics in the Basij militia and the Iranian Revolutionary Guard Corps (IRGC), to defend the regime to the bitter end.

Ayatollah Khamenei made the regime’s response clear a few days after the protests started. He called them “riots”, and said that they were “engineered by America and the occupying, false Zionist regime (Israel), as well as their paid agents, with the help of some traitorous Iranians abroad”.

He may even believe that (he doesn’t get out much), but either way the die is cast. In order to overthrow the regime that the younger generation now reject, they will have to fight it.

The final battle may not happen now: in the past few days, the number of people daring to go into the streets and defy the regime’s enforcers seems to be dwindling. But it will come sooner or later, and it may not end well.

There are three possible outcomes. Option One is that it ends like the Shah’s overthrow in 1979. The crowds come out in ever greater numbers, offering themselves up to be slain by the “security” forces, until the enforcers themselves grow sickened by the scale of the killing and refuse to shoot the citizens any more.

This is unlikely, because the rebels this time are not motivated by the religious fervour that drove their grandparents four decades ago. Endless, willing self-sacrifice before the guns of the oppressors is not a style that will appeal to them, nor would the current regime just walk away like the Shah eventually did.

The second option is that the rebels arm themselves somehow and try to bring the regime down by force. But the only way they would get large quantities of weapons is if significant numbers of the IRGC and the Basij defected to them. That’s unlikely, so it would probably just end up as a huge bloodbath, but no regime change.

There is a third option, but it would probably lead to an even bigger bloodbath. If the young protesters did get enough weapons to take on the regime’s forces on a more or less equal basis, it would probably end up as a full-scale civil war.

That’s the “Syrian” model. Non-violent young Syrian protesters demanded an end to the tyrannical Assad regime in early 2011, and were shot down in such numbers that their leaders were displaced by more violent people.

At that point, many conscript soldiers defected to the anti-regime side too, and the confrontation morphed into a nationwide civil war that lasted an entire decade. About half-a-million Syrians were killed, almost half the population is still displaced internally or abroad and most of the country is in ruins.

And the tyrant is still there.

Multiply that by four, and you have a vision of what Iran could look like if an originally non-violent pro-democracy movement were driven to take up arms against a ruthless regime: the entire country devastated, with tens of millions of people displaced.

To say this is to rain on the protesters’ parade, but it cannot be helped. The day may come, in five or 10 years, when enough of the regime’s staunch supporters have aged out and the economic misery caused by its isolation from the world is so extreme, that a peaceful transition to a different kind of Iran becomes possible. But that day has not yet arrived.