US$2 ‘compensation’ for 2018 army shooting victims 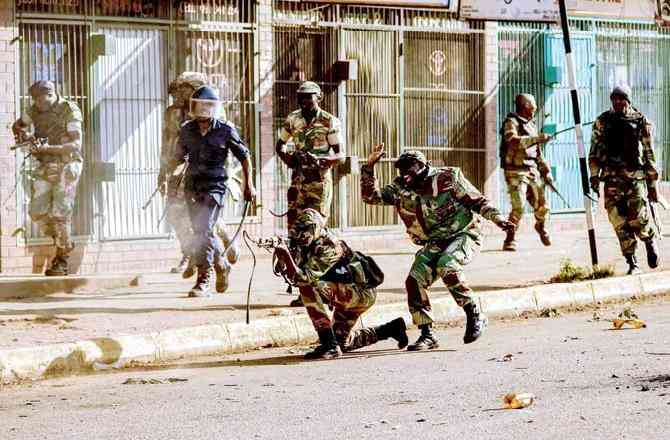 GOVERNMENT reportedly gave $1 000 only as “compensation” to families of the August 1, 2018 army shooting victims, NewsDay Weekender has learnt.

The amount, given to assist burial of those killed by army personnel during the post-election protests over delayed announcement of presidential election results, translates to less than US$2.

Families of the six people killed during the disturbances opened up this week saying wounds of the incident are still fresh.

President Emmerson Mnangagwa narrowly beat opposition leader Nelson Chamisa in the disputed elections, with the case spilling into the Constitutional Court, where Chamisa lost the challenge.

Thirty-five others were wounded in the shootings in Harare’s central business district.

The killings hogged the international limelight, forcing Mnangagwa to appoint a commission of inquiry, headed by former South African President Kgalema Motlanthe, to investigate the killings.

Among a raft of recommendations, the commission said families of the deceased should be compensated and that perpetrators be held accountable.

Last week, the Crisis in Zimbabwe Coalition (CiCZ) hosted a roundtable discussion to measure progress on implementation of the recommendations of the commission, and victims of the deceased expressed sadness over their neglect.

Alison Charles, who lost her brother Galvin Dean, could not hold back her tears saying her brother “was killed like a dog”.

“My brother died like a dog. He was never a violent person,” Alison said in-between tears.

“I have tried litigation to no avail. The government is untouchable and unapproachable. The only compensation we got from the government was the $1 000 deposited into our accounts to cover some funeral expenses.

“It was not even enough at the time as we were assisted by loved ones and friends.”

Maxwell Tauro said he wanted justice to find closure over the killing of his son Charles Tauro.

“I found out on social media that my son was shot, but I did not believe it,” he said

“My wounds are still fresh. I can’t even maintain my son’s grave because I have no money. He was our breadwinner.

“I am also demanding justice. We need to know the perpetrators.”

CiCZ chairperson Peter Mutasa said August 1, 2018 brings sad memories, and expressed regret that there is no will on the part of government to compensate the victims.

“We look at the August 1, 2018 shootings with sadness and grief as deceased families are yet to be compensated four years after the shootings,” Mutasa said.

"We are continuing to engage the commission and we have written to them and I don’t know if it’s bad or good news. Our secretariat has just received communication with the Motlanthe Commission to engage again on September 30.”

Opposition leader Linda Masarira, who testified before the Motlanthe commission, later donated five bags of cement to Tauro for his son’s grave.