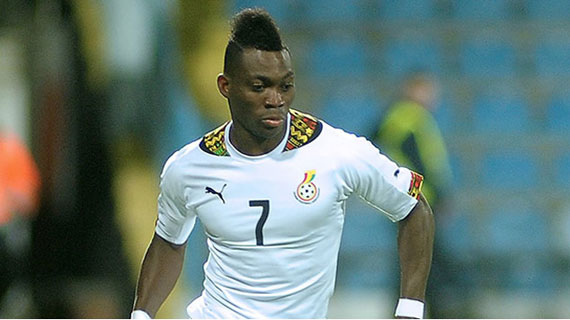 A brace from Christian Atsu helped Ghana to a 3-0 win over Guinea in the quarter-finals of the 2015 African Cup of Nations at the Estadio de Malabo on Sunday.

MALABO – A brace from Christian Atsu helped Ghana to a 3-0 win over Guinea in the quarter-finals of the 2015 African Cup of Nations at the Estadio de Malabo on Sunday.

The Black Stars got off to a flying start after some swift work in attack saw Mubarak Wakaso with a clever back heel for Atsu to side-foot the ball home from eight-yards out in the fourth minute,  to make it 1-0.

After that Guinea took control of the possession stakes, but they failed to break down a stubborn Ghana defence and they were not assisted by poor decision making in the final third by their attackers.

The next decent chance on goal only came in the 39th minute when Ghana broke from defence and played Asamoah Gyan into space on the edge of the box, but he saw his shot well-saved by the keeper.

A minute before the break Guinea were their own worst enemies when a miscued clearance from Baissama Sankoh saw the ball fall to Kwesi Appiah and he made no mistake, passing the ball through the legs of the goalkeeper in a one-on-one, making it 2-0.

Ghana dominated proceedings after the break and made certain of the win in the 61st minute when Atsu curled the ball home from 25-yards out on the right side of the big box, making it 3-0.

Guinea tried to find their way back into the game, but they were unable to do so as Ghana moved onto the semifinals of the African Cup of Nations.

The game ended on a rather sour note for Guinea who saw their goalkeeper, Naby Yattara, red carded in the 94th minute after bringing down Gyan just outside the box.