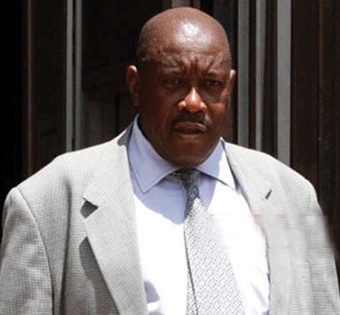 ERNEST “Maphepha” Sibanda’s disqualification from contesting the Highlanders chairmanship post has invoked deep-seated emotions from club members who say the whole process was flawed from the start.

The electoral court, headed by Luke Mnkandla, said they had disqualified Sibanda under article 10:7 of the constitution which reads: “The nomination court is empowered to receive nominations of candidates, to vet them, approve or disqualify any candidates and in doing so it shall be guided by provisions of article 9 of this constitution.”

Article 9 of the Highlanders constitution is the qualification for executive committee positions and has three sections. Article 9:1 — a prospective candidate for any position in the executive committee must be a current fully paid up member of the club who has been so for an uninterrupted period of at least 2 (two) years, immediately preceding his nomination.

Article 9:2 says: “Such prospective candidate for any position in the executive committee must not be an unrehabilitated insolvent and must not have been convicted in the 10 years immediately preceding his nomination of any crime involving dishonesty for which he has been sentenced to a term of imprisonment without the option of a fine or to a fine exceeding $50 000 or to both such fine and such imprisonment.

Article 9:3 addresses the qualifications of a treasurer.

“There are a lot of things which could have been avoided.”

Ncube said the matter had not been dealt with well by Highlanders.

“There is a statement from the board secretary (Jimmy Ncube) which said that Maphepha could contest for any post,” said the Bulawayo businessman.

“They raised false hope only to be told that he could not contest. They should not have allowed him to pick up the nomination papers. That was a bad thing they did.”

He said he was not at liberty to disclose the reasons as they would be announced at the annual general meeting.

Football analysts said the club had erred in declining his nomination as they were not following precedence.

“When we go back to the Highlanders history, this is not the first time that a person has been sanctioned by the club,” said the analyst who chose anonymity.

“If you go back to the time when Ndumiso Gumede ran the club, you will find that there were irregularities.

He added: “All these people were brought before the Highlanders members who pardoned them and the club moved on. None of them were ever sanctioned by a court of law.

“Then came Maphepha’s issue. The case was presented to Sandi (Dumisani then Highlanders board chairman) who acknowledged that the matter had been dealt with and was water under the bridge.”

He said Nhlanhla Dube brought it up again in 2009 when Themba Ndlela was voted into office and again the electorate was told that Sibanda had been pardoned by the board.

“They did not take away his membership therefore he has always been a member of Highlanders,” said the analyst.

“He was suspended for two years and was inactive from Highlanders affairs, but again during that time he was still a member. I do not support any of them, but we should uphold integrity at the club.

“In the first place, they should not have collected his nomination fee. That is fraud. They should have a list of all the people that cannot contest either because they are suspended or banned. If they had all those records this would not have happened. They should have stopped him from submitting from the onset without letting the electoral court sit. The whole process is flawed.”

Another analyst said if Sibanda was still being sanctioned for issues that happened close to 10 years ago, Dube should be challenged over the $25 000 for the bus.

“Things should done fairly,” he said.

“If Sibanda is being questioned about the Tarumbwa issue, Dube should clear his name on the issue of the bus which is still pending. No one should be better than others.

“If this is the new precedence then everyone who has been sanctioned by the club should not contest. The other question is why were there only three out of six in the electoral committee?”

He said the nomination process was illegal based on the fact that three of the electoral court members were not available.

“The six of them should have discussed the anomalies in the nomination process and not postpone the process until Monday,” he said.

“Where were the other three? It is not the first time we have had this issue and none of them were ever convicted in the court of law. If they are bringing up the Asiagate issue, then why do we still have the likes of Methembe Ndlovu, Luke Masomere and all the players still active? They were pardoned, period!”

He said they do not appreciate that the club has been taken over by the board who are non-executive members, but are making decisions for the executive.