Katsande back in Warriors squad 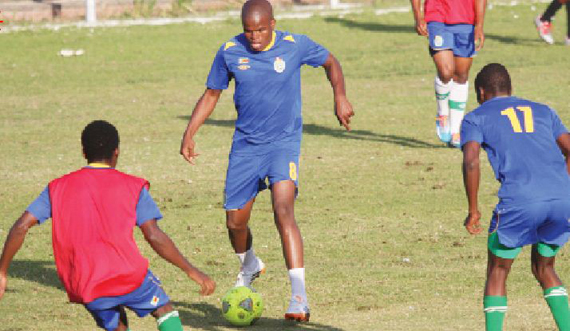 KAIZER Chiefs midfielder Willard Katsande is back in the Warriors squad.

KAIZER Chiefs midfielder Willard Katsande is back in the Warriors squad.

The Zimbabwe international midfielder, who missed the first leg to Tanzania after a late withdrawal citing a stomach bug — a development which had angered coach Ian Gorowa — said he was ready to face Tanzania after he settled his issues with the coach.

He was part of the squad that trained at Gateway High School, Harare, yesterday morning.

“I have spoken with the coach and we have settled everything. I would not have been training with the team. I am grateful to get this opportunity to play for my country again. I have always said I love my country and always want to play for the national team.

“It’s important for me because when I retire, I will sit down and look back to see my achievements with the national team. Now I am focused on the game against Tanzania on Sunday,” said Katsande who had an outstanding season with his club Kaizer Chiefs and was voted the best player.

The Zimbabwean midfielder also expressed confidence on the Warriors qualification. “I have to give everything on Sunday. A 0-1 defeat is not a big margin. We need to get an early goal and we will be calm. That will determine our qualification,” Katsande said.

Gorowa had expressed his disappointment with the Kaizer Chiefs anchorman following his late withdrawal, but yesterday they buried their differences and immediately got down to business.

Belgium-based forward Ovidy Karuru and South Africa — based Denver Mukamba were the players who did not make the squad for the first leg, but trained with the rest of the team.

Al Ahly Benghazi forward and winger Edward Sadomba was, however, not part of the squad, but is expected to arrive today.

Team manager Shariff Mussa said Sadomba had been delayed in Tunisia after playing in the Champions League for his club on Saturday, but Zifa was still to get hold of his club to find out about his travelling arrangements.

“We are still to get hold of his club to get his itinerary and we are now expecting him tomorrow (today). We are also still expecting Kuda Mahachi who is with Mamelodi Sundowns to join camp. As for Rio Moyo, he has an ankle injury and the doctors will have to assess him again later this evening (yesterday),” said Mussa.

However, Moyo who sat out the morning training session, appeared to rule himself out of the Sunday match. “I am out of this match. I have an ankle injury and will need at least two weeks to recover,” he said.

The Warriors, who fell 0-1 to Tanzania in the first leg in Da es Salaam need to score two clear goals on Sunday to overturn the deficit and advance to the next round of the qualifiers in which they will face either neighbours Mozambique or South Sudan. Mozambique trounced South Sudan 5-0 in the first leg and are favourites to advance.