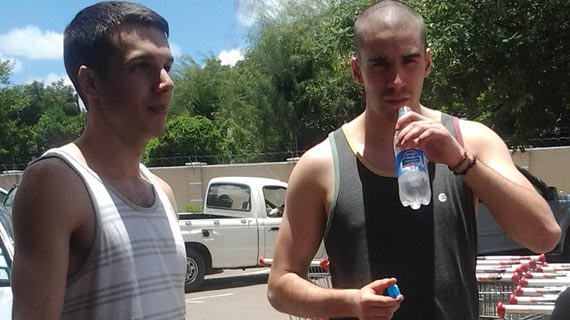 FMSA Zimbabwean representative Allan Mpofu yesterday said the two players had met Highlanders chairman Peter Dube and arrangements had been made for them to join camp. Mpofu had said he would be driving them to Inyathi later in the day.

“We have met with the executive and it has been agreed that the boys join camp in Inyathi. They actually met with the chairman this morning (yesterday) and they have been much welcomed. I will actually be driving them to camp later in the day and hand them over to the technical team.

“After that it will be the technical team which will make comments on the boys, not me,” Mpofu said.

Highlanders treasurer Jerry Sibanda confirmed that they had met with the two players, but said he had to leave the meeting early, referring questions to chairman Dube, whose mobile phone went unanswered.

Barriault (20) and Lemieux (19) arrived in Bulawayo from Johannesburg, South Africa, on Sunday morning for a six-month attachment at Highlanders. If they impress the coaches in pre-season, they might be registered for the Premier Soccer League (PSL).

On Saturday, the two said they were looking forward to impressing the Highlanders coaches and playing in the PSL with goalkeeper Lemieux saying he wouldn’t mind a long contract with the Bulawayo giants if the coaches wanted him.

Their move to Highlanders was facilitated by FMSA director Isaac Mbedzi, a Zimbabwean coach based in Canada and the academy and their parents are taking care of their stay in Zimbabwe.