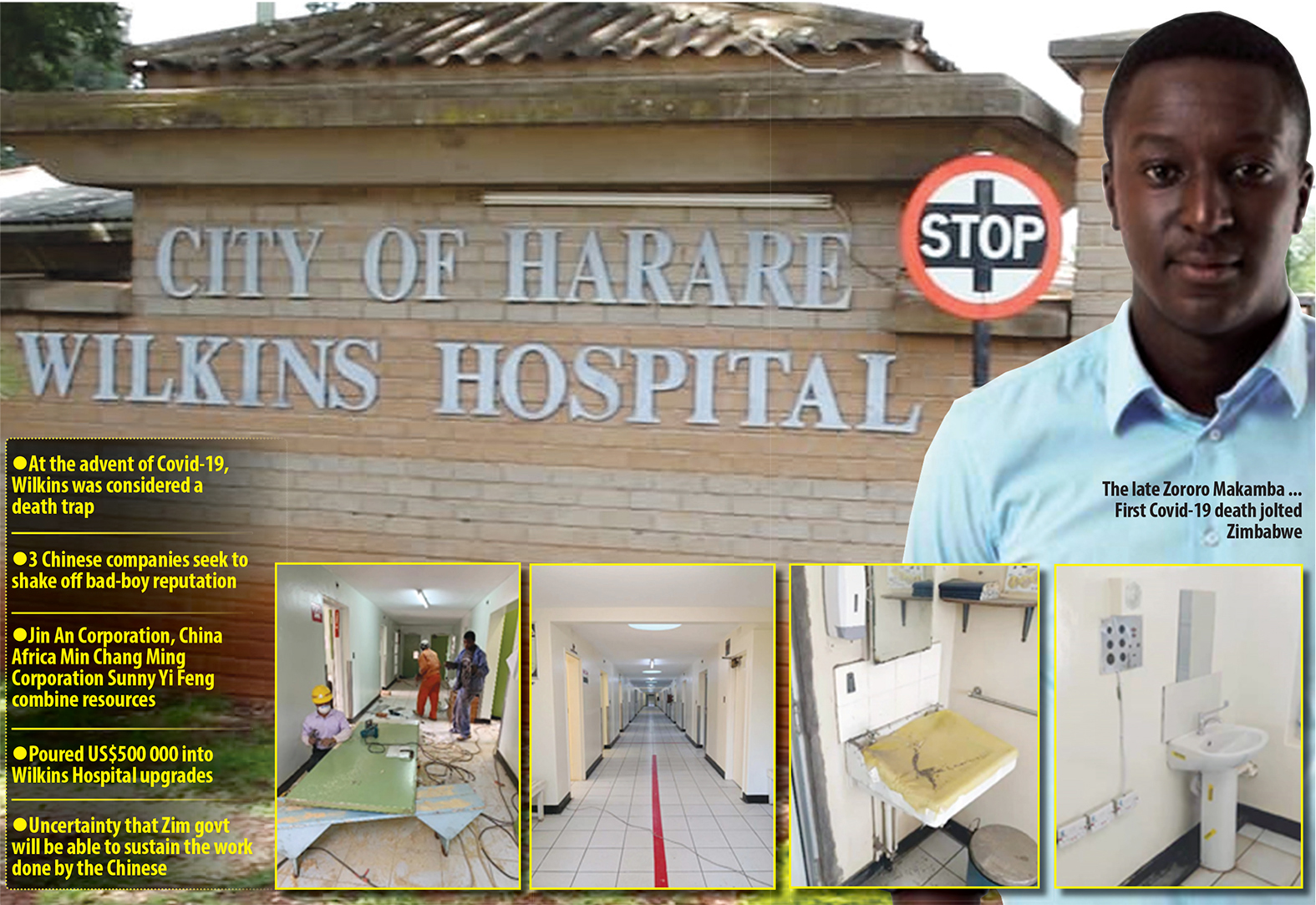 Miriam Mangwaya DESPITE the bad-investor tag, some Chinese entities ploughed half a million dollars to upgrade one of the country’s referral hospitals to fight Covid-19 in early 2020, but it is uncertain if the government will be able to sustain the gains. It started with the death of a 30 year-old local broadcast journalist, Zororo […]

Miriam Mangwaya DESPITE the bad-investor tag, some Chinese entities ploughed half a million dollars to upgrade one of the country’s referral hospitals to fight Covid-19 in early 2020, but it is uncertain if the government will be able to sustain the gains.

It started with the death of a 30 year-old local broadcast journalist, Zororo Makamba, who became Zimbabwe’s second confirmed Covid-19 case and passed away on March 23 of the same year, two weeks after his return from New York. His death, which came with course-changing developments, was officially recorded as the first, as Covid-19 hit Zimbabwe.

Death trap The Makamba family was bitter with the way in which Zororo was treated and believed that his death could have been avoided. In a statement issued immediately after Zororo’s death, the Makamba family directed its anger at Wilkins Infectious Diseases Hospital and the government for being ill-prepared to deal with Covid-19.

Wilkins was a death front because it had no ventilators, oxygen, running water or drugs, charged the family.

Nurses and doctors had no protective clothing, it took too long for the hospital staff to admit Zororo, and the available medical staff was not readily accessible.

When a ventilator was finally brought in to attend to the journalist, no-one had the slightest idea how to use it. The Zimbabwean public health infrastructure was already run down. Worker protests were frequent due to poor working conditions, there was a severe shortage of drugs in all public health centres that were understaffed and patients were being sent back home to die.

Three Chinese investors based in Zimbabwe quickly stepped in to upgrade Wilkins Infectious Diseases Hospital, a municipality-run facility that subsequently became the first and biggest Covid-19 isolation and referral centre.

Enter the dragon Two mining outfits — Jin An Corporation and China Africa Min Chang Ming Corporation — as having combined resources with the multi-million tile maker, Sunny Yi Feng, and poured in US$500 000 to upgrade the troubled health centre.

But the companies would not reveal how much each of them contributed towards the upgrade of Wilkins, nor the exact sources of the funds. Their project focused mainly on the two expansive ward wings at the hospital’s isolation centre — it was discovered during tours and interviews — to cater for Covid-19 cases only. Due to Chinese investors’ bad-boy reputation, the investment at Wilkins generated mixed reactions. Cynics regarded it with suspicion while the government hailed it as ample evidence of Chinese goodwill. At that time, Sunny Yi Feng was already in a storm as reports of widespread labour rights abuses trickled in. A year after — in 2021 — the Zimbabwe Congress of Trade Unions released a lengthy dossier of rights abuses at the firm. Media coverage of the Wilkins refurbishment project was polarised, too, resulting in ad hoc and sometimes unbalanced and scant reporting on the Chinese intervention.

A throw-back probe done in collaboration with Information for Development Trust, a non-profit organisation supporting investigative journalism in Zimbabwe and southern Africa, showed that the Chinese intervention had changed the game at Wilkins as the country was just waking up to the horrors of Covid-19. Wilkins, formerly the European Infectious Disease Hospital, was inherited by the Harare City Council after independence in 1980 to cater for infectious ailments. The health centre has no defined catchment area, which means it draws patients from all over the capital — with more than 1,5 million people — and areas beyond. Before the renovations by the three Chinese companies, Wilkins was fast turning into a desolate and gaunt complex.

Improved Hospital staff are quick to hail the renovations that were made from materials mostly imported from China; Chinese workers also provided labour. The head of the nursing staff, Priscilla Luwizhi, described the upgrade as a life saver.

“After the renovations, we were able to offer expanded services for Covid-19 treatment,” Luwizhi said.

Nurses and doctors were threatening to leave for other pastures, she added, because they were exposed to infectious disease due to lack of protective materials, requisite equipment and drugs as well the deterioration of the buildings and acutely poor working conditions.

“We thought we would lose nurses, who did not want to die from the virus, but thanks to the government-Chinese partnership, we retained them.

“The renovations beautified the area and created an environment that pacified the nurses amidst the psychological trauma they were suffering. Seeing how beautiful the place is now, who would not want to work here?” added the chief nurse.

Before the 23-day renovation cycle started, Wilkins had 35 beds in the two ward wings. But demand for beds was increasing and Wilkins was finding it hard to cope as coronavirus cases surged in a short space of time. Twenty-five beds were quickly added, with 10 reserved for the Intensive Care Unit (ICU), interviews with staff and the investors revealed.

The wards have been transformed into state-of-the-art nursing facilities, complete with television sets that the head nurse said relieved patients’ stress.

The ablution facilities that had become run-down and were constantly getting clogged also received a facelift, it was established during the tours made to the hospital.

Some of the ablution facilities before renovation and potable water is now in constant supply. Potable water is now constantly available. To ensure uninterrupted power supply, the Chinese investors also installed a powerful back-up generator.

An industrial tank was set up within the hospital premises to provide piped oxygen to the wards, in addition to the installation of two ventilators. This enabled Wilkins to replace the gas cylinders that the nurses who were interviewed agreed posed serious accident risks. One of the isolation ward wings after renovation. One of the hospital nurses, Fadzai Jamare (30), said the renovations and supply of equipment were a morale booster.

“After the renovations, the environment is now conducive for us to do our work properly and safely,” she said.

“We also received modern equipment necessary for Covid -19 treatment. Of interest is the CCTV which enables us to constantly monitor patients who are in isolation, while we avoiding frequent contact with them. We, however, need piped oxygen in all hospital wards and also for some of the rooms that have not been fully-equipped,” she added.

Covid-19 in-patients like Elvis Dube (not his real name) are happy with the renovation results.

“Service delivery from the nurses is excellent and, in the wards, the general outlook is comfortable.”

Jin An Corporation managing director, David Zhou Jin, said all the money came from the Chinese investors and none from the Zimbabwean government.

“The renovations that we did were close to starting the construction from scratch.  No company was forced to donate towards the refurbishments. The renovations also created employment for at least 60 locals,” he said.

“We were afraid more people could lose their lives if we did not help the government of Zimbabwe improve access to health services.”

Foreign relations, humanitarian aid And the decision to give health support to Wilkins reflects amply on the foreign relations between Beijing and Harare. It also underlies a deliberate plan to boost opportunities for Chinese investors. Cheng Guo Feng, the Sunny Yifeng Investment Corporation managing director, said the hospital upgrade was meant to strengthen the ties between China and Zimbabwe.

“The donations were in support of President Emmerson Mnangagwa’s decision to welcome foreign investors. They were meant to strengthen China-Zimbabwe bilateral relations,” Guo Feng said.

“Besides, the Covid-19 pandemic is affecting everyone, regardless of nationality. Therefore, we saw it prudent to improve the health service locally since we are staying in Zimbabwe where we are investing.  Having operated in Zimbabwe for over four years, we have seen that the country is ideal for investment.”

The Zimbabwean Foreign Affairs portfolio was speaking the same language, saying the Sino-Zimbabwe relations had been migrated from “all-weather friends” to “comprehensive strategic partnerships” since President Emmerson Mnangagwa took over from the late Robert Mugabe with military help in 2017.

“Relations between Zimbabwe and China continue to grow from strength to strength each year,” Foreign Affairs minister Fredrick Shava said.

“It is also worth noting that China has remained a strategic partner in the health sector through donation of vaccines,” he added.

There was an ongoing partnership between Zimbabwe’s biggest public health centre — Parirenyatwa Group of Hospitals in Harare — and China’s Human Provincial Hospital, revealed the minister.

“The Chinese business community through the Chinese Embassy in Zimbabwe have also donated PPEs and other medical supplies to the government to assist national efforts in combating the Covid-19 pandemic,” Shava said.

For Leo Wang, Sunny Yi Feng public relation manager, Chinese companies ought to ‘give back to the community’ in Zimbabwe.

“Where we can help, we will offer assistance, not only in the health sector but in very other sector where there is need,” Wang said.

Independent health associations like the Community Working Group on Health, warned against overdependence on Chinese aid, though, amid fears that the government may not be able to sustain the improvements made at Wilkins. Hospital staff indicated that there was need to add more equipment, oxygen supplies and general improvement of the hospital.

Promises and claims But there is no evidence yet that the government and the Harare municipality have moblised funds to continue with needed upgrades at the referral hospital, in spite of the hanging claims of supporting the hospital. The Health ministry secretary, Jasper Chimedza, insisted that government had ploughed in more money for further renovations than what the Chinese investors had done in the first place.

“We have availed money for renovations at Wilkins way more than the Chinese business people injected,” Chimedza said.

But he would not say how much, nor what renovations the money was being used on.

There were no signs of major upgrades after the Chinese donations when visits were made to Wilkins in recent months during this investigation.

Chimedza evaded the question on whether or not the government-sponsored renovations had already commenced.

The Wilkins administrator, Andrew Tapera, also insisted—without giving figures — that the government had provided funds for the installation of piped oxygen in “some wards”.

“The government has funded all the medical costs and food for Covid-19 patients,” he said.

A 2019 report by the African Development Bank (AfDB) pointed out that Zimbabwe needs over $34 billion in the next 10 years to upgrade its infrastructure to achieve sustainable levels of economic growth.

An ANC official and senior medical officer for Limpopo province spews Nazistic and hypernationalistic sentiments that go beyond the ideals of the medical profession against a stricken patient waiting to receive medical attention simply because the patient is Zimbabwean.

The increase in Reserve Money was primarily driven by growth in required reserves by ZW$351,88 million and an increase of currency issued by ZW$121,51 million.

This U-turn came as a surprise because he and his cohort in the opposition are credited with calling for their imposition.

By The Independent Aug. 26, 2022
Change of infrastructure financing model needed

By The Independent Aug. 26, 2022
Gold coins tighten RTGS supply in the interim

By The Independent Aug. 26, 2022
Balance competing truths on Western sanctions