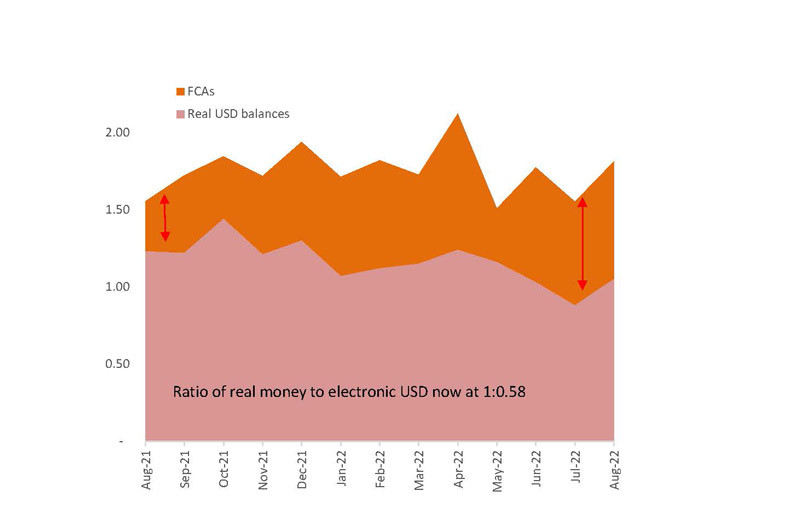 Zimbabwe has enjoyed a rare moment of economic stability over the last three months providing a sigh of relief to citizens and businesses alike. For government it has however not been a smooth ride as sacrifices through unconventional policy tools had to be made risking costly payoffs which may outrun the short-term benefits derived from the current stability. Government through Treasury and the Reserve Bank of Zimbabwe has instituted a raft of measures meant to cushion the currency and stem a freefall which almost led to its extinction just a few months back. As the country enjoys the ride, which now appears to be under threat given the movements on the parallel market after months of stability, a huge storm may be brewing which, if unattended, could grip the economy by surprise and lead to another currency crush.

The results are shocking and point towards yet another pending currency crush brewing from electronic creation of US dollar credit.

A growth in electronic USD balances which is not matched by a growth in the underlying USD assets held by banks and other depository corporations, means the country is on a trajectory to another dollarisation catastrophe.

In 2019 government elected to liberalise the exchange rate, effectively admitting that balances which were accounted for as US dollars in the banking system were effectively a local currency.

The localised USD balances creation was stimulated by credit extension, largely to government, unlike in the current scenario where credit in USD is being extended to the private sector stimulating USD creation

From the current data released by the RBZ as at August 2022, foreign currency accounts (FCA) were valued at ZWL$991 billion. At the respective exchange rate of 546,8 at the end of the month, these balances were therefore valued at US$1,8 billion. This means that according to the RBZ, Zimbabwe FCA accounts stood at US$1,8 billion as at August. The position shows a growth of US$500 million since the beginning of 2021. Analysed in isolation, this statistic may show that Zimbabwe’s FCA position is improving and could reflect generation of more forex through trade.

True, the underlying source of forex typically has to be trade and exports but beyond trade other forms of forex creation are observed. For example, given the dual currency system, foreign-currency-denominated loans have increased in proportion and now account for over 60% of total loans in the banking sector, according to banks latest financials as at June 2022. What this means is that through interest payments, banks are creating USD balances which may not be directly related to production or backed by USD assets, thus growing the overall foreign currency account balances as measured by the RBZ’s narrow money.

On the RBZ books, the FCA balances are liabilities which means that they have to be matched by assets on depository corporations balance sheets, in the form of real liquidity. These corporations are local and foreign banks together with other local depository institutions.

An outcome which shows higher liabilities (FCA positions on RBZ books) levels against assets (banks books), points out that the USD net balances are grossly inflated or simply not backed by real cash. On the assets side, August data by the RBZ gives a total foreign notes and coins of ZWL$263,6 billion which deduces to about US$400 million. We further add balances with foreign banks valued at US$500 million to arrive at a total of 900 million. Adding statutory reserves and other ancillary balances takes the total foreign currency assets to about US$1,1 billion. This balance is way too low compared to that shown by the RBZ as liabilities due to Zimbabwean depositors.

The RBZ has not disputed this variance. In a recent address the Governor highlighted that the total FCAs is now about US$2,1 billion which is even higher than the August levels captured above.

He said the bank balances foreign notes and coins as well as nostro balances are now in the region of US$1,3 billion from the US$1,1 billion we captured above, leaving out a variance of US$800 million, US$100 million higher than August levels.

The net position of electronic foreign currency balances created through the Zimbabwe banking system is exponentially growing and is now at about US$800 million. The practical challenges with these balances are that they create settlement challenges and a recurring contamination challenge.

The settlement challenge regards the ability of banks including the RBZ to clear international and domestic obligations by holders of USD accounts.

This challenge manifested at the height of dollarisation when wired USD RTGS balances began to be discounted for real cash.

The same as mobile money. This led to unofficial exchange rates before the devaluation of the currency in 2019.

So, between 2014 and 2018 Zimbabwe massively went on an overdrive to create electronic USD balances largely through government borrowings via Treasury Bills. The same is now happening through banks credit extension to borrowers either commercial or individual.

Is it a bad thing for banks to extend credit to the private sector? Local banks are trading at suboptimal loan to deposit levels now at slightly above 50%.

For most of the period since 2010, the loan to deposit ratio fared way below 45%, which meant that banks were no longer focusing on core business or optimally sweating their assets.  Increasing lending activities after factoring risk, increases return on assets (ROA) and earnings (ROE) position.

The key challenge was that the quality of borrowers had diminished with the deterioration in the economic environment and that most of the deposits were transitory.

At a point Banks were not sweating FCAs the RBZ charged them to be innovative and take advantage of the growing position to sweat the liquidity.

While most of the loans are being extended to the productive sector, there is clearly no commensurate growth in real forex earnings given the lagging exports receipts growth which should create the hard balances to clear settlements.

The economy is therefore moving towards another potential discounting of electronic balances beyond the present levels. RBZ will have to possibly cap USD loan levels by instituting ratio against total deposits or as a fraction of the total loan book.

The delicacy requires stepped up efforts to increase real flows into the economy through direct investments and similar endeavours.

Equally the local productive base has to be spurred to support the growth in exports currently being experienced, to avert the potential crisis.