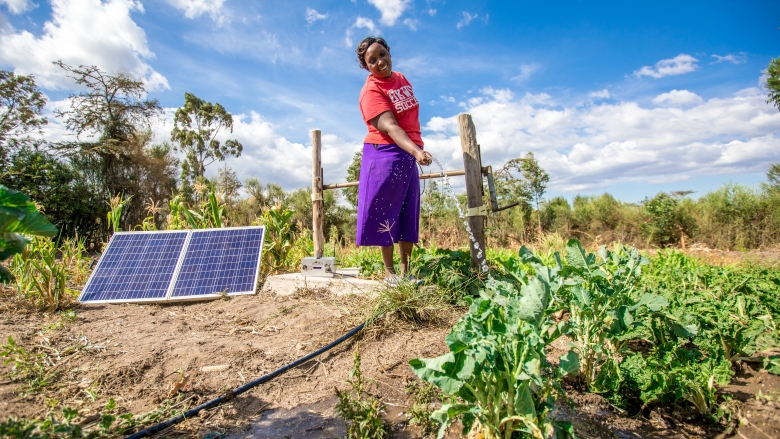 The good news is that farms have begun implementing a more energy-efficient power source, and it’s starting to show significant benefits.

THE United Nations estimates that over 280 million people in Africa experience food insecurity. Many rural farms and homes have been without an adequate power source, harming food production and preservation.

The good news is that farms have begun implementing a more energy-efficient power source, and it’s starting to show significant benefits.

Many rural areas have been without power because there is little progress in expanding the continent’s power grid, and it can be expensive to connect even if someone has access. This has forced residents to come up with other solutions, such as burning wood or kerosene to cook and have light.

African villages first embraced solar power in the 1990s. However, farms didn’t need their crops to have more light than they already received from the sun.

Over time, farmers have been able to utilise the sun’s energy to power various systems and produce two to three times more yield than before, adopting new ways to become more efficient in the process.

Rural African farms used to rely solely on rainwater to irrigate their fields, which limited their growing season to the three-to-six-month rainy season. However, solar-powered drip pumps have expanded the amount of planting farmers do each year.

This method employs tubing along rows of plants, providing a slow trickle of water directly to the root of crops. This system is beneficial to farmers in many ways.

Another struggle for small farms in Africa is the lack of refrigeration. Without it, preserving food and decreasing the amount of harvested produce that makes it to a table is difficult.

Up to one-third of all food harvested in Africa goes bad due to the lack of refrigeration. Keeping it is vital to decreasing hunger on the continent.

Generally, the various solar energy initiatives and projects in Africa are employing tens of thousands of employees.

Experts estimate half of the new energy installed in Africa by 2050 will be renewable sources, including solar.

As solar equipment prices continue to drop, it is likely that using these resources will become advantageous over traditional energy production and will continue to power farmers around the continent, regardless of their size.–Further Africa

Zimbabwe will develop greatly and reclaim its status as the breadbasket of the Sadc region.

The future of Zimbabwe is in the hands of young people.

What people don’t know is that Chamisa is a unifier.

He is assured of victory considering how Zanu PF has mismanaged this country, worsened by the fact that the majority of Zimbabweans are starving and unemployed.

That Zanu PF has resorted to violence, as evidenced by what transpired in Chitungwiza last month, is testament that the ruling party is losing ground.

The harassment and arrest of opposition activists and leaders such as Job Sikhala and Godfrey Sithole on trumped-up charges are the last kicks of a dying horse.

Mnangagwa is trying to create a fake impression that he will win.

When God spoke to Saul through Prophet Samuel, he said: “Today, I have taken the kingdom from you.”

And 38 years later, God placed David as king over Israel. What is happening in Zimbabwe is very prophetic.

God has already chosen his David in Zimbabwe as President. Zanu PF was given 42 years to rule and now its time is over.

CCC will be the ruling party from next year.

It will not be a government of national unity, as some people would want to think.

If God is with Chamisa, who can win against him?-Mai Ruru

Nepotism is basically an act of deliberate favouritism shown in workplaces by the relatives or friends of the employer and it might have a negative impact on the community and people’s lives.

With unemployment biting every part of the Zimbabwean society, favouritism has become the order of the day. To date, finding a job has become so industrious and tiresome in Zimbabwe.

With a stagnant economy, employment opportunities continue to shrink, resulting in desperate means to secure jobs and favours.

As millions of Zimbabweans struggle to have a footing professionally, the Zanu PF government has resorted to politics of patronage and awarding of opportunities like scholarships and civil service placement to its cronies.

The Presidential Scholarship is one such testimony of patronage politics and reward to Zanu PF loyalists and their supporters.

In many cases, Zimbabweans have labelled the Presidential Scholarship scheme a mere party opportunity that does not benefit the intended vulnerable and disadvantaged students.

The tradition of getting opportunities based on who you know and whom you are close to has not only affected the quality of the work and performance, but also the general moral fabric that society is supposed to preserve.

This situation is not only destroying the moral fabric of society and the power of work, but also threatening individual dignity and effort that citizens are displaying in their different professions and areas of work.

Nepotism at the higher management or leadership levels will greatly spoil the company’s image and growth.

Leadership roles are very important for the organisational culture and growth.

It is recommended that government should enforce laws and rules in the Constitution which do not allow nepotism in workplaces.

Also, the company or organisation should have its Constitution and it should have a chapter which forbids nepotism and those who practise it should be sued or pay heavy penalties.

The Zimbabwe Anti-Corruption Commission should also rise to the occasion and inspect how companies and organisations are running in terms of nepotism and corruption in workplaces.

The anti-nepotism and anti-corruption campaign should start from the high government officials, setting precedence towards a strong work ethic. Corruption is an unnecessary evil for success in any sphere. Nepotism, as part of corruption, should be banned as it stifles economic development.-Mukunda Chitova